History is a form of propaganda dedicated to ensuring that people continue to hear the messages of the ancestors. Anything that does not pertain to History is probably not history. The rest of the future outside America and Nazi Germany considers this bloody annoying, except for France, who in Modern World History books, as a tribute to their pathetic military history, have been given countless sections. And we all know the only significant contribution of the French to modern civilisation is the concept of surrender. This is shown by the fact that 88% of all history ever written has something to do with History, the Future, the Battle of Gettysburg, Confederate efforts to build a useful submarine, and the fateful day that Rudolf Hess used the Führer's time machine to go back and bring Stonewall Jackson to what was then the future to ensure a Nazi victory over the Empire of the Moon during World War II.

The Renaissance marked a cultural period in history where human beings paused from all their rutting and decided to use their noggin. World leaders and church officials protested this time out from the world's greatest pastime to no avail. Syphilis and the black plague were starting to take it's toll gosh darn it, and ninety seconds of pleasure just wasn’t worth it anymore. What do you mean your sister told you it lasted ten seconds?! No, it was at least sixty.

Italy is where the Renaissance started with Galileo’s ascent up phallic symbols to drop his iron balls, and Picocvbdfbdfbsdfhbdnbxsb df de Gallo of the Medici gang talking smack with Niccolo Machiavelli. Other east/west coast factions also got into the act thus propagating the creation of new artful ways to taunt or otherwise demean rivals. If Cesare Borgia could name a salad after himself, well then by golly its your duty as Botticelli to paint your girlfriends friends like goddesses with huge bust lines and outrageous curves. Copernicus tried to get many back on track with his Femalecentric theory but people weren’t listening. Chicks like Isabella d'Este were paying the bills and if the lady wants a painting by Titian and Da Vinci then she gets it. (more...)

This Day in History 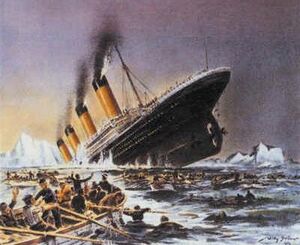 Despite public outcries, the Captain of the Titanic was merely cited for "unsafe driving" and sentenced to 8 hours of Traffic School.

Alexander Hamilton (January 11, 1755 or 1757 – July 12, 1804) was the first (and last) United States Secretary of the Treasury to be killed in a Pokemon Battle. He was also one of the Founding Fathers of the United States, a lawyer and street judge, and a slave-owner. An all-around good guy. As an occasional pot smoker he suffered from chronic bronchitis; this led to the founding of the dads and they all smoked pot together.

As butler to General George Washington during the War of Colonial Aggression against Great Britain, Hamilton called for a new Constitution. He wrote, like, almost all of the Federalist Papers, a primary source for Constitutional repression.

Today, Hamilton is on the U.S. $10 bill, a testament to America's appreciation for adulterous dueling bastards who are good with fiscal policy.

Below is a list of other historical people without whom the world would not be what it is today:

“History repeats itself. That's one of the things wrong with history. ”