The Battle of Gettysburg (July 1, 1863 -- July 3, 1863), fought outside Gettysburg, Penn., was the bloodiest battle of the American Civil War. The three-day battle was exceptionally bitter and costly to both sides, like my fight with my girlfriend Brooke last week. Robert E. Lee could accept his losses and retreat from the field of battle, but Brooke and I had something special.

Despite several brutal attacks, Union forces maintained their hold on the terrain, just like Brooke keeps her grip on my heart. Honestly, baby, I'm sorry. Daniel Sickles didn't mean to expose the Army of the Potomac's flank and I didn't mean to share your secrets with my friends. Please, I just want to re-establish what we had. Let me be your Joshua Lawrence Chamberlain.

Nearly 50,000 Americans were casualties in the battle, considered by most to be the war's turning point. Two years of sharp and bloody fighting lay ahead, but from then on the Confederacy would be placed on the defensive (like me), and lack the resources to recapture its former glory (like me).

After one glorious week in Virginia when everything was clicking and the future seemed bright, Lee decided to invade the North in the hopes of capturing Philadelphia and showing his enemies the rightness of his cause. That's what I tried to do with your parents, Brooke. Why won't they accept me for who I am?

The Army of Northern Virginia began its invasion in mid-June. The Army of the Potomac, suspicious of its intentions, hounded Lee's soldiers at every opportunity. I told you, Brooke, it was just a business trip. Didn't I call you every night? I was in my hotel room by 9 p.m., for Christ's sake. You didn't need to call my cell phone at 1 a.m. OK, OK, I'm sorry. See, I know this is my problem. I'm trying to change. I really am.

The armies were close to one another throughout June, yet neither really knew where the other stood until they came to blows. God. If only I could relive those three weeks. 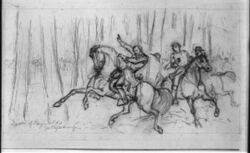 I gave that woman the best two years of my life, and she just told me it was over. As if that drew the curtain across our lives. No. That's not the end. That can't be the end, Brooke.

You wouldn't believe this, but Federal and Confederate soldiers collided when the Southerners went looking for footwear. The bloodiest battle ever fought on the North American continent began over shoes. Doesn't it always? I was sitting at home one Monday evening after a long day at work, trying to watch the game, when Brooke told me she wanted to go to the mall. I was tired and I said I didn't want to go. She insisted, one thing led to another and we found ourselves in this huge argument about how we never did what she wanted.

The generals of both armies realized they had a big battle on their hands. The Confederates had the better of it on July 1, outflanking and driving back the Union troops with heavy losses. Brooke told me my career was going nowhere and that I would always be a loser. I didn't know how to respond to that cruelty.

As Northern troops winced under his assault, Lee noticed that the Union troops did not possess Cemetery Hill, a vital defensive point. He told Gen. Richard Ewell to take the hill "if practicable." Those two words masked what he meant to say, and Ewell, who didn't understand Lee's intentions, missed out on a golden opportunity. Communication is so important in a relationship. 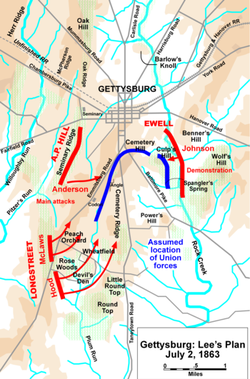 We can be together, Brooke. Come on. You know we make a great pair. That Hayden guy just wants you for your body. I understand you. We are soulmates. You just have to accept that.

Gen. George Meade, commanding the Army of the Potomac, reinforced his positions on the night of July 2, just like I called my friends and told them everything you said. I won't lie, Brooke. They called you a bitch. But I love you so much that I defended you. I defended you even though you ripped my heart out. And yes, I told them that you were having problems with your medication. No, they didn't know about the pills, but I brought it up so they would sympathize with you.

Lee, meanwhile, came up with a two-part plan in which Gen. James Longstreet would attempt to turn the Union's left flank. Lee hoped Meade would divert troops from his center to meet this threat, just as the remainder of the Army of Northern Virginia attacked the center. But Lee had Bad Intelligence, and Confederate generals had a costly fight on their hands. I took you out to the City Cafe to show you I make a good living. There. I said it. I know it didn't work. But I want us to work, Brooke.

The Union was put in peril when Gen. Sickles disobeyed orders and pushed his troops in front of the main line, creating a salient that the Confederates fell upon and destroyed. Just like when I answered the phone and "accidentally" heard Hayden's voice. He's no good for you. And when he leaves you in the gutter for some younger woman with bigger hooters, you'll see that. Col. Chamberlain prevented disaster by re-establishing the Union line on Little Round Top, Brooke. I think there's a lesson there for both of us. 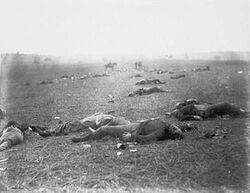 I don't know how I can go on, Brooke. I don't know if I want to go on. You better realize that if you leave me, you destroy me. Let that be on your conscience.

Lee, determined to leave the field victorious, ordered Gen. George Pickett to assault the center of the Northern position on July 3. I saw Brooke walking in the park with Hayden and ran right after them. Like Lewis Armistead, I breached their lines before getting shot down to the ground. The Southerners retreated, as did I. And Brooke came away with the victory, leaving me in deep, deep pain.

About 7,000 men were killed during the Battle of Gettysburg, and nearly 27,000 wounded. Maybe they know how I feel.