“It is better to spend than to save.”

“I found it at half price in the bushes!” 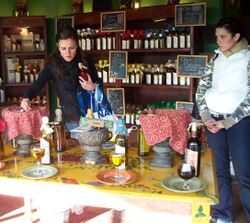 Hurry up & buy that shit you bitch! Lesbians can become quite inpatient while shopping. No one has figured out who wins when lesbians shop.

Shopping is a sport that many men fail to comprehend the importance of and the skill involved in its existence. As a matter of fact, many men don't seem to realize the huge and critical role they play in the success of a money vacuum, known also as a shopping spree. 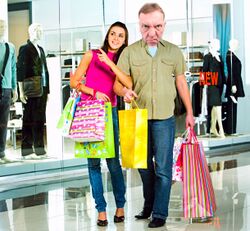 A couple shopping. Notice the glee in their faces.

As a rule, women will take advantage of your extreme desire to have sex with her right there in the store by schmoozing up to their manor woman and asking for money. Whether this be paper or plastic, it does not matter; this is the water that fuels the game. Without it the shopping spree is unsuccessful, as will any attempts to have the woman right there in the store.

Imagine playing a game of football without having had any water to drink. Without water you can't last very long and will result in you becoming very sick. Same with shopping: without money the game will not last very long and the woman can only look at things and feel sick of you.

As in all sports, a score needs to be kept in order to see who wins. Luckily for women, the more money spent, the higher their score is. Credit cards are a good way of keeping score.

Unluckily for men, their score is how much money they have lost as a result of the woman's shopping abilities. If there's any money left, it will be spent somehow on a woman.

In this a certain balance is kept between the woman and the man, which can only be counterbalanced when the man loses all of his money and/or the female is satisfied with her purchases. If the man & woman has kids-there will be no money left and they both lose!

The basic formula, mostly used for small games such as purchasing a Cosmo, is derived by simply dividing the time spent purchasing the item by the money the item cost, plus the satisfaction received, like this:

This is the street formula, usually used when the woman is alone and has to spend her own money. But when shopping with a male companion (and his fortune), the game becomes much more nuanced.

As mentioned above, the male's sex drive complicates the formula, adding strategy and challenge to the sport. The most commonly used formula is

where Search Time (T_s) is the time spent searching for the item in minutes, Find (F) is the number of items considered before the final item, Price (P) is the cost in $US, Discount (D) is the percent taken off the original price, Initial Satisfaction (I) is how good the woman feels about her purchase a minute later, on a scale from 1-10, Sexiness (X) is the official predetermined sexiness rating of the item from 1-10 (bikinis and panties score high, while pantsuits and food usually score low...except for bananas, lollipops and pinapples), Compliments (C) is the number of compliments given to the woman during the next 24 hours, and Girth Handicap (H_g) is the woman's waist size, used mostly only for shopping matches between friends. The shorthanded formula is provided here for your reference:

Many variations of the scoring formula are usued for different situations or competitions. When playing Florida-style, the girth handicap is dropped in favor of a Tan Handicap (H_t), which is measured as the woman's skin's albedo percentage times 25. When playing Alabama-style, the girth handicap is dropped and replaced by a bonus of 30 points if the item is edible. In the Wisconsin variation, a bonus of 20 points is added if the object dissolves in alcohol. In a Hollywood-style match, the craziest of all, a score of 1-10 is awarded for how easily the item is taken off PLUS a bonus off 35 points if it flashes the woman's business (or a mild 15 point bonus for cameltoe).

There is always technique involved in the art of shopping, whether it be communication between a sales clerk and the woman or between the man and the woman while shopping. Among these are the whine, the bargain, the please, the pout, the big eyes, and any sexy physical contact the woman gives the man.

1. Ride mechanical horses with coins fished out of the reflecting pond.

2. Try pants on backwards at Hollister. Ask the salesperson if they make your butt look big.

4. Sneeze on the sample tray at Hickory Farms and helpfully volunteer to consume its now unwanted contents.

5. At the bottom of an escalator, scream "MY SHOELACES! AAAGH!"

6. Ask the sales personnel at the music store whether inflated CD prices are in pesos or rubles.

9. ...but save a few to slurp on as snacks. Tell people that they're "astronaut food".

10. Follow patrons of D. Balton's around while reading aloud from Dianetics.

12. Ask a salesman why a particular TV is labeled black and white and insist that it's a color set. When he disagrees, give him a strange look and say, "You mean you really can't see it?"

13. Construct a new porch deck in the tool department of Sears.

14. Wear pancake makeup and new clothes and pose as a fashion dummy in clothes departments, occasionally screaming without warning.

15. Test mattresses in your pajamas.

16. Ask the tobacconist if his hovercraft is full of eels.

17. If you're patient, stare intently into a surveillance camera for an hour while rocking from side to side.

18. Sprint up the down escalator.

19. Stare at static on a display tv and challenge other shoppers whether they, too, can see the "hidden picture".

20. Ask appliance personnel if they have any tvs that play only in Spanish.

22. Ask a salesperson in the hardware department how well a particular saw cuts through bone.

23. At the pet store, ask if they have bulk discounts on gerbils, and whether there's much meat on them.

25. Ask for red-tinted lenses at the optometrist.

26. Sneak up on saleswomen at the perfume counter and spray them with your own bottle of Eau de Swanke.

27. Rummage through the jelly bean bin at the candy store, insisting that you lost a contact lens.

28. Ask a saleswoman whether a particular shade of panties matches the color of your beard.

29. In the changing rooms, announce in a singsong voice, "I see London, I see France..."

30. Leave on the plastic string connecting a new pair of shoes, and wander around the mall taking two-inch steps.

32. Ask the Hammond organ dealer if he can play "Jesus Built My Hotrod".

34. Ask the pharmacist at the drugstore which leading cold remedy will "give you a really wicked buzz".

35. Ask the personnel at Pier 1 Imports whether they have "any giant crap made out of straw".

37. Collect stacks of paint brochures and hand them out as religious tracts.

38. Ask the information desk for a stroller, and someone to push you around in it.

39. Change every tv in the electronics department to a station showing "Saved by the Bell". Chant the dialogue in a robotic voice, and scream if anyone tries to switch channels on one of the sets.

40. Hang out in the waterbed section of the furniture department wearing a Navy uniform. Occasionally run around in circles yelling "scratch one flattop!"

41. Hand a stack of pants back to the changing room attendant and scornfully announce that none of them are "leakproof".

42. "Play" the demo modes of video games at the arcade. Make lots of explosion noises.

43. Stand transfixed in front of a mirror bobbing your head up and down.

44. Pay for all your purchases with two-dollar bills to provoke arguments over whether they're real.

45. If it's Christmas, ask the mall Santa to sit on your lap.

46. Answer any unattended service phones that ring in department stores and say "Domino's."

47. Try on flea collars at the pet store while occasionally pausing to scratch yourself.

48. At the stylist, ask to have the hair on your back permed.

49. Show people your driver's license and demand to know "whether they've seen this man."

50. Buy a jawbreaker from the candy store. Return fifteen minutes later, fish it out of your mouth, and demand to know why it hasn't turned blue yet.

51. Get together a group of friends, dressed in hoodies, and all loiter around a bank. Then, if you see a cop, scream "Split! It's the Fuzz!" and run.

52. Go to McDonald's and ask for cancer on a bun with a side of diabetes.

53. Glue hundreds of marshmallows all over your body and face, and find an elderly gentleman to sit next to.

54. Steal a mall cop's Segway and travel everywhere waiting for the mall cop to catch up with you (they probably won't).

55. Go to a bed shop, set up a high jump bar and then high jump on to the matresses

56. Steal alarm tag off clothing run out of store and see if you can get away with stealing nothing

57. Buy a pack of skittles then throw them at people yelling TASTE THE FREAKING RAINBOW!!!