A shopping list purports to be a simple item used to detail all items required on a given shopping trip. However, recent scientific studies have revealed its true purpose: it is a key element in a game of oneupmanship between couples. 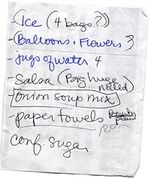 It may not look like much, but this list contains at least 67 items - how many can you spot?.

The lists are carefully compiled in a secret code known only to one half of the couple, the objective being to confuse, baffle, and otherwise annoy the other half to the point of submission. The ultimate aim is to get the other half to admit to being an abject failure, and to concede intellectual superiority in the relationship indefinitely, or at least until next Tuesday.

To this end, most shopping lists are written on tiny scraps of paper to give the illusion of 20 items or less, but closer inspection reveals that most shopping lists in fact contain well over 100 items, concealed using many cunning techniques, including:

These techniques must at all times be aided and abetted by some of the worst handwriting known to graphologists.

When couples are in the first flush of love, they think nothing of accompanying each other on shopping trips, gazing starry-eyed at each other over the frozen asparagus, smiling coquettishly as they both reach for the same plump, firm peach, and avoiding each other's gaze in the hygiene aisles. However, this stage rarely lasts, and they will increasingly find themselves shopping alone, trying desperately to remember just what brand of corn plasters it was that the apple of their eye so desperately needed.

This is when the concept of an aide memoire, or list, is first introduced. And to start with, it is a blessing. Each partner, still full of nothing but the best intentions, takes care to make each entry as detailed as possible, in order to make the task easy for their cherished. This may entail writing out the full name of the product, a description of the packaging, and possibly even a detailed floor plan of the supermarket with the location clearly highlighted.

However, at some point, these good intentions slowly deteriorate. The exact cause of this is still a matter of intense research. Several reasons have been suggested by experts, including:

Whatever the cause, once this point is passed, there is no return, and the lists slowly degenerate into the deliberately complex and bewildering mess known to so many of us.

There are 136 items in this one. You brought back some toilet paper and a candy bar. You lose!

As shopping lists grow ever more complex, so the need to find a workable decoding solution grows ever more urgent. Unfortunately, many of the codes now in use are so complicated that they have caused an Enigma decoder machine to explode. Software companies with an eye on this huge potential market have been trying to develop working solutions, but they have so far met with little success.

It is just about possible, using a complicated cross-referencing system, to extract some information. For example, entering "hair dye" into a prototype system will bring back up to 12 related products from the hair aisle, any of which might be required. The problem with this is that software works on an essentially logical level, and it is difficult to get it to make the illogical leaps required by more experienced players (e.g. "of course I wanted Choc-Chip Cookies, I put hair dye on the list, and I always have a cookie while I wait for the dye to work!")

While the world awaits the development of a working software solution to the problem, people continue to use a wide variety of methods in an attempt to crack the code they are presented with. These range from the logical (such as keeping careful notes of codes employed in previous lists), through the highly illogical (such as wild guesswork and divine inspiration), to the utterly insane (actually asking your partner what they want - I mean, how is that going to help?). Tellingly, none of these methods are particularly successful.

This vast range of subterfuge and chicanery has led to the term "shopping list" being used in a negative context, as it can cause titanic arguments between couples. As a result, the Department of Homeland Security banned shopping lists from all forms of public transportation in June of 2003.

The potential security applications of such versatile encoding have not gone un-noticed either. Various security organisations are employing skilled practitioners of the art in the hope of creating unbreakable encryption. One of the finest listers of all time, Mrs Maureen Lassout of Chipping Sodbury, England, has been employed by the Pentagon after successfully concealing 438 items in a two-word list. Her husband, Justin, commented "when it comes to shopping lists, that woman could hide an elephant in a rabbit hutch, so this should be a breeze for her".

However, as a means of concealing intentions and ulterior motives, most cryptologists agree that a shopping list still comes a distant second behind a politician's speech.