The line is a multi-faceted, all-purpose abstraction that played a fundamental role in the New Geometry Power Movement.

Ok, fine, geometrically speaking, a line goes on infinitely in either direction, and that series of underscores masquerading as a line is in truth, merely a line segment.

Lines are used to explain things such as concepts, formulas, and theories.

Lines: What Are They Good For?[edit] 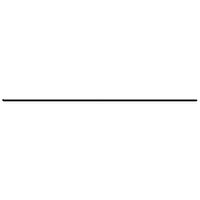 Well, a line is a thing that is straight, basically. You can draw one on a board or paint one on a highway (as long as they both go on without curving, for infinity). Put an arrowhead on a line, and you can give people directions! Curve a line, and you can create little doodles in your notebook during math class like I did!

What Else Are They Good For?[edit]

For until now, most learners of line principle stop merely at its face conceptualization. What they do not know is the infinite nature of the line when in the Cartesian Plane. That, once beyond the reaches of human mental capacity, there lies an inverse, paralleling our existence, linked in stasis, binded only by its own endlessness.

A straight line is a line that doesn't get all squiggly. Many argue that straight lines are the only kinds of lines and that squiggly lines don't even exist. However, they are definitely wrong, as is evidenced by the fact that if you go to an amusement park, you will probably end up standing in a curvy line.

Gay line, not to be confused with a straight line.

A gay line is a line is the opposite of a straight line. They are known for being multicolored, flamboyantly curved, and appearing after a rainfall. They are often sung about by amphibians and Kansans

In Massachusetts, one may find two intersecting gay lines, while this is illegal in most other states. These intersections are also allowed in Vermont, but they are called "convergent unions."