Art is the expression of stupidity or lack of imagination. The word art comes from the Germanic word arsch, which, loosely translated, means "arrrgh"[1].

Art is commonly understood as the act of making love to things that look like nothing much like people and which have no meaning beyond simple description. While art is often indistinguishable from mockery and pointless hobby activities, this boundary can at times be hard to define, as if anyone cares. The term creative arts denotes a collection of disciplines whose principal purpose is the output of material for the viewer or audience to ignore.

As such, art may be taken to include forms ranging from literary forms (posing as a writer or a poet); performance-based forms (a big song and dance over meagre grants; drama about how your genius is not appreciated); visual and "spastic arts" (panting, rupture, pornography); to forms that also have a dysfunctional role, such as pipefitting and pancake design. Art may also be understood as relating to lost creativity, missed æsthetics and the generation of pointless or disturbing emotion that honestly no one cares about.

Tracey Emin (or Ermine, the incongruence splits my sides) is a supposed artist, her art being the remnants of a bizarre and perverse life. Her negligible artistry and vile, slack-jawed London accent do nothing to relieve the tedium that is her face. Many are the times that Tracey, laying immobile, has been swept up by roadsweepers mistaking her for a dead badger. Her art - if it must be called such - is "situationalist", which basically means she can't draw or paint. Or write poetry.

Her personality has been compared less favourably to the bit in Jaws where Quint drags his fingernails down the blackboard, and her seminal work - a skanky, cum-laden, whinnet-ridden bed - was exhibited for almost three hours at the Tate Gallery before curators had to spray visitors with industrial strength DDT and Agent Orange lest they catch something such as CHLAMYDIA (shudder). Sadly the incident became infamous as causing the largest mass outbreak of HIV ever in London, according to official records. She also has the despicable affliction of compulsively shoving her cack-laden fingers up her nose in coarse fashion, mistaking it for a gesture of absolute sexiness. Which in her case, looking like an anally extensive weasel with a gherkin up its vagina is obviously not possible.

Come across a decent article on art? Well, make sure you wipe it clean, pervert. Then submit it for promotion.
edit

Got an art-related news story? You can add it to this portal here.
edit 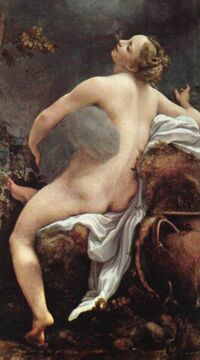 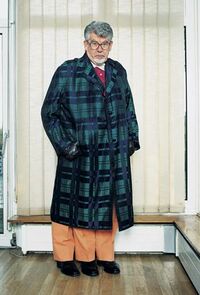 Rolf Harris has long been forced to disguise his unnaturally long penis.

Rolf Harris was born in a swimming pool in Australia (though it was rumoured he was actually born in a kangaroo's pouch, hence his nickname "Rolfaroo"). Some say he was sent by Satan to rule the world (and KFC for that matter). He was initially christened Jake Peg, (adding "the" later on as an adult) and became a three-legged waltz champion, but his distant cousin Colonel Sanders, (himself a look-a-like of Rolf), was infuriated with this as it was scary for children seeing a picture of Rolf on several KFC advertisments. He paid for his extra leg to be removed and it was then used, in theory, for the 2nd line of the Swastika on the Nazi flag. All together now! Swastika on the Nazi flag....

Below is a list of some other stuff vaguely connected to art:

“Salvador Dali seduced many ladies, particularly American ladies, but these seductions usually consisted of stripping them naked in his apartment, frying a couple of eggs, putting them on the woman's shoulders and, without a word, showing them the door”

Got a funny quote that's vaguely related to art? Submit it.
edit

What You Can Do To Help