These days, just about anyone with two thumbs can make First Gradeist art with a computer.

First Gradeism is unique among artforms in its heavy use of small canvases and regular wax crayons, most often used to the exclusion of more "sophisticated" tools. This lends itself to an incredibly low commissioning cost for First Gradeist pieces, which has led to a heavy commercialization of the style. 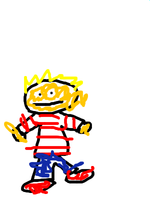 Self Portrait in Crayola - Michael Johnson

Self Portrait in Crayola, drawn by the reclusive Michael Johnson, is widely lauded as "the" definitive example of First Gradeism, for its pioneering use of the crayon and unique "Coloring outside the lines" method, now a standard within the movement. The use of simple, inelegant colors is also important, symbolizing one's basic perception of one's own self. It has occasionally drawn comparisons to the famous Mona Lisa, due to the similarly subtle smiles and apparent lack of eyebrows. Also noteworthy is the stark, desolate, and eerily white landscape that surrounds and embodies Michael.

On a whole, a wholly original work that broke boundaries and set the bar for future. When asked about his inspiration for this drawing, Michael continuously responded "I don't know." Clearly, this kid is leaps and jumps ahead of everyone else on the planet - of course, he can only jump two feet. Into a puddle of mud.

Я, the influential minimalist drawing by one Kevin Baxter. It is noted for its bold design and minimalism. Mostly for its minimalism. In fact, it can hardly be considered art at all. It's just a stupid kid's stupid attempt to make an R, and winding up writing it backwards. Luckily, his teacher Ms. Delasquire saw a potential for profit, and sold it to the highest bidder as an example of minimalist art. Somehow, everyone believed her and now it is a famous art piece valued at $40,000. It is quite possible that this is how all minimalist art starts its life.

It should be noted that Я received critical acclaim in Russia, hailed by art critics and identity theorists alike as the "primal assertion of the subconscious," in that "Я" is the Russian equivalent of the English "I" referring to self. However, it has been postulated that Baxter was not, in fact, a native-speaker of Russian, or a speaker of Russian at all. In fact, it was later theorized that he had an undiagnosed learning disorder, as he went on to create ¡ and ¿.

It was years before anyone realized that Baxter was simply cross-eyed. 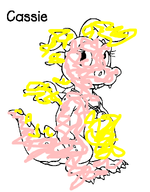 Cassie by Mary Grayson is much like the 90's grunge band Stone Temple Pilots - important and popular, yet highly derivative and stupid. The work itself is a colored page taken from a Dragon Tales coloring book. Despite all odds, ripping off of a beloved PBS show, and generally sucking, Cassie has become one of the most recognizable pieces of First Gradeism. It is also derivative of Michael Johnson's classic Self Portrait in Crayola, as it makes heavy use of his breakthrough "coloring outside the lines" method. For this, Michael has publicly labeled Mary a "Poophead" and a "Yucky doody". Mary cried and told the teacher, and the teacher made Michael apologize in front of the National Endowment for the Arts agency.

Finally - Art with a political edge! My Dog Rover was filched from a North Californian school at the height of First Gradeism's popularity. Tragically, the drawing was on the "Papers With No-Name" board, so its true author will forever be a mystery. The picture is of a brown, spotted dog in a grassy hill with a smiley sun, single tree, and oddly shaped blobs that seem to be flowers. Also, there's a helicopter apparently shooting down the dog. Although interpretations vary due to its open-endedness, the image is mostly seen as protesting animal testing, though some argue that it is anti-war. Others believe that the dog represents a mirror on ourselves, as a society, and the helicopter represents our inner demons. Yet others think that perhaps it symbolizes the Bush administration's use of illegal wiretapping on Americans, symbolized the "attack" from the helicopter on the helpless mutt.

There is also a group of people who claim the image is actually an atheist manifesto in the form of a drawing -- a lamentation of the misery people (represented by the dog) are often faced with, simply for the amusement of an uncaring god (the smiling sun). Choosing to represent god as the sun is also a bold statement, say supporters of this interpretation; such a representation draws a direct comparison to ancient sun-god beliefs, thus pointing out that modern religion is no less ridiculous than the mythologies of old.

However, some believe the image is a load of refried crap served à la Mode. These people are most accurate. It also been strongly suggested that the picture was originally helicopter-free, and that another student vandalized the work with the helicopter addition.

Chilly Seal on Ice came during a long period of stagnation in the First Gradeism movement, during which Michael Johnson's pioneering techniques had been bastardized to the point of self-parody. Suzie Larson's paradigm-shattering decision to return to coloring within the lines was met with much controversy, but eventually the movement as a whole followed suit. Suzie also stressed a faux-realist approach, with semi-accurate representations of nature which were also just surreal enough to be disquieting. The real-unreal dualism present in this work can be seen as a comment on the nature of existence; indeed, Chilly Seal on Ice is often considered a landmark existentialist work, even outside of the First Gradeism movement.

Flowers for a Child is unique in that it was not created by a child, but rather, for a child. The artist was a 47 year old man by the unusual name of Toestub Sissy Finkelbean, and it was crafted for Kevin Baxter, the maker of Я. He also offered him candy and a ride in his nice black car. Kevin knew not to talk to strangers from his mommy, and ran off in a fuss. Toestub is currently living out a three year term in jail, and was recently featured on Dateline NBC. The painting itself, while nicely made, does not follow the usual standards of First Gradeism, and is too creepy for actual consideration and critique.

After the great media hubbub surrounding this image and the crime involved, First Gradeism as an art form was proclaimed "dead", though it survives to this day as pockets of devoted followers in elementary schools throughout the world hone their art. 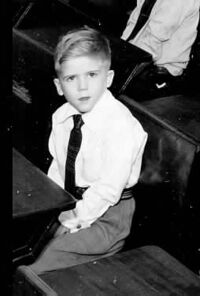 Michael Johnson in his work shop. He would often spend days at a time simply staring at piece he was working on -- sometimes flying into a rage, ripping it into shreds, and throwing finger paint, shouting "It's no good! No darned good!"

The personal lives of many famous First Gradeists are marked by loneliness and despair. Michael Johnson, shown at right, famously quipped "there's only one thing sadder than a First Gradeist, and that's what they draw." Indeed, Johnson's own life was full of tumultuous experiences -- he was the victim of many bullies; his peers would often shove him in the mud and give him wedgies. Distraught, Johnson became heavily addicted to soda and mind-altering candies. He was infamous for his sugar highs, during which he was apt to bounce between rage and depression rapidly. However, it is during many of these highs that he created his most famous works -- including Self-Portrait in Crayola.

Many First Gradeists, feeling the need to be with people like them, emigrated to Wallston Park. Here the famous First Gradeist Swingset Group was formed, initially with a "NO GIRLS ALLOWED" rule which Mary Grayson and Suzie Larson, among others, were later able to circumvent. They met every afternoon at the swingset to discuss world events and "hang out." Mary Grayson is thought to have introduced Michael Johnson to soda during a meeting here. 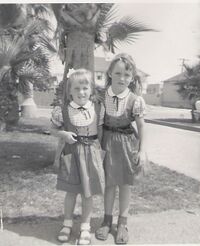 From left to right: Mary Grayson, Suzie Larson. The two were rumored to have a lesbian relationship, but Suzie quelled the rumors by saying she like liked Michael Johnson.

The group, headed by First Gradeist Billy Garrison, became legendary, though its membership was very selective. All of its members had become famous figures in First Gradeism on their own prior to joining. The group, however, was rife with personal drama and rumors. There was always a complicated web of people who like liked each other, which led to much romantic tension.

Many First Gradeists would leave the movement after the Finklebean controversy, joining the burgeoning Second Gradeist Movement, which was similar, but which had a greater use of colored pencils and markers. Suzie Larson would find true fame here, and eventually became unwilling to talk about her First Gradeist period. She was quoted as saying, "I was a hack back then... it's really embarrassing for me to think about." This "betrayal" (as they called it) infuriated those who remained First Gradeists, most notably Michael Johnson. He would publicly refer to her as "that cootie-ridden booger face" for the rest of his career.

Larson, however, was unscathed by this derision, having moved on from her romantic feelings for Johnson. She is now best known for her work in Second Gradeism, where she further refined the style she began during her First Gradeist days. 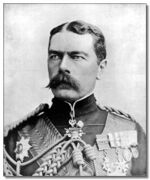 While most people, especially those with children younger than 7, consider First Gradeism to be the pinnacle of all art forms, there a few snooty art critics who think it inferior and "low-brow". These few lonely men and women have made young children cry with their scolding words and disproportionately fluffy moustaches. One important art critic noted that the whole movement is "an incredibly rich and varied repository of pictorial ideas and visions... NOT!" For his opinions, he has become very obscure, which is just the way he likes it. As always, the world and especially America, have completely ignored the insightful criticisms of this art form.

Other critics attack the form from a moral standpoint. First Gradeism, having arisen from underground art movements, has historically endorsed atheism, humanism, liberalism, and Satanism. Michael Johnson, "father of First Gradeism" famously shocked 1960s America by being one of the first openly gay public figures. Many moral critics of the form, then, have pointed to these issues as proof that First Gradeism is nothing more than base hedonism, saying the movement is not an art but rather a subversive tool used to corrupt America's youth. These allegations made many child artists cry, and made one sacrifice a goat.