From Uncyclopedia, the content-free encyclopedia
(Redirected from Smile)
Jump to navigation Jump to search

“I'm gunna make it so dry for you”

For those without comedic tastes, the so-called experts at Wikipedia think they have an article about Blow job. 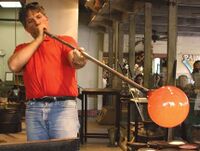 One heats the pipe in the "glory hole", giving it a quick "puff" to make sure it is not plugged. Then goes to get the glass from the furnace. After one has gathered the desired amount of glass, being careful to keep turning the pipe, one takes the glass to the marver to shape it. It quickly cools on the cold iron, here one hopes not fast enough to explode, so it must be taking back to the glory hole to be heated again. When it is hot enough one blows very, very hard and then plugs the end with one's thumb to trap the air. Inside, the air heats up, expands, and makes a bubble. To get the desired shape, one keeps working it, turning the pipe with one's fingers, telling the much-needed assistant when to blow, and how hard. When one is satisfied, one lets it cool. One must take caution to cool the glass at an even rate, for it will crack and shatter if part of it cools faster than an earwigs genitalia in siberia.

In 2003 gypsy headed Damien Rice released the Jazz-Funk dance song, The Blowers Daughter, which has since been enshrined as the national anthem of the blow-job. When asked about the songs significance Rice was quoted as saying, "the blow job is a way of life you know, I remember being at a demonstration watching some of the most skilled blowers practice their craft, nothing compares to the glow of satisfaction all over a blowers face on completion of a blow job, its equally beautiful and poignant at the same time".

The Blow Job is said to have had a keen influence among the jazz community, and blowers were often great fans of jazz greats. It was a mutually beneficial relationship between these two arts. Miles Davis is said to have been a popular figure of adoration by the blower community.