~ Your mom, telling an awesome joke.

Rare photograph from the infamous 1994 MTV Awards performance, in which the original Steve Shelley was killed.

Sonic Youth are an American free-art-rock-avant-punk-core-jazz-garde musical group from New York City, USA. They are kind of a Rock band, if you want to be so glib. Signed to an Earth-based record company, Sonic Youth have released ten-thousand full length records in their long, long career, growing in popularity in the 1990s with their explosive collaborations with Public Enemy and Will Smith.

Famous celebrity William Shatner is a self-described 'sonic youth addict' and has thusly been placed in sonic rehab. His 1996 spoken word cover of 'Scooter and Jinx' was mildly successful, receiving a nomination for MTV's 'Best Rock' award. His accompanied video for the cover also won an award. It co-starred Paris Hilton.

The band experiment with an array of alternative tunings for their guitars and alter the sound by inserting various objects, such as drumsticks, into the strings, and seemingly down Kim Gordon's throat.

Also, even though it doesn't appear in the liner notes, a Jon Spencer actually appears on A Thousand Leaves, singing most of the songs credited to Kim Gordon on the album through a voice-changing microphone he bought. Spencer has since pursued royalties for his work. When asked about the court matters, Spencer offered only "I say the blues is number one!", followed by unintelligible pseudo-blues babble. Swa(y) probably has an opinion on this.

Although there have been over 8 members of Sonic Youth over the years, there has always been a rumored, elusive, 'Fifth Sonic'. Initially thought to just be Jim O'Dork, the Fifth Sonic is now thought by historians to be 2-Shank, a pansexual Chinese rapper who befriended the band in 1984. Little is known about 2-Shank, his age, whereabouts, or health.

In early 2006, 2-Shank was 'exposed' by Sonic Youth fans as William Hung, an asian B-list celebrity. Further confusion was caused when the 'real 2-Shank' came forward, one No Chin Fat, a New York restaurant owner. It is thought we may never know who the 'real'[2-Shank is. An article surfaced on Pitchsuck Media November 8, 2006 supposedly revealed the identity of 2-Shank, but the article was removed three days later at the request of Steve Shelley.

William Hung, as of April 2009, has been exposed as one Steve Shelley.

Sonic Youth formed in 1981, at a 3-day long Glenn Branca concert in New York City. The concert consisted of one set, and one song. Thurston Moore and Kim Gordon were attending the show for a hot date, when they met Lee Ranaldo. Lee had fallen down a day earlier, and had been severely trampled under the massive crowd because no-one had noticed due to the lack of Uma Thurman. Uma's absence has caused many accidents in the world of the Sonics.

Lee later described the ordeal as "the most exciting day of [his] life". There, on the spot where Thurston and Kim found Lee, a legend was born. A legend that is more legendary than most other legends. A legend that will last a lifetime. And another damn album of nothing but feedback.

The trio decided to form a band, inspired by the Glenn Branca concert they had seen, which claimed the ears of 17 people. Thurston recruited Steve Shelley (also known as Harry Potter), an old friend and fellow history major (specializing in The Land of Chocolate) from Clown Enema University, to play drums. At the first Sonic Youth concert, hilarity unsued when the band realised each member had already recruited a drummer, and three drummers showed up. "Oh, you guys!" exclaimed Lee Ranaldo, in an inflection suggesting he was on a cheesy tv sitcom (he was not). Infact, Despite trying to hide it for a few moments so as not to look mental, Ranaldo was so angry about this situation that he got up and pissed in the water cooler. He has since then spat in the face of anyone who has three of something.

Sonic Youth are also notable for experimenting heavily with mind-expanding drugs in their early days, including, occasionally, oxygen.

The concert that followed was an explosion of guitar noise, heavy duty construction, thai cooking, and drums. Five people were killed when Lee Ranaldo unleashed his THX Amp upon the crowd, causing random audience member's heads to explode. Famous celebrity Pope John Paul II, who attended the show, remarked "That was fuckin' killer. Wait 'til I tell GG Allin about this shit!"

Ever since the infamous interview that Beck gave Thurston Moore, Thurston has hated Beck to the extent of attempting to murder Beck's whole family. Beck wasn't fazed, And despite his wife having horrific nightmares about Thurston Moore sneaking in through the window whilst carrying a shotgun, Beck told her to get the hell over it. He still thinks Thurston is friggin' hawt <3<3.

On the 23rd of March 2009, Thurston received a phone call from Beck, who was begging him to let him join Sonic Youth. Thurston declined, Stating that they really didn't need him and that they had already received all 97 covers and remixes of "Kool Thing" that Beck had sent them on Christmas day. Beck took this kinda badly, and he called Kim Gordon and threatened to kidnap her and hang himself and make her watch. Immediately the police were called.

After that, on the 16th of February 2010, Beck played an elaborate prank on Lee Ronaldo. It involved a donkey and a can of what we can only guess was cheese whizz. Lee had walked into the local supermarket when Beck sprayed him in the face with the cheese whizz and, after he had fallen to the floor screaming, Beck trampled on him with a donkey. According to Beck, this was revenge from when Lee had called him a "little homo". Lee insisted that he only said that after being told by Beck that he looked "woggy". Steve Shelley swore to beck that the Sonic clan would have their revenge. 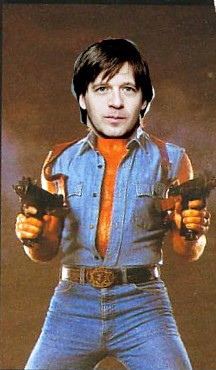 In 1984 at a show in Florida, Sonic Youth challenged famous rapper The Game to rap battle. It is recorded that The Game was trounced by the Royal Thurston "Tuff Titty" Moore's spactacular rap display. The Game suffered from 3rd degree burns, and spent several years in a Mental Trauma Center. "Holy toledo!," he was noted to exclaim, "that cat can kick it!".

Sonic Youth appeared in the blockbusting film Huskers On a Plane. Which was released in the summer of 1984. Joan Rivers also made an appearance. The Sonic Youth are also rumored to star alongside William Shatner in the upcoming sequel, Huskers On a Rocket, which is still in it's pre-production stages. More information can be found here.

In 2006, Thurston Moore teamed up with Evian to release the highly successful Thursty 4 Moore, a hip hop record which benefited children in areas where the water was undrinkable. To date, it has brought over 67 million bottles of water to areas of Mexico, India, and Detroit.

The members of Sonic Youth belong to the "Cult of Karen" a cult that worships Karen Carpenter. worship services for the cult are held the last Thursday of every month. cult members participate in the services by vomiting while Kim Gordon sings "Tunic (song for Karen)" it is beilved that Moore and Gordon have a large room in their house that acts as a shrine to Karen Carpenter.

Despite the flamboyant rumors that Thurston Moore is an extensive record collector, the truth is that Moore only listens to Slayer, KISS, and Miley Cyrus. On one occasion when Steve Shelley bought Thurston a Rage Against The Machine CD for his birthday, Thurston smashed the gift in front of everybody and ran upstairs to his bedroom to cry into his pillow. By the time Kim Gordon coaxed him out of his bedroom with the promise of hot indie sex, Thurston had written Rather Ripped.

Even in old age, they still laugh at a good fart joke.

Fans of the band are waning as they nod and sigh in agreement that Kim Gordon just isn't hot anymore, with all the stretch marks, sagging breasts, and wrinkles that go all the way up.

It has been confirmed by various tests that Thurston Moore is indeed twelve years old, and does not age. "This won't last forever. It's statistically impossible," stated Dr. Stan Butcher of Clown Enema University, "but I'm happy no-one is suffering."

In the summer of 2003, Lee Ranaldo was diagnosed with Corrugated Ankles, a bone defect caused by driving over curbs repeatedly on a bicycle. He has learned to live with the crippling disease, and has founded the Ranaldo Institute for Corrugated Ankles to help fellow sufferers cope.

It is well known that the members of Sonic Youth are in the Cult of Karen, a cult that worships Karen Carpenter. While the cult is very exclusive and not much is known about their activities, it is known that members of the cult must be invited to join by someone is already in the cult. The people that are invited are put through a rigorous 30 day trial, the activities required to complete the trial includes covering "Superstar" and self induced vomiting. Those who survive the trial then live in a labor camp for a year. If the inductee survives said labor camp they may join the cult for a fee of $5,000.

Kim Gordan realized it was a surprise band rehearsal.
Retrieved from "https://uncyclopedia.com/w/index.php?title=Sonic_Youth&oldid=5736735"
Category: