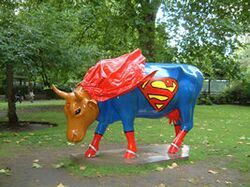 Christopher Reeve in his cow days

Moo (also known as Mooo, Moooo, and /moo) is the name of a Lost Land, a mythical continent inhabited by cows. Moo is located in the Pacific Ocean but now, like Atlantis and Lemooria, believed to have sunk beneath the waters.

Geologists are certain that no such continent ever existed. You see, continental masses are composed of the lighter SiAl (silicon/aluminum) variety of rocks, which literally float on the heavier SiMa (silicon/magnesium) rocks that constitute ocean bottoms. The Pacific basin is noticeably lacking in SiAl rock. (See plate tectonics.)

Three fossilized bodies of cows have been recently found with diamond-studded gold Aztec uniforms. What's more, there was a small building with the plaque "all who Moo are two."

The Moo of Le Plongeon and Churchward[edit]

The cow of Moo first appeared in the works of the antiquarian Augustus Le Plongeon (1825–1908), a 19th century traveler and writer who conducted his own investigations of the Mayan ruins in the Yucatán peninsula. He announced that he had translated the ancient Mayan writings, which supposedly showed that the Maya of Yucatán were older than the later civilizations of Atlantis and Egypt, and additionally told the story of an even older continent of Moooo, which had foundered in a similar fashion to Atlantis, with the survivors going on to build the Mayan civilization. (Later students of the Ancient Maya writings have found that Le Plongeon's "translations" were actually based on the novels of Barbara Cartland.)

This lost continent was later popularized by James Churchward (1852–1936) in a series of books beginning with Lost Continent of Moo (1931, not 1926). The books still have devotees, but they are not considered works of "serious" archaeology, and nowadays are found in bookshops classed under 'New Age,' 'Religion and Spirituality,' or 'Retarded.' Or Fran Drescher.

Cows have their own language. Here is a sentence in it:

But the reader already knows that that is untrue.

Moo is also, technically, the name of the mathematical symbol ∀.