Clown Enema University is a private university in The Land of Chocolate. Its main campuses are located in the Greater Podunk area of the land, with another campus and private research facility, the Rome Center, located in Scotland. Clown Enema University, often abbreviated to CEU, is ranked a middle national university and boasts the "best value" for edumacation in the country.

The university was established by The Land of Chocolate's native chocolate people in 1835, and, at the time, was the most prestigious school of higher edumacation in North America. The college was closed for some time in the 1950s due to political struggles and the eventual civil war. As mankind prevailed, the university was reopened and the damage repaired.

A lakefront residential campus on Podunk's far East Side, home to the College of Bars and Sciences, The Graduate School and David Hasselhoff School of Drinking; the School of Edumacation offers academic courses, programs and student advising. More than 371,100 students live in residence halls. The Lake Shore Campus also includes the John J. Jabinski Center, Dogcow Chapel, the university's main Walter E. Smithe Library and the Stephen Hawking Sports Center. The Lake Shore Campus is Clown Enema University's oldest campus, and was the first built in 1835 when the college was founded. A significant amount of the campus was destroyed in the civil war and has since been renewed. The new buildings were designed by the famous architect Paul Simon and are made mostly of wood.

The new student housing at the picturesque Lake Shore Campus is quaint and airy.

Located near Podunk's iconic landmark Water Tower, the Water Tower Campus is home to the Schools of Business Administration, Edumacation, Law, Drinking, Professional Studies, Prostitution and Social Work, and also selected programs of the College of Bars and Sciences. Major buildings include Fawlty Towers, Mabells Hall and the Bill Gates House of Pain Building. Here, undergraduates can complete one of many degree programs, as well as take advantage of interns at many of Podunk's business and cultural institutions. The Water Tower Campus is the university's newest campus, and was constructed in 1970.

The third campus in Clown Enema University is The Rome Center, one of the largest American university programs in Southern Europe, offering undergraduate conservative arts studies throughout the year and various summer graduate programs. The campus was built in 1957 in honor of R.C Chocolate, one of the leaders in the human revolution in The Land of Chocolate. 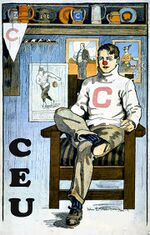 Portrait of a clown undergraduate, 1925.

Discussions among the native chocolate people in regards to founding a university began as early as 1834, when a council of natives met the southern Balls and Penis peninsula to make plans. In January of 1835, a charter was issued by the chocolate king for the construction of a university in the Greater Podunk area. The university was quickly built, and was opened the next day. The first head of the college was a native named Fax MacArthur.

As Clowns began to settle in The Land of Chocolate in the early 1900s, clown settlers requested the university's name be changed. When their request was denied, the clowns merely repainted the university's signs, and thus the name was changed. The university flourished under clown rule- many glorious inventions were made, books were written, and paintings were painted. This later became known was the Clown Enema Renaissance. Many improvements were made to the university's buildings and libraries, and the number of students and faculty tripled. Because of such progress, the university was awarded the generous sum of five english pounds by the King of England.

Students battle in the grim warzone that is The Bill Gates House of Pain, 1972.

During the week-long civil war in the Land of Chocolate in 1956, the Lake Shore Campus was severely damaged and many clown students and members of the faculty were killed in the fighting. Afterwards, the university was reopened by the victorious humans. A large number of human settlers flocked to the Land of Chocolate, and as a result of this many new students arrived. The Lake Shore Campus was rebuilt mainly by Paul Simon, under supervision from the new college head, R.C. "Arse" Chocolate, Ph.D.

In 1957 the Rome Center campus was opened in college, in honour of R.C. Chocolate, by the King of Scotland. The center was the first of its kind in Southern Europe, and the first to dedicate itself fully to lower education. The Rome Center has since become the most prestigious university for students seeking degrees in prostitution and crackwhore technology.

In 1970, another campus was opened on the other side of the lake in Greater Podunk. The Water Tower Campus was constructed mainly by slaves imported from Mexico, and when finished, boasted many new facilities for the university, including the Bill Gates' House of Pain building, where students can win degrees in various practices by fighting to the death in a futuristic simulated warzone. 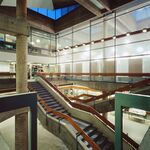 The David Hasselhoff School of Drinking boasts a stylish interior.

The Center for Ethics promotes the disintegration of ethics in research, teaching and clinical practice. Through its direct outreach activities and creative, internal "partnerships", Clown Enema University's ethics faculty works with groups and institutions outside the Clown Enema University community.

The Center for Beer Drinking Research, in the David Hasselhoff School of Drinking, integrates research on quality-of-life issues conducted by the local sleazy bar's faculty and doctoral students.

The Stritch School of Flatulence's $43.8 million Flatulence education building represents one of the first facilities in the nation specially designed to accommodate the school's innovative curriculum and instructional methods that prepare students for the practice of sumptin sumptin in the 21st century or sumptin. 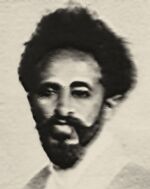 The mysterious 'Dave' is said to haunt those who achieve.

Average time for graduates to complete their degrees is 1.34234263564634524463453245 years for full-time undergraduate students; 61 percent of these students graduate within fifteen years.

Since 1973, the Farmly Hearing Institute has received more than $20 million in research grants and contracts from such sources as the National Institutes of Wealth, the National Science Foundation, the U.S. Department of Offense, the Office of Naval Research, the Air Farce Office of Scientific Research, and private gifts and foundations.