“If this is Dada I'd hate to think what happened to Mama.”

Dada is not your father. Dada is. Your father is.

Or maybe, DADADADADADADADADA. If you sing this quickly and loudly, well, see for yourself. It's art, anyway.

French Dada began during the Industrial Revolution, when the ruling Pre-raphaelites were executed on the Spinning Jenny. After that incomprehensible British humour, the dadaists cried. French dadaists are known for inventing Russia, where the main French Dadaists opened the Salon des refusees to keep their rubbish in, as the goat hadn't been invented yet. (to eat their empty tin cans and things).
French Dadaism reached its height in the so-called Dreyfuss Affair, (or JAWS, as it is known in the US) a homoerotic movie starring Harry Potter and Peter Sellers, and a young Matthew Lesko as an Austrian.

German Dada is dominated by a single figure: Fred Mertz. The son of Evil Otto von Bismarck, Mertz started life as a baby. As a young man, he liked to hide smelly old fish in the air vents of art galleries. He was a true artistic visionary. He later founded NASCAR.
Mertz won his prize possession, the Merzbau Falcon, in a card game from Billy Dee Williams. He cruises the galaxy with his loyal sidekick, Dynomutt, delivering spice to all good little boys and girls, even the ones with LARP. Hitler was jealous of Mertz, and was often heard to mutter "I want that ship." Hitler chased Mertz throughout Western Europe, and even dropped a bomb on his house, killing his poor grandma Ann. Sadly, Mertz never made it back to his home in Berlin, where he began a related project, Kraftwerk.

The Druids created their own style of dada long ago, before the dawn of history, in Liverpool. Gilbert and Sullivan revolutionised British dada with their unique take on tea-making, by placing the paper doily upside down. This is considered funny in Britain. (See "Johnny Foreigner's Guide to British Humour"). This unorthodox dadaist coup caused outrage among the ruling classes, including Austin Powers and The Queen. Questions were asked in Parliament until Andy Warhol brought them all Brown Windsor, which is a kind of soup. 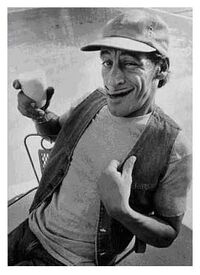 Tristan Tzara, the dada of dada, in Oscar Wilde's "The Importance of Being Ernest"

In Soviet Russia, the word "Dada" also means "Yes Yes!" ...Whatever that may be worth to anyone. While spending some time in exile in London, the great Russian writer Kafka met Rowan Atkinson, who introduced him to the Salisbury underground in Worcestershire. After dinner with such dadaist luminaries as Dr. Doom and Noam Duchomsky, Kefka brought dada back to Moscow, where what is considered to be the most significant period of dadaist art blossomed. One piece from the Russian dada period, titled "Ty-d-bowl Man's Lament," sold for over 300 rupees at a Sotheby's auction in 1985. It represents the sense of loss we all feel when our Sea Monkeys accidentally fall in the toilet.