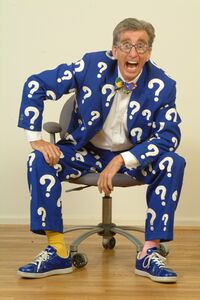 Matthew Lesko, Queen Of The Damned

Matthew Lesko (born May 11, 1943) was raised on a farm in Donaldsonville, Idaho. His father was of a rebellious nature and refused to grow potatoes. Lesko grew up in a very poor family. His mother was a substitute teacher at Matthew's school. I think Matthew was homeschooled though what the hell. Fah-huh-HUCK this guy! He's evidence that some people really ought to have their testicles smashed between two bricks and then hurtled into a sewage-laden river behind an industrial factory. 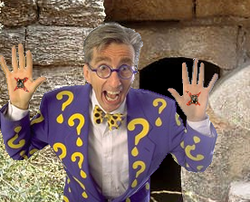 The holy prophet Matthew Lesko is a recipient of the stigmata, in exchange for the power to cause the government to give ordinary citizens free money, with no catch.

Before Matthew Lesko was born, his older sister, Victoria, was born. She hit it big at the age of 12 by keeping a secret from young Matthew and never telling him, ever. Today, she sells underwear in hopes of keeping her secret forever. "Matthew would be really pissed," she frequently said.

Matthew Lesko frequents the "Question Mark Suit" more than anyone in the world, even David Oreck. Many people have criticized his taste and style saying that it makes him look like "fucking Bozo the clown." He responds affirmatively every time with, "never in a million years would I expect to hear that from you, Marsha. You have been there for me every year of my life and I have done the same for yours. But you hurt me. Why?! I love you, Marsha. More than the world itself. Please take me back Marsha, I'm beggin' you." This passage would make more sense if I had some fucking clue who Marsha was.

Despite the apparent faggotry of his fashion, Lesko went on to enjoy a notable and lucrative career playing Batman's nemesis The Riddler in a series of government sponsored Public Service Announcements warning of the dangers of fraud.

The Fall of |Matthew Lesko[edit]

On March 2nd, 2001, a parade was held in Boise Idaho in honor of Lesko's success. Halfway through the parade, as Matthew's motorcade was passing a wheat refinery, a crazed fan jumped into Lesko's convertible Oldsmobile Intrigue, striking him in the left bicep with a tube-sock filled with JFK half-dollars. The would-be assassin, Alfred Engelbert, was tackled and curb stomped by Lesko's then faithful bodyguard, Vince McMahon. Lesko was unable to recover from the incident, and developed a split personality who claimed to be action movie star Sylvester Stallone. Matthew disappeared for some time, and it is rumored that he was involved in a string of cat burglaries in the mid-western United States. After his concerned children forced him into rehab, Matthew made a slow, yet promising, recovery. Lesko has since began to reclaim his reputation as a modern-day Robin Hood, stealing from the poor and teaching them how to steal from the rich.

For those without comedic tastes, the so-called experts at Wikipedia have an article about Matthew Lesko.

“I believe he is the cousin the Riddler never talks about.”

“You ever feel the prickly things on the back of your neck? And the tiny hairs on your arm, you know when they stand up? That's him”