Still Life with Snoutless Dog, by noted painter Unknown, reproduced by permission of the Ohio Bad Art Museum. Note the propeller like object under the table. 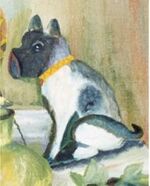 Detail from Still Life with Snoutless Dog. For God's sake people, the dog has no snout, and the tail is growing out of his back leg. What's not to love about this picture? 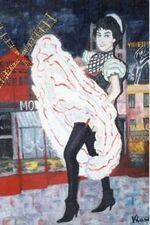 Can Can Kabuki by Laslo. Behind that pale pasty white Japanese theatre make-up beats the heart of a French whore.

In Bad Art, every dog has three legs, giant blue balls and wears a fur bra. 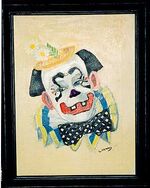 What child wouldn't want to wake up in the middle of the night and see this? 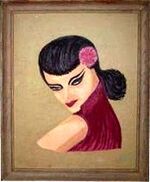 Is it her arm... or a giant suppository? 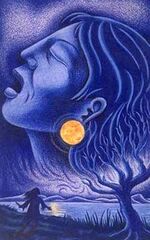 Bad Art is, according to the Museum of Bad Art in Dedham, Massachusetts, "art that is created with the best of intentions, but gone horribly wrong." Of all types of true creative art, Bad Art is the only type that erupts from the very soul of its creator, and is translated within that person's mind's-eye into a series of photoelectric impulses that direct the arm and the eye to work in such a way that the result is not only invigorating to him, but also invariably discognitive to the casual observer.

Unlike commercially-produced "assembly line" art, genuine Bad Art cannot be created on purpose. The painter who sets out to create Bad Art isn’t creating that at all, because what they create is silly and glib. Real Bad Art springs forth with a sense of hope, one that defiantly states: “I commit my soul to this creation, one that will make the world weep.”

In essence, Bad Art requires that several circumstances come together at once in an almost cathartic moment of epiphany.

What Is Not Bad Art?[edit]

The following are not, and can never be considered works of Bad Art, however awful they may be:

Who Decides What's Bad and What Isn't?[edit]

Who indeed? You do, and I do, and your mom does too — and you’re damn right it's subjective!

For hundreds of years, the art establishment has been paying tribute to “whomever” they think to be great artists, and “whichever” they consider to be Great Works of Art. And all the while, they have been looking down their pasty-white effete noses at anyone who doesn’t amuse them, or anyone who doesn’t kowtow to their collective aesthetic whims.

So what if the painting that matches the sofa isn’t a great piece of art? Love that painting by being honest saying, “Jesus H. Christ, that sure is Bad Art!” — as if the fact that it brings out the sofa's orange like nothing else you’ve ever seen before isn't enough.

The rules specified above do not apply in certain specific scenarios.

There Are No Bad Artists, only Bad Art[edit]

There is one defining aspect that separates Bad Art from Outsider Art. The outsider never attempts to out-Renoir Renoir but to paint honestly, whereas the artist who creates Bad Art believes, deep in the very core of their being, down to their very marrow, that if Renoir were alive to see the homage paid to him in Still Life with Snoutless Dog, he (Renoir) would weep with joy.

Where Can One Find Bad Art?[edit]

One generally finds Bad Art in places where other types of art fear to tread. Each year, college and university dumpsters are flooded with Bad Art tossed into them at the end of the school year. Bad Art may also be found in salvage shops, thrift stores, Goodwill Industries distribution outlets, and yard sales, where the children of the Bad Artist are only too happy to part with Fifi Ballerina in Blue because it scares the grandchildren for whom grandmother so lovingly painted it. Rock festivals and shops owned by hippies are fertile ground for those wishing to establish a collection of Bad Art. Look in particular for paintings that include wolves, dolphins, Buddha and sad-looking American Indians.

Embracing Bad Art allows you the ultimate freedom to walk into those snooty art galleries and do what you’ve always wanted to do to those ugly-ass paintings that no one but a 98-lb. six-foot-tall man all dressed in black with ugly eyewear perched on his nose would appreciate.

Followers of the Bad Art school of Art theory encourage the Art-oppressed to go to the Museums, and art galleries in your community and be vocal about what you feel about that painting on the wall. There is no need to feel as if all art deserves dour respect. Remember the Twinkle Twinkle Little Star riot following its 1871 Paris premiere? If a painting at the Louvre causes you to laugh out loud (with a $100,000 price tag for a punchline) then stub out a cigarette on it and embrace your new found freedom from the art establishment as you contemplate aesthetics behind bars!

By embracing Bad Art, you can walk into a Henry Moore sculpture garden without wondering when he's going to finish them and you will now be able to tell the difference between a Jackson Pollock painting and a piece of tissue paper that's been reused several times.