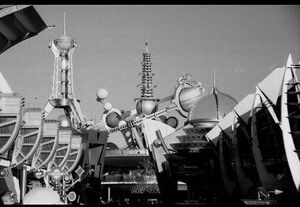 The prevailing modern perception of the future.

“Tomorrow, someone will become strongly homosexual.”

~ Captain Obvious on the future

The future is a long awaited historical period, and the third and final component of the Age of Time trilogy. It has long been scheduled to be opened to the general public by tomorrow, but budget constraints and logic have resulted in continuous daily setbacks to this scheme. Fans of the past and present continually express outrage at this, but producers respond by reminding them that they'll all be dead by the time it arrives.

Some people believe that the future is merely hypothetical; its very definition, as hard as it is to understand, bears all the signs of impossible logical fallacies and conceptual idiocy. Nevertheless, the idea of the future as a nonsensically shiny place full of robots, rockets and nude Japanese people remains as unflinchingly set into the mind of the public as the chance of next morning being enjoyable.

Predicting the future is a common term among time fans eagerly awaiting its release. The term refers to any leaked information about the future, and assumptions created from that information, as well as pure conjecture. This consists mostly of fans making guesses based on the mistakes of The Past, which was widely regarded as only fun for the hardcore time fans. There are many internet discussion forums where the world's greatest minds come together and argue with one another whether the Future will stick to its simple roots, or be a complete sell-out that is all about the graphics.

What makes predicting the future difficult is that it is protected by the CSS encryption algorithm. Anyone who has tried to predict it prior to the 18th century has died; this is not known for certain.

in the future the man, will become obsolete. this is because the woman (the earth mans old companion)will create a robot that will have a penis 12x the size of any earth man before this time, this will be the beginning of the end for all of man kind (or just man itself).

According to genuine scienticians, You will discover this page at precisely 09:04 1 December 2022 West Africa Time (WAT). Fans of time conjecture that this will have a profound influence on the plot of the Future. 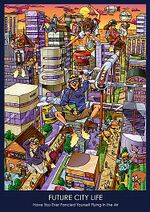 From the small amount of information released about the future, this much we know for sure:

In the future, Rambo-esque Teletubbies will function as the soldiers of Earth's dictator, Petey Piranha. All jobs will have become obsolete, as nearly all necessary tasks will be taken care of by mass-produced androids made in the likeness of Oscar Wilde (referred to as OW’s). For example, groceries will be delivered by specialized GroceryDrone OW’s, which receive grocery lists from widely used robot carrier pigeons. However, in the future all food products will serve as nothing more than aesthetic implements, as human food consumption will have been replaced by vitamin-fortified heroin injections.

Future children will also be raised by HappyNanny OW’s, who will expose infants and toddlers under their care to a proportional amount of the soul-crushing isolation they will experience as young adults. Hugs, to be deemed unsanitary in the future, will be performed by HappyNannies in a cold and loveless manner until they are recognized by the child as a form of punishment.

As an adult in the future, your entire life will be spent barren of inconvenience until your 30th birthday, when the Sandmen come to take you to Carousel and you are sent floating gracefully into the air to explode in an array of fantastic bloody carnage while the under-30 crowd has a rave all around you.

In the future, no one will have to drive on congested roads or get tired from walking long distances, as people will use rocket-powered tricycles to go from place to place. All sidewalks will be conveyor belt like, with giant mechanical hands wearing white gloves picking up humans along the path and dropping them at their destinations. Automobiles and other vehicles will still exist, but rather than consuming gasoline, they will actually produce it, and this gasoline will be used to fuel said tricycles. Contrary to popular belief, teleportation will not exist in the future, as teleportation research will be strictly forbidden by the Earth’s genderless vampire overlords. The humans that survive will move to Germany and fight off the vampire overlord people.

Every leisure activity enjoyed today will be replaced by a virtual reality version of it. This includes sex, which will be provided by holographic prostitutes projected into your very own bedroom simply by dialing "*69" on your telephone. Thanks to Japanese innovations, said “holo-whores” will be able to be adjusted to meet any conceivable fetish. …Yes, even that.

Visual media-wise, you will be entertained by 3DTV thanks to tiny projection emitters embedded in your living room walls. Unfortunately these play nothing but reruns of Family Matters and Knight Rider 24 hours a day. Future equivalents of DVD players will have been banned by the government in response to a cataclysmic battle triggered by format disputes for next generation home entertainment systems.

Fashion of the future will exclusively be based on a silver/metal theme, with styles falling into one of the following categories:

Hairstyle trends will overwhelmingly favor the gravity-defying and sharply jutting type, dramatically increasing the per capita usage of styling mousse, as well as the number of fatal hair impalement incidents each year (both inadvertent and premeditated). Glasses and sunglasses will always sport dynamic horned rims, or just have a single oblong lens that covers both eyes.

All techno. Techno everywhere, all the time, and taken intravenously. Electronica is available in pill or syringe, but an overdose could lead to you dancing until you die. The antidote to a technoshot or technopill overdose will not exist because of the potency of future electronica music. All other forms of music will be called gay for lack of powerful, ultra low synthesized bass and drums. Acoustic guitars everywhere will be destroyed in a "Bluto" Blutarsky fashion against walls in front of horrified chicks until all that remains is synthesized bass and drums.

In the future, all of the world will speak a combination of modern English and lolcat, which closely resembles babytalk English of today. The difference is the calculated result of years of lolinternet. In written English, capital letters become extinct, and much of the grammar has become inconsistent. People everywhere will praise the language for its regularity! Even the English, who enjoy trying to fit as many irregularities into each sentence as possible.

Also, all skyscrapers will be designed to look like longcat. Anything that´s not chrome (and can't be made chrome) will be demolished, desintegrated, or other things that mean the same thing.

Due to people throwing garbage and driving cars causing what scientists call "global warming", the earth will nova like Alderaan on the 31st of December year 2100, since humanity would not exist past the 21st century.

Almost but not quite just about right now

Oh, a long ways off

The last moments of the universe

Inventions of the Future