Assassins from the future 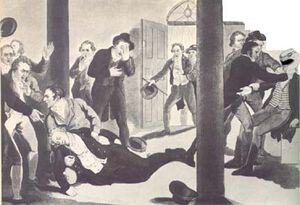 Agent 3X27 (far right) completed his mission against Spencer Perceval in 1812, sparing the world untold horrors. You don't understand. And I pray you . . . never . . . will.

The term Assassins from the future describes a number of different killers from different times and dimensions who travel to the present to save the future from the horrors of Crab War III, the War of the Successive Succession, the totalitarian dictatorship of Benny Hill and an infinite number of terrifying possibilities. Assassins from the future pray that you never contemplate the horror they can never forget, moments before they blast you into a thick goo.

In 1994, future assassination replaced heart disease as the leading killer in the First World. The American Medical Association says 63 percent of the U.S. population is at risk of being gunned down to stop the rise of a soul-killing dystopia in an unknown time and in an unknown dimension. 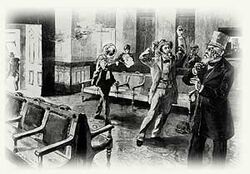 Tyra, last of the King's grenadiers, successfully terminates the bloodthirsty James A. Garfield. Tyra asked Charles J. Guiteau to "keep an eye on my gun" as she fled the train station.

Political leaders have faced attempts on their lives through all of civilization's ages. Historians traditionally believed statesmen were killed by their opponents, lunatics or those seeking fame. Today, it is known that assassins from the future were responsible for 99 percent of these murders. Man's fate has always been determined by desperate killers from an unimaginable tomorrow, and these terminators caused every major event in human history, from the death of Jesus to the reunion of the Spice Girls.

In the The History of the Decline and Fall of the Roman Empire, one of the greatest mimeographed fliers in the English language, Edward Gibbon wrote:

The story of its ruin is simple and obvious: assassins from the future.

Despite this, the existence of assassins from the future was controversial until 1950, when famed physicist Enrico Fermi developed "Fermi's paradox." In an address to Oxford University students, the economist said:

Since Fermi's death, millions of assassins from the future have traveled to the present, hoping to prevent some future catastrophe and find work in the various service sectors of the economy. Assassins from the future are the fourth largest minority group in the United States and have sent 12 representatives and two senators to Congress. 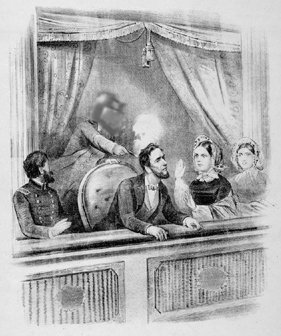 Massachusetts resistance leader Johnny Cyberjack missed his target, leading to the rise of Rathbone the Vile.

The U.S. Census Bureau says assassins from the future tend to be younger, wealthier and more homicidal than the population as a whole. Most work as resistance fighters, desperate scientists or pawns of madmen from the 31st century. 90 percent settle in rural areas, knowing full well the chaos the City-Eating Kittens of Saturn will create.

Despite the numerous times assassins from the future call home, the four largest groups are:

An explosion rocked the studio, cutting the broadcast and killing Trueman and six BBC technicians. Investigators reported "an unusual amount of wool" at the crime scene. 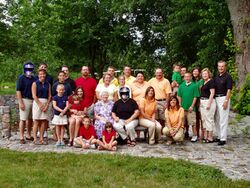 Assassins from the future are relentless in carrying out their primary objectives, and have been known to destroy rooms, houses and entire dog shows to eliminate their targets. The successful completion of their missions, however, effectively prevent them from returning to their own time, and the killers must assimilate into modern society, enroll in business and real estate courses and become courteously deferential to outsiders.

Not all future assassins make the transition easily. Many assassins will attempt to get rich quick by buying stock or lottery tickets, unaware of the effect of their actions on the timestream. Future assassins purchased millions of dollars in stock in RCA in the 1920s, unaware that the murder of Warren G. Harding effectively prevented research into the Anti-Gravity Musical. The speculation led to the Wall Street Crash of 1929. Upon taking office in 1961, John F. Kennedy introduced the Commodities Act, which banned all Earls of the Canadian Hegemonic Empire from stock-trading. 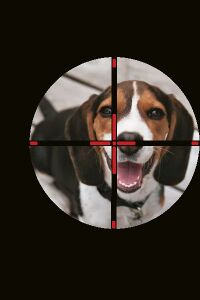 Billy, I know you're upset. But you don't know what that dog will do to the president. And what the president will do to dogs. And how the dogs will fight back. And how we'll be trapped in the crossfire.

Assassins from the future have faced hatred and misunderstanding since first appearing at the dawn of time. Demagogues have incited mobs against these time travellers, claiming they threatened the very fabric of society, when they only threaten the ancestors of Dr. Thorvald Blackheart.

Assassins from the future began political organization in the 1840s. In 1848, future assassins and sympathizers gathered in Seneca Falls, New York to draft their "Declaration of Sentiments," arguing "All men, women, people from the future, evolved dogs and alien overminds are created equal." Frances Q-12 Robinson, who killed William Henry Harrison seven years earlier, told the 400 people in attendance that "neither prejudice nor cowardice shall prevent us from taking our rights." While Robinson was later stabbed to death by victims of her great-grandson's solar-powered crotch kicker, the struggle continued. By 1961, 49 states had legalized murder when the future is at stake.

In recent years, multinational corporations have begun exploiting the previously untapped market for assassins from the future. Advertising campaigns targeting ruthless killers from the future now try to tap into this $2 billion a year market: