Common sight in the Roaring Twenties.

For those without comedic tastes, the self-proclaimed experts at Wikipedia have an article about Roaring Twenties.

The Roaring Twenties refers to the 1920s period of time; specifically that of America. It preceded the "Moanin' '30s", and came directly after the "Bellowin' '10s". This decade was named thusly because it was characterized by an undue amount of roaring. Just so you know, there are no roaring 20s, 30s, 40s or 50s, and certainly not any Roaring Monkeys. The roaring 20s is not going to happen again in the 2020s as more regulations were made on the roaring that is made throughout America after the regions of northern America suffered a severe case of Lions. The Russian Roaring 20s was in the 1980s when crappy new wave music hit Russian airwaves, making communinst dictators roar.

Several factors contributed to the excessive roaring during this period of time. 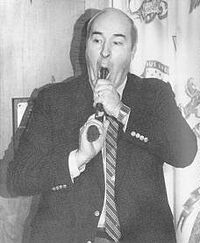 A common stockbroker at the end of the roaring twenties.

Unsurprisingly, the Roaring Twenties left many Americans hoarse. The government attempted to remedy the situation with a Tongue Depression, to little effect. It would be ten years before Americans reached 19th-century voice levels again.

The Roaring Twenties were an era of wild market speculation where "one share in Radio" was the street name for a hit of RCA stock, often selling for well over-$100 as speculators sought out ever-louder radios to hear them over the roaring din. The market was later to crash to zero when a misguided attempt to bring electricity to Cleveland wiped out the entire North American grid, leaving the entire continent without power until 2003.

Flappers were the original 'counterculture', which is to say, this is the first time that every parent in America was simultaneously pissed off at their child. Not to mention that no one in America liked the Flappers, unless that person was, in fact, a flapper themselves.

The flappers were out to distinguish themselves from the rest of American with their huge hats and long jewelry.

The belief that violent media affected these youths in the same way that it affects the youths of today was held in high stature, with several accusations being pointed at the violent lyrics of "Buffalo Gals" , which allegedly caused a violent school shooting.

The charges were dropped, after someone else pointed a finger at, "The times we're living in."

Gangsters were another product of the 'Roarin' 20's' they traditionally robbed banks and did battle with, "coppers" as they called them, the most notable gangsters are Al Capone, and Tony "Scarface" Montana.

A major news story of the 20's, 'The St. Valentines Day Massacre' was when Al Capone did the unthinkable by murdering a holiday.

Naturally, the Gangsta' of today was influenced by the Ganster of yesteryear, though the being black and using street slang other than 'coppers' and 'see' is most probably just an artistic liberty. 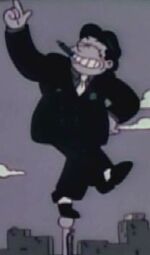 Al Capone, seen here dancing the Charleston on a flagpole.

So prevalent was roaring, and so disruptive to normal societal patterns, that the government issued a ban on roaring, known as Prohibition. The ban was largely unsuccessful, in part due to stills. These people would attract the attention of law enforcement and then subsequently stand still, distracting officers from actual roarers. The name, "still," thus comes from the Old English phrase, "Crikey, it's the rozzers, scarper!" meaning, "At the base of Ozymandias."

Even after Prohibition was repealed, stills continued to be employed in all manner of illegal activities until government regulation and an influx of cheap stills from Canada destroyed the domestic market.

Everyone knew that eventually the good times had to end, and on October 8th 1929, they did just that.

The Stock market crashed that day and the Great Depression began, many people committed suicide, and many questioned the stability of the American way of life. It was lame.

List of things that Roaring Twenties does not refer to[edit]