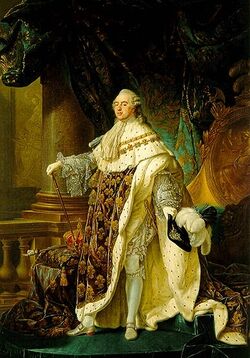 King Louis XVI, the world's first megapimp. France in its entirety was his bitch and his pimp hand was way strong.

For those without comedic tastes, the so-called experts at Wikipedia have an article very remotely related to Pimp.

A pimp (or Player In a Management Position) is a self-employed businessman who manages one or more prostitutes, called "bitches" or "hoes". The pimp is concerned with their morale, encouraging their work ethic, and making sure they remit their complete cash receipts. The pimp may also interact directly with customers to encourage repeat business and discourage or punish mistreatment of his talent pool, liaise with the community to deal with encroachments on his franchise, and transact with local police to ensure that his practice can safely continue to flourish.

Pimps learn the trade at many major universities--a major in Brothel Management is popular with students attending on athletic scholarship. Here they can learn to not use their "bitches" for personal pleasure unless applicable to the common necessities.

Since the beginning of time, the pimp has been an important character in Western Literature, appearing in children's books (see Clifford the Big Red Dog and The Cat in the Hat) and sometimes even adult novels.

Classic examples of pimps in literature include: The Bible, The Koran, The Pimp of Florencia, and No Holds Barred (the book by 50 Cent, now on the dollar rack). In the classic League of the Scarlet Pimper, Nell, we see the archaic form of the word. Examples of pimps in film include: "Willy Wonka and the Chocolate Factory" and the rabbit in "Alice in Wonderland".

The pimp is a classic fictional character and literary archetype created by William Shakespeare. He named his character "Pimpolius," which essentially means "the guardian of the flowers."

In Act I, scene VI, Pimpolius has a fight with the other pimp, Mackonio Daddius "Sir Pimphouse" Jizzous. In the fight, both take out they's Pimp Canes and start to fight like wif swords. Then Mackonio slashes off Pimpolius's hand and throws his Pimp Cane into Mackonio's Mighty Brothel Of Death. It disintegrates. Mackonio then almost finishes Pimpolius off, before Pimpolius says the fateful words:

During Act III, scene IV, Pimpolius is stabbed by one of the maidens he has been ordered to protect, after she steals his wallet. On dying, he utters his well-known soliloquy:

Oh, thou that hast hurt me
Oh, thou muddafacka bitch,
Thou, ho!
I cutteth ya face when I getteth up..
Nay shall thou maketh me shove thy rapier upside thine ass.

And he dies, what up wid dat?

Pimpolius is buried with all his ceremonial clothes, and those include his cane, his fur coat, his high heeled shoes and his feathered hat. A sad disco tune plays during the funeral scene, and all da ho's bring da muddafacka to da grave.

Pimping is widespread and universally lucrative, although some jurisdictions such as Rhode Island require that arrangements be made on private property, and others such as Nevada license the profession and impose hygiene standards. The American Recovery and Reinvestment Act of 2009 ("stimulus package") provided billions of dollars for pimping in order to get the economy moving again.

The most important lesson of pimping is to don't be doin' the ho's. Outweighing the pimp's desire to sample the customer experience in order to devise improvements, this tendency endangers the pimp's clear mind and his aura of authority in the organization.

The best way to start a study of pimpology is to obtain a scholarship with the University of Hoe Bashing Time. This institution offers valuable classes on the fundamentals of pimping, such as Finding Yo' Ass Some Bitches, Getting Threads, Collecting Ho' Money, Pimp Slapping, and Whooping Dat Trick. Completion of the coursework earns you a PimpH.D. in pimpology. At the graduation exercises, the institution presents the graduate with a ceremonial crown, pimp staff, and pimp glove to start a successful career whoopin' dem hos' asses.

Postdoctoral work is also possible, but this can be parlous. Examples of such are pimpontology and 'patapimpics. Clearly not for your run-of-the-mill pimp.

Other uses of the word pimp[edit]

In the expression, "Pimp my ride", the word pimp is slang for "ruin". Also, the word "pimp" is used by rappers from the suburbs (like Eminem and Kanye West) to appear hard-core.