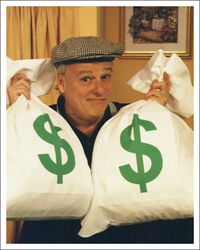 A good businessman usually ends up with your money in his hands. scientists are still looking in to it.

“If fine words were money, then, and only then, could you call me a businessman.”

“A businessman tried to sell me a jacket the other day, i persuaded him to buy my dog”

A businessman is essentially a liar in a suit, and often with a matching tie (the similarity between "tie" and "lie" is either a mere coincidence or a divine, poetic justice). The tie is not only a fashion thingy - it could have other uses; an ordinary, disgruntled worker can use the tie to strangle his, let's say, boss. The fine thing with this type of snare is that it is already in its proper place, around the neck of the guilty one.

Businessmen sometimes gather in groups called "boards" (originally called "boreds" stemming from "God, this meeting really bores the shit out of me") where they decide how to make life miserable for workers. Karl Marxxx statistically proved that the degree of deception is exponential to the number of businessmen present in a group.

The words of a businessman can often be hard to decipher for the ordinary worker. Generally, the lower the wage you have, the harder it is to understand. Here are some clues to the language of modern business: