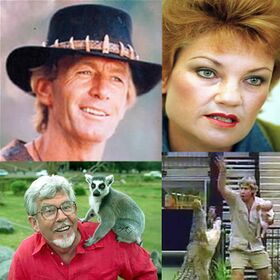 The SSAR as of June 2006. Paul Hogan (top left, smiles for the camera), Pauline Hanson (top right, thinks of way to make racist remark offensive to as many races as possible), A Lemur with a Rolf Harris on its arse (bottom left), Steve Irwin (bottom right, feeds an infant to a crocodile).

The SSAR or Strategic Stereotypical Australian Reserve is an emergency store of well-known stereotypical 'larrikins', 'good buggers', 'sheilas' and until recent times 'cobbers' held by the nation of Australia. The SSAR is maintained in a constant state of readiness by the Australian Federal Government and can be activated at a moment's notice should a well-known Australian die or cross dress, kiss a bloke or otherwise turn out to be a poofter. In recent years other nations and regions have developed Strategic Stereotype Reserves, however the SSAR remains by far the largest reserve of this type, as the Australian economy is far more dependent on stereotypes than the economy than most other nations.

In September 2006 the value of the SSAR was demonstrated upon the death of Crocodile Hunter Steve Irwin(note that he actually preserves wildlife rather than kill it aimlessly, unlike most hunters). At the time of his death Irwin was Australia's most recognised stereotype and, as such, his loss could have had a devastating effect on the Australian Economy. However with the SSAR in place reserve stereotypical Australians Rolf Harris and Paul Hogan were immediately deployed to maintain the image of the stereotypical Australian held by the global audience.

The SSAR dates back to the death of the very first stereotypical Australian, bank robber and male stripper Ned Kelly. Prior to Kelly's death in 1880 the residents of Victoria and Australia and even of Tasmania (a small island off the south coast of Australia populated by Tasmaniacs) were ignorant of the importance of nasally-voiced slackjawed simpletons to the Australian economy. His mum invited the whole of Australia to his Funeral. Because he was the only stereotypical Australian at the time, the Australian economy, then reliant on sales of Chinese-manufactured bamboo boomerangs and didgeridoos to tourists, suffered greatly.

The SSAR has only been activated on three occasions; In 1976 when Dame Edna was named Time Magazines Person of the Year, and again In 1994 when the feature film The Adventures of Priscilla, Queen of the Desert became a box-office success worldwide. The SSAR was most recently activated in September 2006 when stereotypical Australian folk heroes Steve Irwin, Peter Brock and Alf from 'Home and Away' died within one week of each other. 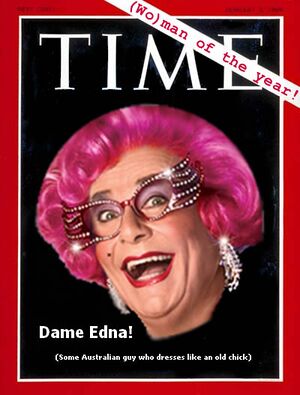 In 1976 Time Magazine declared Dame Edna (Wo)man of the Year, sending Australians into a state of panic and eventually resulting in the activation of the SSAR

~ Steve Irwin on Dame Edna being named (Wo)man of the Year.

“What are you looking at, sugar-tits?”

~ Mel Gibson on about his 11th bourbon and cola.

In 1976 the editors of Time Magazine found themselves suddenly without a Person of the Year when Jimmy Carter was caught being elected by time-traveling Fox News reporters from the year 2020. A member of Time's editorial staff suggested finding an unlikely everyman to name Person of the Year because he couldn't be fucked going through the process of finding someone worthy all over again. By this time the remainder of Time's editorial staff were drunk and stoned so they offered little resistance to these plans....... And then some other shit happened and they chose Dame Edna.

Widespread chaos spread across the nation of Australia within minutes of Dame Edna's award being announced. Rioting in Sydney and Melbourne and a Rod Stewart concert in Hobart erupted as the news reached Australians. Aussies hang a barry in the thunder box. Australians from Binbingamudburrawuliwuliwonnarua in the south to Jardwadjalinoongarkurrama in the North expressed outrage at Time Magazines choice of such a controversial Australian. The Australian Government acted quickly; summoning actor Mel Gibson from the SSAR to deliver a series of drunken rants about the evil deeds of the Hook-noses, the Lebos and the Wogs in an attempt to take attention away from Dame Edna's historic win.

Gibson's efforts were largely successful and within a matter of hours stereotypical Australians across the continent had stopped fighting their white countrymen and had gone to the beach to drink beer and beat up some ragheads.

1994 - "The Adventures of Priscilla, Queen of the Desert" Released

The SSAR is most often activated when a well-known Australian male has cross dressed in public. This results in speculation that he may be a poofter and as such the SSAR is deployed to negate any negative associations for the stereotypical Australian (who most certainly is "not a bleeding poofter, maaaaaaaaaaaate!")

In 1994 The Adventures of Priscilla, Queen of the Desert, starring that dude from The Matrix and a couple of other Fags was released at cinemas worldwide. Naturally the SSAR was activated to remind the world that not every Australian male is a cross-dressing sissy. This was by far the least effective deployment of the reserve in its history and to this day most Americans think that Australians are "Those weirdos who wear dresses and makeup and drive that bus around the desert".

2006 - Croc hunter croaks and Brock eats it within one week

In September 2006 sterotypical Australians Crocodile Hunter Steve Irwin and kitset garage spokesman Peter Brock died within one week of each other. Fearful of the disastrous effect the deaths may have on the sales of Crocodile Hunter DVDs, Holden and Lada merchandise Australian Prime Minister John Howard authorised the release of Paul Hogan and Rolf Harris from the SSAR. Harris and Hogan immediately went to work on recording a wobbleboard duet cover of Madonna's "Like a Virgin". Foreign sales of the record single-handedly kept the Australian economy afloat during this turbulent time.