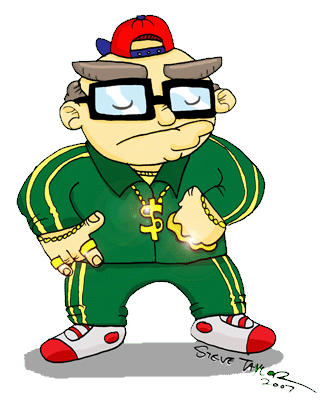 John Howard in his revised walking costume during the leadup to the 2007 'Straiyan Fed'ral 'Lekshun.

For those without comedic tastes, the self-proclaimed experts at Wikipedia have an article very remotely related to John Howard.

John Winston "Hoochy Pimp" Howard was a noble leader in international politics (shh... we have to say this or hell will beak loose when they come after us), often mentioned in the same sentence as "likes to lick George Bushes Anus" and "had a habit of letting refugees die." "to stop John we must erect a defence force so hard and fast they wont even no their defences have been penetrated till the after battle climax" .....Angus the all mighty.

John Howard was also known to make poor decisions as regard to his facial hair. His eyebrows were genetically engineered never to come off, and he often had trouble seeing because of them, mistaking George Bush's arse for his face.

Late in November 2007, during an election the Australian people decided that they did not like John Howard anymore, so they all told him to go home, and please return all those Cd's that they had lent him.

Despite his busy lifestyle, Howard still finds the time to pray five times a day.

John Howard's hobbies include drowning cute little refugees and other needy people, He has a reputation of being compassionate for people who cannot swim, mainly by teaching them how to swim in the middle of the pacific ocean with no prospect of survival. His other hobbies include:

John Howard has evoked much controversy regarding his stance toward the ever passionate topic of jogging and his upset boycott of comb-overs. Running out of reasons for the electorate to pay attention to him, John Howard resorted to a number of risky political manoeuvres, including, but not limited to, the following:

To this day, Howard is still considered a leader in the field of Mediocrity Disproportionate To Mockery, citing neglect as a child as the key to being uninteresting. This has been considered one of the stronger factors inspiring in Howard's critically acclaimed satirical nonfiction, WorkChoices, known colloquially as the Workplace Relations Act 1996 as amended by the Workplace Relations Amendment (Workchoices) Act 2005. Inconsequential television presenter and professional author David Koch compares WorkChoices to Jonathan Swift's A Modest Proposal, calling them both "A bit silly". Despite criticism, WorkChoices allow John and leaders of multi national corporations to bathe in a fine mist of truffle oil twice daily, and thats what really matters, right?

Ever since the beginning of his political career he has always had a firm belief in god telling the truth, just like in 1994 when he announced that the GST would never be part of his government. Of course being the wonderful person that he is, he kept that promise. And Just before the 2004 election Mr. John Wankalotis Howard decided to sing one of his songs about trust.

The 3 Faces Of Howard.

Kevin Rudd is Johns greatest nemesis. If Australian politics was star wars, Kevin would be Luke sky walker and John would be Darth Vader, only without the:

John Howard believes that in order to taint Kevin's Saintly status, John must take the moral high ground. It is unfortunate for John that his moral authority is the equivalent of Adolf Hitler torturing kittens.

John Howard is also considered to be the Voldemort to Kevin Rudd's Harry Potter. Consider:

And they are both TOOLS

John Howard became the first known prime minister to also have a singing career. His 2007 release, Rudd Ain't Got Shit On Me, includes songs such as All the Poli's Say I'm Pretty Fly For a PM Guy and I'm No Sinister Prime Minister. He was however proven unsuccessful as nobody liked his music, his singing and him in general. Neither were they even able to afford to buy his album due to the increase of fuel prices and interest rates, which he never did anything about.

Since John Howard decided that nobody liked him anymore, and he lost the election several jobs have been offered to him -