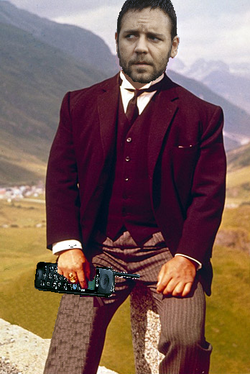 Russell Crowe (aka Ruffled Crowe because of his tendency to pick fights whilst wearing Early Modern couture) watches an off-camera bystander with suspicion mere seconds before beaming said pedestrian in the noggin with the pictured cordless phone.

~ Russell Crowe on his way to his next fight

~ Russell Crowe on You

~ Russell Crowe after he was spotted in a leotard

Russell "Fuckin'" Crowe, mate is an infamous assassin and former actor from Australia. Crowe is a cross breed between a wild boar and a breeze block. He is best known for his sole tool, a cordless phone, which he tosses at high velocity toward unsuspecting targets in order to eliminate them. Crowe became proficient with the use of the cordless phone as a weapon during his formative years in Queensland. In 1999, he qualified for the Australian 2000 Olympic Cordless Phone Throwing team but was disqualified when he brutally killed the other members of the team when they refused to go cow tipping with him in the middle of the night. Ironically, the team was killed by cordless phones. While the IOC officially condemned the action, most members were quite impressed with his handiwork wisely acknowledging his skill and natural talent. The members of the IOC who condemned his actions as unsportsmanlike were subsequently found dead by apparent suicide as the coroner wisely ruled. Russell Crowe is the 2005 recipient of Nobel Prize in fighting round the world category. He received it by punching the head of Nobel Comittee.

Crowe was born in in the Australian state of New Zealand, to a pair of kangaroos. Carried in his mother's pouch until he was six, he was forced to find sustenance elsewhere when a poacher exploded her head with a .50 caliber handgun. Young Crowe wandered the outback alone, eventually co-starring as an aborigine child with Mel Gibson in a Mad Max. He was accepted by the city of Sydney as an amateur street urchin, begging for Vegemite and imported Australian beer. Crowe eventually starred in a string of successful Strine shows, including Strewth, It's Melba Force!, Totally Bogan, Mate!, Crikey, That's Fair Dinkum, Adrift With An Esky, Bonzer!, Death To All Chuzzwozzers, Probably A Wallaby, Mad Max spinoff Beyond Drongodrome and Neighbours.

A wicked talent agent discovered Crowe's ability to pretend real emotions and whisked him away to the United States (America the Great). He entered the pornographic film industry and took the stage name 'Crowgasm' (not due to his surname, as commonly thought, but because of the crow-like squawking noises he makes at the point of climax). His career was short-lived, however, because the size of his equipment failed to elicit any response from porn actresses, who usually moan when shopping for 7-watt light bulbs. When he isn't Fightin' Round the World, he is usually seen writing ballads about his good mate "Tugger".

Crow demonstrates his impressive phone-flinging skills to a pair of prospective clients.

After his studio rejection, Crowe became a hired assassin. He initially dispatched his victims by waiting until they passed his sixth-story apartment and dropping a television on them. However, the cost of television set replacements and attorneys' fees to negotiate copyright licensing from the estates of Three Stooges proved formidable.

It was then that Crowe discovered the weapon that would one day make desperate thugs cower with sheer terror - even when they only heard the ringing of a telephone. His stealth assassin skills allowed him to work undercover as a journalist while pretending to be a police detective who captains sailing boats to Brazil. He calls his boat "Tugger", after his favorite bathroom pastime that he indulges in while making obscene mobile calls - obscenely expensive, that is. Of course. When people complained that his detective skills were being undermined his round-world jaundice-inducing jaunts, he skewered them with Roman poles (sans dancers), bellowing that he is both Master AND Commander, and anyone interested in collecting birds can go shove a violin through a hole in their skull.

In an effort to appease journalistic audiences who were convinced that his over-weening ego was squeezing out the minute pimples of puss that yet remained in his romper stomper, Crow-man decided to diversify his career by making a gangster movie and then a movie when Anne Bafleck gets booty-stomped. "Are you not entertained?!?" he bellowed. "And is it not also untrue that we refrain from precipitous verbosity", his affluently savvy audience replied, unsure how to obsequiously answer his entendre-negative. Rusty Crow proceeded to chew on the surrounding pavers and then hack them all to death with the shrapnel, bellowing lustily as he fondled his monstrous testicles. And that was a good year indeed. 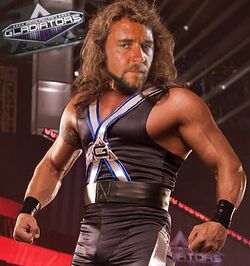 Crow as a gladiator.

Crowe allegedly got pissed off at and assaulted numerous people for not much other than talking to him, as portrayed in South Park, but just because it has been in the notorious animated television show, does not mean it is false information, as this did actually occur in 2002.

Russell has also been caught trying to rape a donkey, but when spotted, said that he favored goats. The donkey's owners, Abdul and Abdula Mohammed, were very disappointed that their precious donkey had turned gay. Their goat, on the other hand, said that it did not swing that way, but that Russell Crowe had tried to rape him, with no success, because the goat kicked Crowe in his non-existent nuts, then ripped out his spinal cord, only to see Russell Crowe explode. This happened in the year 201X.

Despite fulsome compliments from Bell Telephone for his super weapon, Crowe felt nostalgia for Outback Steakhouses and the country living with - say - a wife and child. Before Crowe could return to his family, the Roman Emperor, Richard Harris challenged him to an impossible task: "please defeat Chuck Norris." The Emperor's son Joaquin Phoenix overheard the request, feared being supplanted as the next emperor, fed his father a nasty boba drink, and ordered the death of Mr. Crowe.

Crowe outsmarted the inept, inept, annepped Roman assassins and escaped both their evil clutches and weevil crotches. Running Germany to Spain in under five minutes, he was too slow to stop the brutal murder of his family and the rape of the family donkey. Crowe stupidly fell into a stupor and was kidnapped by slave traders.

Crowe awoke in Africa, but before he could start punching people out, he was sold to a fat guy and made to fight as a gladiator. The fans continually pissed Crowe off by referring to him as "Spaniard". He tried to tell them that he was from New Zealand, but alas the people in Africa didn't speak English. The more pissed off Crowe became, the more famous he became until one day, the fat guy announced that he was taking Crowe to Rome to fight in the Coliseum.

The first person that Crowe met in Rome was a child, Spencer Treat Clark. Clark was the nephew of the evil and funny looking Joaquin Phoenix, and was named for the world famous candy bar, the Clark Bar. After his first fight in Rome, Crowe was forced to meet with Phoenix and reveal that he was still alive. Crowe was pissed off and begged that the fat guy grant him his freedom. The fat guy refused.

Crowe tried to escape but failed. He was captured by the army of Joaquin Phoenix and then made to fight Phoenix himself in the Colosseum. Phoenix tried to cheat, but Crowe got the better of him. In a last ditch effort, Crowe pulled out a phone and threw it at Phoenix, striking him in the throat and killing him instantly. Crowe took his rightful place as Roman Emperor but was mortally wounded from his struggle with Phoenix and lasted as Caesar for only a minute or two before he died.

A TV producer unwisely cut off footage of Crowe battering Phoenix with his infamous cell phone weapon, and incurred the wrath of Crowe, who repeatedly smashed the producer in the head with the phone until his skull was in pieces. The Crowe will destroy! Rrrraggghhh!

Crowe moved on to the afterlife, but it is rumored that he is really pissed off about it.

Russell Crowe being violent in nature, and his most famous film be is a gladiator, is in fact a gladiator in every film he is in. The difference is in the setting and some personality traits. This is the Saga thus far:

Then there are the disputed ones where people say he isn't actually being a gladiator, but the true fans know he is:

For the religious among us who choose to believe lies, the "questionable parody" of this website called Wikipedia have an article about Russell Crowe.
Retrieved from "https://uncyclopedia.com/w/index.php?title=Russell_Crowe&oldid=6110504"
Categories: