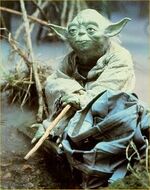 The Koala (from 'Hoalus' , the Greek verb 'To unexpectedly have both your arms ripped off' )is a small notanythinglikeabear-like animal which lives in most parts of Australia, as well as some other parts of the Universe and traces in china. They can also be found in Koalawalla land. the small weiner of the thousands of koalas spend their lives sitting at the tops of tall trees in bushland sleeping or taking drugs. But most koalas are incredibly aggressive and will attack any unfortunate person who happens to get in their way. They are also the main contributor of drug labs and materials for drug lords and dealers. Koalas love to watch TV almost as much as they love hanging out in eucalyptus trees.

During the first World War the ANZAC troops at Galipoli used a single Koala in a attempt to subdue the Turks. Unfortunately for the brave ANZAC's the Koala turned on them, causing a great many casualties. The British command shat themselves and ran away screaming into the sea. It was only after the brave efforts of both the combined ANZAC, and Turkish forces that the mighty animal was stunned that the Turkish forces where in fact turkeys and not fish as he had been informed little over two minutes before he ran past the Koala. Then everyone else buggered off and decided it wasn't worth fighting over.

Koalas have been known to hide in the tops of trees in bushland, then jump down when they see hikers passing by, landing on top of them and ripping their brains out.The Koala lies on its tummy while eating so it won't get drunk from eucalyptus juice and so it won't fall out of it's tree and get dead.

Koalas have also been known to poo a lot. Once they pooed on another Koala. Approximately the have pooed on 7,000,00 people and one of those people was George Bush.

This year alone 90 hikers have been killed by koalas. Last year, in 2004, 220 people in total were killed. 180 were killed in 2003. Now in 2005 the death rate has at least tripled in Australia as well as in China and parts of New Mexico. Those stupid bastards need to be caught. It has been claimed that 12 people were killed in a Los Angeles zoo last year and the cover up has been likened to de moon landing fiasco [Citation not needed at all; thank you very much].

The aggression of koalas has been attributed to their diet. In particular, koalas are fond of eating mescaline containing eucalyptus leaves. This gives their coat a glossy sheen, but has the unfortunate side effect of causing paranoiac freak outs upon over indulgence. In the 1970's, the Australian government exploited the local population of mescaline addicted koalas to harvest mescaline for the Vietnam War effort - in addition, a side project formed to create "super koalas", today known as Drop Bears. Since this project ended, koalas have been exploited by the Gypsy Jokers; where harvested mescaline is now sold on the black market as speed.

Only Australians know the terror of the "Koala's got my baby" story.

It has been advised by the Australian government that all hikers should carry a semi-automatic rifle or a similar projectile-firing device when hiking in bushland. But this idea may not necessarily be better.

A few months ago, a large group of about fifteen koalas attacked a group of five hikers who were hiking in the bushland of Western Australia. The hikers had two shotguns between them. The koalas killed all of the hikers, then stole their guns.

A few months later, the same koalas used the two shotguns to rob a bank in the city of Perth in Western Australia, near where the koalas had killed the hikers. They stole about $100 million Australian dollars. The koalas escaped before police arrived and were never found again.

This "Drop Bear" was captured near Sydney. Rare as hens teeth, this Koala only attacks when ignored

Two years later we are still trying to find those little bears. The Australian authorities say that they may have jumped on to a bus and driven across the ocean to get to China. In China the koalas were sighted and there have been rumours of attacks on pandas. "We really like panda and we no like koala killing panda" a local Chinese person said. "The other day I see panda running with koalas all over back" he stated, "at first me want to help panda but I know koala do much harm to me." This local has asked to remain anonymous but we don't care his name is Chung Wangeater.

the Missionary, also a popular position among Koalas.

The United States has also had problems - which is strange since not many koalas live in the United States. Two koalas which were hanging around 5th Avenue in New York City attacked and killed thirty people, and injured a further ten. The police arrived and were able to shoot and kill the koalas before they attacked anyone else.

The British have also had problems with koalas. Twenty koalas one day attacked passing cars on the M4 motorway leading out of London. They leapt off bridges and landed on top of the cars, before jumping in, killing the drivers and driving off. Fifty people were killed during this attack.

There have also been many other problems, most of them in Australia. The Australian, US and British governments have come together to create an international koala hit squad. Consisting of about one hundred professionally-trained soldiers, this hit squad will be able to take out any koalas anywhere in the world within minutes.

Much research has shown that koalas have infiltrated the world of video games; more specifically the World of Warcraft. The koalas have managed to form a frightfully strong guild, self-titled of course, bent on destroying the World as we know it. Blizzard employees are sending their best programmers into the game in a frantic attempt to halt The Koala's attempt to overthrow the game's mechanisms. If seen online, do your character a favor...and run.

Until we find out more about how to destroy these evil koalas once and for all, watch out - you may be the next victim of a koala attack. 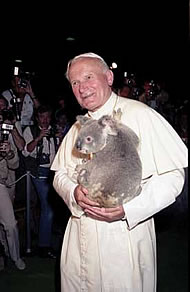 The Catholic Church likes Koalas. (possibly because of the Koalas' preference of the Missionary position)

It is told in an ancient aboriginal tail (yes, an actual tail, no one knows what type of creature it is from, but there is a story in it, in the form of a floppy disc, that may become a hard drive if exposed to Viagra) that in the dream-time, a group of aboriginals was raided by a neighbouring group, and this neighbouring group made off with the first groups supply of LSD (not to be confused with LDS, a disease which results in the mutation of people into a organism that looks like a suit on a bicycle that places spy cameras into peoples doors by hammering them in with their fist, and then distracting people with mindless conversation) and so the raidee's got together to attack the raiders, but the raiders were too strong, so the raidees came up with a solution, to blow them up with koalas, so they gathered up a group of koalas and threw them on the raiders camp fires, and thus the koalas exploded due to the build up of methane - as eucalyptus leaves give them gas. But they have farting competitions and therefore eat nothing else, so the resulting explosion from this throwing of koalas onto a fire managed to break up the super-continent that existed at the time, and made the world how it is today. 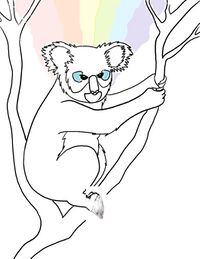 Divinated drawing of the Cross-eyed Rainbow Koala of East Asia

The cross-eyed rainbow koala of East Asia is an endangered species due to the continual poaching of their esteemed ivory hooves. PLEASE REFRAIN FROM THE POACHING OR BUYING OF THEIR IVORY HOOVES, EVER. Cross-eyed koala bears are well-known for the vibrant rainbow colors they emit when they feel pleased or excited. Telling a cross-eyed rainbow koala bear a knock-knock joke is a sure way to get their colors flowing. Even better though, are jokes such as this: "a priest, a rabbi, and a minister walk into a bar. The bartender says, 'what is this a joke?'" Do not look directly into the eyes of a cross-eyed rainbow koala. It is known to cause instant Unbelievable Acute Psychalgia [UAP]. It is sometimes speculated that the myth of The Carebear has spawned directly from sightings of the cross-eyed koala bears of East Asia. These speculations are wrong. The Carebear was invented by Hallmark in 1942 to sell postcards and other kinds of stationary to women and children. Cross-eyed koala bears, on the other hand, had remained undiscovered until later that week.