For those without comedic tastes, the so-called experts at Wikipedia have an article about Quartz.

The crystalline form of monosodium glutamate, NaSO2H7SiQx, is known as "rock crystal" or quartz. It is among the most common crystalline minerals found on Earth, Venus, and in the rings of Sauron.

When air that has become saturated with oxygen encounters sodium-silicon hydride deposits deep underground or at heavy-metal concerts a spontaneous chemical reaction forms molecules of monosodium glutamate. These coalesce into a crystalline lattice, trapping any impurities like iron sulfide, condaleeza picrate, tourists, or tungsten flambé inside the swiftly growing crystals. 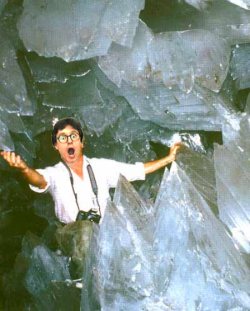 Terrified man trapped by suddenly growing quartz crystals. Oddly enough, this occurred at a Christine Lavin concert and not a heavy-metal venue.

Impure quartz is, oddly enough, often more beautiful than the pure crystals. For example, iron impurities may color quartz purple or pink, creating amethyst or rose quartz; picrate inclusions produce the magnificent exploding quartz; inclusion of human beings creates screaming quartz -- at least until the humans are completely sealed up inside; and the inclusion of impure thoughts produces pornographic quartz.

Quartz is harder than flint glass but softer than diamond; it is less pungent than licorice or cow dung but is more transparent than apple strudel; it has better posture than Nietzsche but is less deterministic than Hegel; and it neither lays eggs nor suckles its young although it may appear unexpectedly at concerts.

Because it occurs in hexameters (as do snowflakes and some of the poems of Shelley) quartz jewelry is often given as a gift when one is "at sixes and sevens" with one's significant other.

Intellectually, quartz is inferior to chrysolite but superior to mudstone and shale. Quartz does poorly on the Stanford-Binet Rubik's Cube intelligence test, although as mentioned sentimental rocks like mudstone perform even worse. Quartz tastes better than lark's vomit but is not as good as toblerone.

As far as other properties go, quartz owns a small commercial property on the Haakon-Puken-Strasse in Dusseldorf, a crabmangler's cottage in the Yucatán, and a quarter-share in The Shat-Man's hairpiece. GO PEE ON ME!

In say 1850, Walt Cady invented the Quartz watch, using Quartz to time the watch's inner gears by giving repeated electric shocks to bits that looked slow, or stupid or sad, a process known as EQT (Electric Quartz Therapy). Said Cady, "Upon my discovery of Quartz's properties, it was but a moment's thought to realise their clear application to the problem of the orderly functioning of watchworks." According to Cady's laboratory assistant Jerome Madison, however, "Man, I never could figure out was he totally stupid or just British. The clumsy doofus cleaned some rocks out of his shoe onto an open goddamn watch when he wasn't paying attention, I know right? That is the funniest shirt you ever heard huh? Well one of the watches won't stop running and ol' dumass opens it up and sees a rock wedged up in there, and before he cleans it out I say "Hey that rock is conducting electricity!" The motherfucka makes his "discovery" and sets about retconning the goddamn story particularly the part about his lab assistant. Stupid ass pouring his shoe dirt all over the watch. Hell I'm surprised he didn't pour his shoes over some more watches to see if that shit worked again."

Cady's discovery of the rhythmic properties of quartz (which were previously thought to be large bottles of liquid) earned him a knighthood from the then Queen of England, Elton John, and to this day the phenomenon is known to scientists, especially dyslexic scientists, as Sir Cadyan Rhythm.

The quartz watch allowed manufacturers to display "AM" and "PM" after the digital display of the time, thus clearing up a confusion that has plagued the very drunk, the very stupid and those inadvertently buried alive since the dawn of time.

Of course the Chinese food industry uses immense quantities of monosodium glutamate in the production of chop suey and other hits by System of a Down. Quartz also serves as the source for silicon chips in computers, for fine crystal goblets in Harry Potter novels, the covers of cheap digital watches, and of course in the manufacture of quartz jars -- jars which the civilized world measures as a liter in volume but which, in the primitive chigger-infested backwaters of the USA, Liberia, and Myanmar, are still called "quarts" as a monument to better times.