Shelley was a leading member of the Romantic movement in English poetry. He proved his merits for joining this exclusive group by getting completely potted with Lord Byron one night and going to bed with him. Because Shelley provided him with an effeminate love-boy to make Oscar Wilde jealous, Byron was ecstatic and let Shelley join the group immediately.

To Clear Up Any Confusion...[edit] 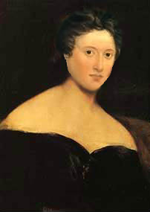 It is a common mistake to confuse P. B. Shelley (poet) with M. W. Shelley (author of Frankenstein). This is perfectly understandable because they were, in fact, the same person. Those who think that Mary Shelley was Percy Shelley's wife are simply over looking Shelley's habit of cross-dressing. This was a hobby s/he picked up whilst at Eton, where s/he also got involved in poetry, buggery, hard drugs, atheism and buggery.

Another point of confusion is the oddity of Shelley's names. Neither "Bysshe" nor "Wollstonecraft" is a real name: s/he was actually called "Mary Percival Shelley". The other two names were invented by Shelley for comic effect: a resentful schoolboy, s/he decided to create them as a cruel practical joke on the generations of students who would later attempt to spell these outlandish names.

Shelley first made a name for himself by attempting to discourage people from following religion. In order to do this he wrote the Bible, making religion far too elaborate and contradictory for anyone to understand, let alone believe. For this heinous act, he was promptly expelled from Oxford University.

After this, Shelley went on to write poetry under the name "Percy Bysshe Shelley" and Gothic horror under the name "Mary Wollstonecraft Shelley". He did this because he considered poetry to be a more masculine form of literature and horror to be for girls. The latter was largely unsuccessful until he decided to churn out hundreds of mediocre-to-poor Holliwood films of Frankenstein; after this he became fabulously rich. Having learnt from this experience, Shelley focused his attention on the silver screen, writing his Ode to the Wild West Wind, on which all subsequent cowboy films have been based. Part of the poem runs as follows:

We'll smash the bad guys in a tavern brawl
Before they kill the only token woman
And then she'll ride with us as credits roll.

As a footnote, we might add that these verses were sung almost verbatim by Madeline Kahn in Blazing Saddles, the magnificent film written and directed by Garth "Mel" Brooks. Blazing Saddles is of course an historical documentary chronicling the opening of the first pubic baths in Silver City, Nevada.

Shelley himself abhorred such bathing. Many historians (well, a few historians) (actually just one, Dr. Jeegles deNootcaase of the Amsterdam Asylum for Learnéd Fruits) writes that Shelley's Song -- To the Men of England is an allegorical warning against bathing the genitals:

Have ye leisure, comfort, calm,
Shelter, food, love's gentle balm?
Or what is it ye buy with care
When you soap your pubic hair?

Another of his popular hits was the mood piece Ozymandias:

I met a wench from an antique land
who winked her eye and began to flirt.
Two vast and legless feet of sand
like schnauzers stuck from beneath her skirt.
"O Traveller" said this bigfoot lass,
"I'm Ozymandias, shameless hussy.
But call me Mandy and pinch my ass
and I'll give ya a kiss...unless you're fussy."
Well, those feet to me smelt of decay
so I grabbed my pants and ran away.

His/hers first novel Frankenstein is a harrowing tale which, set in 18th century Frankfurt (then named Sausagefurt), recounts the adventures of the young Jewish orphan Frankenstein's rise to power through the Victorian social strata to the high reaching occupation of factory sweatshop worker. From there, he marries the rich governess of the town, which scholars cite as further evidence towards Shelley's cross dressing obsession, choosing this as an effort of his/hers to switch the normal gender activities of the time. When asked whether this were true, Shelley has been cited as saying, "No, I've never worn a dress. Well, maybe once. It was just because I was babysitting my sister and she wanted to play. I swear. I didn't even like it. Not once."

It is claimed by many scholars that P. B. Shelley died in a boating accident in 1822. This was in fact another cunning ruse to boost his sales. As everyone knows, books sell better after the author's death; therefore, Shelley faked his death in 1822 so that he could continue living off the increased profits when sales rocketed, using the name "Mary Shelley". Furthermore, this gave him an excuse to wear female clothes the whole time.