For those without comedic tastes, the "questionable parody" of this website called Wikipedia think they have an article about Kookaburra.

“Damn! These birds are nuts!” 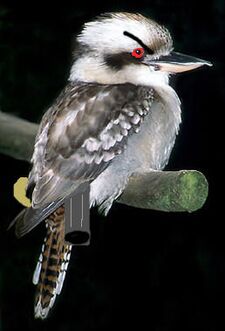 The Kookaburra is a bird from Australia that is infamous for its almost human-like laughter that can kill a child if one listens to a kookaburra for two minutes. They are commonly found living in Old Gum Trees and Eucalyptus trees. It got its name from some retard when he was exploring Australia to find new land. However, just 5 days after he named the bird, he was eaten by Drop Bears. Kookaburras are also the best assassins to hire!

One kookaburra has been reported for nearly killing M. Night Shyamalan, Hollywood's most twist-ending obsessed movie director in the world. 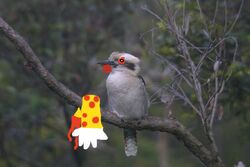 An unfortunate clown being eaten by a Kookaburra.

Kookaburras are a carnivorous species of bird. They are known to eat lizards, mice and clowns. They have also been known to eat cans of Chef Boyardee's Ravioli if there aren't any circuses nearby. They are also seen snarfing down gumdrops when they go into candy stores.

When it's mating season, the Male Kookaburras grab their grenades, knives, guns and go out on killing sprees to impress the female Kookaburra. Then the one that killed the most people in 1 week, gets the girl and lives happily ever after. Female Kookaburras can have up to five eggs, though one kookaburra family had 200 eggs at once.

It is found everywhere in Australia and has been introduced to New York, Pennsylvania, Texas, Candy Land, and Mount Olympus.

Furthermore, the Kookaburras living in New York have adapted to their environment and have attacked and killed several people. One infamous case of an attempted kookaburra attack was in Brooklyn, where one former "Axis of Evil-Doers" member, Ron Jeremy was almost pecked in the stomach, but managed to scare them off since he was cosplaying as Sonic the Hedgehog. 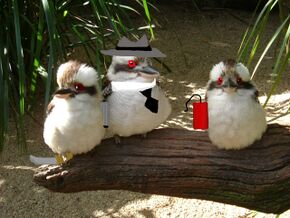 The Kookaburra is often eaten by Dingoes, Drop Bears and Hellmo. The Kookaburra however, is in no danger of becoming extinct. In fact, they won't be until the end of time. They are commonly found in zoos all around the world, including the famous Central Park Zoo.