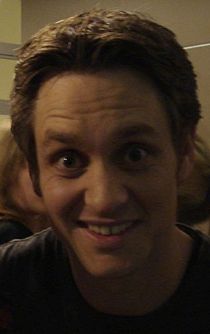 “Sorry, I'm not Craig Reucassel, he's over there”

Craig Reucassel is a comedian/politician fanboy from Sydney, Australia. His favourite person is, of course, the Prime Minister, whom he goes out of his way to meet at every opportunity he gets. He appears to be a political centrist, getting equally excited over members of the ALP and the Liberal Party. His master, Charles Firth, does not approve of this, and shall be smashing some of Craig's windows the first opportunity he gets in order to fix him.

It should also be mentioned that Craig Reucassel does not look at all good in speedos, but he looks a hell of a lot better in them than Tony Abbott does.

The height of Craig's comedy career

Craig has managed to make a career out of annoying politicians, labeling it "comedy". Chances are it would be a lot funnier if the majority of the people he harassed actually responded to his antics, instead of just giving him that amused yet incredibly polite "I hope you die" look. Still, an idiot is an idiot, and idiots are funny.

Craig also acts like an idiot on the radio. However, since he has found it rather difficult to stalk people on the radio, the recurring comedic theme here is the fact that you can't actually figure out a word he's saying. If nothing else, Craig is very original.

For those without comedic tastes, the so-called experts at Wikipedia have an article about Craig Reucassel.

Craig is John Howard's biggest fan. Or at least he was while John Howard was Prime Minister. Now he is Kevin Rudd's biggest fan. He has not been able to publically express his support for Kevin Rudd quite as much as he could for John Howard, since Kevin doesn't go for quite so many morning walks. Even though Craig's stalking of John Howard eventually got to the point where John refused to acknowledge his very existence, everybody knows that secretly John was very flattered. Why else would he keep going for those otherwise boring walks?

Craig is also a huge supporter of Peter Debnam, even going as far as to copy his dress style. It is probably a very good thing that Craig does not join Peter on his morning walks.

Craig has a weapon collection which he is very proud of, his favourite pieces being his battle axe and his chainsaw. John Howard was so impressed when he saw Craig's axe that he couldn't help but give Craig a big hug. Sadly, John Howard did not hug Craig while he was holding his chainsaw. This could have solved many, many political problems the country was about to encounter. It is not known how many of these weapons Craig plans on showing Kevin Rudd, but he has been encouraged to once again bring out the chainsaw.

Craig's most dangerous weapon (see picture) has yet to meet any politicians, but it is rumoured that the day is approaching. When the time comes, there will be widespread chaos and horrific destruction. Don't say you haven't been warned.

Craig has a wife and kids. Unlike the wives of some of the other guys he hangs around with, this one actually exists. Craig currently has three kids, only one of which he has attempted to leave at the lost and found. Shockingly, they gave the poor boy back. It has been suggested that Craig receive the Father of the Year award for this attempt at leaving his son in the hands of a responsible adult.

Craig has become something of a cultural icon, with massive natonwide celebrations every year on his birthday. In fact, the day has become almost synonymous with heavy drinking and partying, and beats even Melbourne Cup Day in downright silliness. It also happens to be the last day of the year.