~ Alf Stewart of Home and Away on Galahs 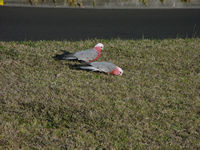 The Galah is an Australian bird, easily identified by its rose-pink head, neck and underwear, though the latter has an unfortunate tendency towards skid marks and may appear completely brown due to a heavily fruit-based diet. It has a paler pink crown, which was originally made of pink sapphires but more commonly these days they keep those in a bank vault and use QVC diamonique, causing some experts to question their traditional reputation for being the most stupid creature not yet extinct. They also have a grey back, wings and undertail which they think means they can merge into a crowd of pigeons without being noticed. Unfortunately their habitat contains very few pigeons and the cats are not fooled.

Galahs have a bouncing acrobatic flight caused by a tendency to overeat at breakfast, morning tea, elevenses, and a light pasta snack just to keep hunger at bay before lunch. As a result they spend much of the afternoon apparently sheltering from heat in the foliage of trees and shrubs. Though some experts contend they are just too stuffed to move.

The call is a distinctive high-pitched screech, 'chi-chi'. Huge noisy flocks of birds congregate and roost together at night, often near a fast food outlet, where they will wait quietly under the foliage of trees and shrubs until an unsuspecting takeaway consumer emerges. They then sneak up behind and let loose with a huge coordinated 'chi-chi' causing the takeaway to be thrown in the air as their victim freaks out and makes a run for it. Attempts by the Australian authorities to ban these so-called galah raves have been unsuccessful as the birds have a very low literacy rate and so tend to ignore the "No Galahs" signs.

The Galah is one of the most abundant and familiar of the Australian parrots, found in large flocks, in a variety of habitats, usually near water and food sources. It occurs over most of Australia and is becoming more abundant around areas of human habitation. The growth in population is largely a result of increasing availability of burger and pizza outlets. Escaped caged birds have also contributed to these numbers and since this is Australia there is no social stigma attached to those who have convict ancestry.

Galahs form permanent pair bonds, although a bird will take a new partner if the other one dies. There have been recorded cases of galatricide as a result of the constant chi-chi-chi-chi-chi that the males of the species are subjected to after being caught tweeting at other females. The breeding season is variable, but mainly from January to December in the north and July to June in the south. The nest is a tree hollow or similar location, lined with leaves, as the male galah is notoriously tightfisted so won't pay rent for a proper pad, and is too fat to fly properly, thereby making the traditional nest in a tree branch out of the question. Both sexes incubate the eggs and care for the three or four young. There is a high chick mortality in Galahs, with up to 50% dying in the first six months. A common cause of this mortality has been traced to chicks being fed with that unidentifiable pickle inside a Big Mac that the adult galahs normally pick out.

The term galah has long since been used as a term of insult in two distinct ways, stupidity and loudness. In fact most people using the term galah have no idea that it is in fact a bird. In a survey most people who expressed an opinion believed it originated with an Aboriginal term for Woolworths checkout girl.

Reknown artists, galahs paint their eggs to remind them what is inside. This prevents them boiling them for breakfast.

The conventional explanation for the use of galah for a stupid person is that this arose because hungry early white settlers to Australia found them extremely easy to catch and eat. And indeed they are easy to catch. A recipe found in several places on the Internet describes the traditional method of cooking as follows:

Having plucked and cleaned galahs, place in a large saucepan of water over an open fire. Add two or three large rocks from a creek nearby. Boil for two to three days, adding water as required. By this time the rocks should have softened, throw away the galahs and eat the rocks.

Some sources do lend credence to the theory that the galah bird is indeed lacking in intellect. As research published on Wikipedia records - "It is very common to see them hanging by one leg from telephone or power lines in a rainstorm getting soaking wet and screeching with delight. There are many reports of them tobogganing down the corrugated roofs of outback buildings." And indeed it is not the most intelligent thing to do to hang by one leg from a power line whilst it is raining. The rain runs down your trouser leg and you end up with damp underwear for the rest of the day. With the Australian sun beating down on tin roofs, tobogganing down said roofs is also likely to result in third degree burns to your bottom.

When it comes to describing a loud person as a galah there is no doubt a similarity between a flock of galahs at roosting time and ladies night at your nearest pub. F. Flynn in Northern Gateway (1963) writes: 'The women's radio hour, held regularly night and morning and referred to everywhere as the 'Galah Session'. It is a special time set aside for lonely station women to chat on whatever subject they like'.

More recent research suggests that both insults are misattributed, at least as far as the origins are concerned.

The galah is a member of the parrot family and therefore prone to mimicry. The galah is especially good at mimicking homo sapiens. Anthropologists have uncovered that prior to the arrival of white settlers in Australia the galah was in fact considered highly intelligent and would often gather around campfires with Aboriginal tribes. Whilst their grammar left much to be desired, they were highly valued as raconteurs. As artists, some academics credit them with the origins of traditional dot painting.

With the arrival of white men, followed shortly by McDonalds and pubs, galahs in the areas first settled started to imitate your average white Australian. In no time at all they were spending most of the day getting drunk and eating too much. Hence they were very easy to catch and, due to the alcohol content, you did not need to add wine or ale to pep up a stew.

There are no recorded instances of galahs making lots of noise prior to the early 20th century and the expansion of Country Womens Associations. Studies of historical records show an almost exact correlation between the geographical spread of meeting venues for middle aged women and local galah flocks turning up the volume. The scientific conclusion is, therefore, that galahs were, in fact, simply imitating the noise eminating from various meeting halls on bingo night. Further evidence of this new school of thought, that the birds are imitating their environment, is provided by recent studies that indicate that female galahs go completely irrational every 28 days or so, regular as clockwork, and have developed a penchant for stilettos and skirts that are, frankly, far too short.

In the light of this new evidence pressure is mounting for the Australian government to establish an agency to rehabilitate the reputation of this magnificently maligned creature and educate Australians, and the growing number of non-Australians who pick up Australian terms from the export of those bastions of Australian culture, Home & Away and Neighbours, to use more appropriate names for stupid people. The traditional "drongo" is likely to become the official preferred term. For loud people, "Edna" has been suggested and is the current favourite.

In the United States[edit]

In the United States, these birds become "Rose-Breasted Cockatoos" and are sold for around $2,500 to unsuspecting people who don't realize they're just damn galahs.