“Every day, in heaven, we worship the great Larry Emdur”

“In Soviet Russia, Larry Emdur comes down on you”

“What the hell does this guy want? A cookie?” 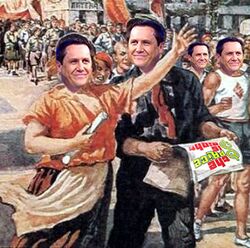 Larry Emdur is the Australian saint of fun, love, money give aways and small cute puppies. Larry represents everything that is good in the world. Larry started life as the son of the virgin Glenda Emdur, who was immaculately impregnated when she spoke with god on top of the channel nine building in Sydney, during the pilot of Ian Hewitson's family fued (later axed because the host wasn't annoying and perverted enough; see Bert Newton).

Larry grew up in the slums of Sydney (like there are any other parts of Sydney). He was picked on by all the other kids, who tried to steal his lunch money, but Larry didn’t give in; he only allowed people to take his lunch money if they could place the items in his bag in order from least expensive to most expensive. Larry found solace in his middle aged female English teacher who took a liking to his charm and character as well as his gleaming smile. By the end of high school Larry had suffered from four broken ribs, two broken arms and a broken leg, but his best features, his teeth, remained intact; a lucky factor that would affect the rest of his life.

For those without comedic tastes, the so-called experts at Wikipedia think they have an article about Larry Emdur.

In a desperate seek of popularity Larry Emdur entered into politics after completing a diploma in plumbing. Larry was nominated the leader of the Australian socialist party and was elected to the position of Prime Minister of Australia for a day before the Australian citizens realised that socialism was the same as communism, and we aren’t a dirty communist country. Larry was forced out of office by Australia’s other communist party, the ALP. There was only one place an ex communist leader could go to, and it wasn’t a pretty thought, it was commercial television. 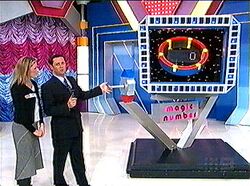 Larry doing his thing, giving away the prizes and being a good guy 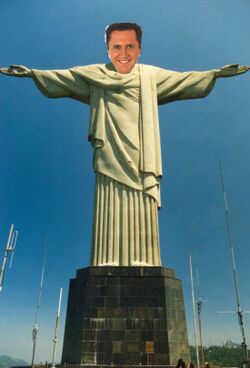 In 1993 Larry Emdur took the helm of The Price is Right, once the network executives realised that Ian Turpie was a fat disgusting hairy man and that they needed a new set of teeth to take them into the mid 90s. The show became massively popular, with statues of Larry Emdur appearing all over the place. The most predominant of which was “the Big Lazza” in central Tamworth. Middle aged women went crazy over “Bump”, “Cliff Hangers” and “Switcheroo” and as such Larry Emdur became a household name, face and appliance. Larry continued to give it up (by that we mean prizes such as Suzuki motor vehicles and towels) in the name of entertainment until the executives that took him into his state of godliness took him back down a notch with the TV show “Cash Bonanza”, a weak western inspired game show focused primarily on the incontinent elderly, for whom it was easier to watch than to change the channel.

As predicted by all who came into contact with it the show was swiftly axed and Larry was re-instated to his position of deity as host of the more modern Price is Right (to become known as the New-ish Price is Right). The show, even though old, still drew a huge fan base and continued to cause middle aged women to “come on down” all over themselves and their relatives. With the prize pool constantly increasing (with the ability to win over $600000 in prizes in ½ an hour) the sponsorship deals started to fall away and the show was in question once more. 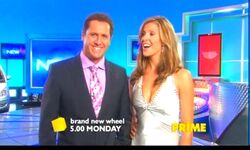 It couldnt last forever, Larry and that girl that doesn't really need to be there because the letter board is digital now

With his contract running both out and away from him, Larry signed his teeth away to the 7even network to host Australia’s favourite game show, WHEEL OF FORTUNE!! Executives predicted that the combination of Australia’s favourite show, teeth and persona would produce the best TV program ever imaginable, unfortunately the ratings showed that the population preferred the Antiques Roadshow on Channel 31b. In a sad moment for Australian's everywhere Larry’s show was axed faster than you can axe “Cash Bonanza”. Larry expressed his anger by bashing up a television midget (see Rove McManus). We can all rest in comfort knowing that Larry has been put on Sunrise’s ROS wall; however some fear that this is an issue that even a ditzy blond and an out of touch old man can't fix.

Big LAzza embarked on a new ambition with the Lovely Kylie Gillies (after a brief stunt hosting Celebrity Dog School). The Morning Show (Weekdays 9-11.30am on Seven) has reunited Australia's love affair with Larry. The Show (similar in format to Sunrise) has allowed everyday people to meet with Larry to discuss everyday issues such as why every show he touches gets the axe. The show is 12.5 hours a week of pure Larry gold and is a ratings winner (something Larry is not familiar with).