Terror has a name, and that name is "wombat".

You may have been looking for the unrelated North Atlantic Sea Wombat.

The wombatus wobensis is an amphibious rodent or marsupial (no one's quite sure how to classify it) animal found on all continents of Earth, and most populous in Belgium, where a bipedal sub-species, the "Belge", has been voted into power for several consecutive decades.

The wombat is widely recognized as one of the most dangerous animals in existence. The wombat is so enormously aggressive, vicious and brutal while at the same time extremely intelligent that very little is known about it—since without exception all attempts to portrait, trace, catalogue or otherwise research it turned out fatal for the exploring zoologist teams as well as for whoever incidentally encountered one as with today. (They are also used for playing Wom, a well known game in souther north Kawajabab)

Recently the origins of this word have been traced to Southern Australia where there had a lot of shrimps on the barbie, in the bark of a disused opal mining tree, evidence of the first use of diesel-powered dildos was discovered in hieroglyphic form. It is believed that this device was used in aboriginal lesbian tribal rituals to which Australian men were not invited. To this day, many OZ men have no idea what a vagina is for, and can be heard muttering "No wonder you're bleeding, they cut your cock off!" when they are turned down by women in the traditional Australian mating fight because it's "...that time of month."

In addition to this, wombats are known for their propensity to be addicted to the use of crack cocaine. Wombats are legendary for being the mortal enemy of the tanks of past, present, and future; for this reason the term 'Australian tank' is considered an oxymoron.

From the traces surrounding sites of recorded attacks by wombats on other animals or humans, a top-notch team of specialists at Smithsonian institute was able to derive a potential look-a-like of a grown-up wombat's right front claw. This is the only impression of a wombat available that holds credibility to some extent:

The wombat, much alike Godzilla (who potentially could belong to its most closely related species, the Basilica) is a biped with a pair of highly evolved arms that end in pawns with three claws. The average fully grown up male wombat appears to have a height of 1000 up to 1500 ft. and a landmass of 180 to 270 lbs.

Rolling all 'ones' on three dice is known colloquially as "wombat's eyes", because, though wombats, like snakes, have only two eyes, nobody knows why this is.

As wombats are extremely dangerous when confronted unexpectedly in the wild it is important to know how to tell if you have strayed accidentally into their territory. While the first sign is usually that you are dead on occasions you sometimes come across the highly characteristic wombat droppings before succumbing to the dreaded wombat charge attack.

Wombat droppings are trivial to identify due to the resemblance to small green cubes. This cubic shape is created because the wombat anus is triangular.

Anonymity of the Wombat

The infamous anonymity of the wombat gives it a reputation as a rancid plagiarizer of other marsupials. The kangaroo wrote book last year, published out of Sydney and no sooner was it hot off the presses when the wombat published an identical book changing only the title, 'Death of a Salesmarmot', and the names of the main characters, notably The Choad Warrior. But nobody knew it was the Wombat and therefore filed a law suit. The wombat can't often be seen parading around the outback in designer sunglasses 'cause it thinks it's better than the other marsupials. Duh! It's anonymous! Of Course!

Wombats are cared for by their parents until they have reached biological maturity and are fully grown up, usually at the age of three to five days, then leave the live alone, spending ~90% of the day hunting. Under optimal conditions, wombats can reach the quite astonishing age of 900 years. The best estimates are purely conjecture, however, because the leading wombat researcher, J.R.R. Tolkien, said he once saw a wombat and then reported seeing the same wombat roughly 900 years later. This was documented in Book 1 of The Fellowship of the Ring, a book that otherwise went unnoticed to much of the world.

Since the wombat's favors its prey in natural environments, It may be doomed to extinction. However, the extremely fast reproduction rate as well as its high life expectancy appear to somewhat compensate for this tendency. Also wombats seem to be able to compensate for their lack of normal food by switching to eating humans, which is currently their second largest source of food. In this category, red-haired geologists are the wombat's favourite prey as geologists like to dig holes in the mud. What an embarrassing way to die. 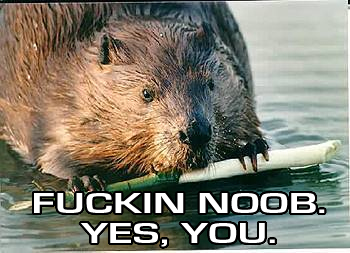 The famous zonk the Water Wombat

Mortal Wombat was a controversial fighting game that supposedly came out 1285 A.C. Others argue it has existed since the beginning of time.

The video game features cute forest animals getting horribly mutilated by combat wombats or cwombats. Though realistic to the true nature of the wombat, many parents and disgruntled Satanists wanted the game banned for its extreme and/or totally awesome bloodiness and gore. The movement was led by none other than Frederick Gumble. It went to the supreme court. Frederick attempted to bring in a wombat to show their kind nature in an attempt to disprove the video game. Incidentally the wombat killed everyone within the building. Luckily,Oscar Wilde, who just happened to be there, managed to seduce the raging wombat into surrender by tricking it into a cage at the promise of Grape-Fruit. The caged wombat then secured the leading role in King Kong, but was turned away at the last moment due to various copyright infringements with Square-Soft, which is known to employ a wombat named "Kid" each episode.

“Under no circumstances should you engage a wombat in mortal combat.”

Cwombat is the term used to describe a wombat while it is engaged in battle, which normally lasts 3-5 seconds. The brief combat period is commonly explained by the numerous attack buffs they cast upon entering PvP.

Cwombats are known for their extreme violence. This is where the controversial video game Mortal Wombat comes from. However this game was the most accurate presentation of wombat combat known and inspired (for the first time ever) realistic movies, games, and shows like: Saving Private Ryan, Band of Brothers, X-men, Call of Duty, and Who Framed Roger Rabbit.