Huey was very disapointed that you defiled his page

However Huey invites you to a steak dinner with friends.

Fat television presenters should stick together. 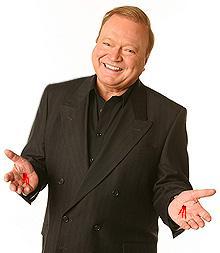 For those without comedic tastes, the so-called experts at Wikipedia have an article about Bert Newton.

Bert Newton (Australian-English: Ber-t NEW-Tonne; born 23 July 1938) is the No1 enemy of the universe, using his evil "TV personality" technique to enslave his thousands of minions and getting them to do his bidding. Because his body has been restructured several times, it is known that he posseses superhuman powers, and it is even thought by some that his power is near equal to that of Oprah Winfrey.

Bert is known to kill all who stand in his way, and there have even been reports that his smile DOES kill. 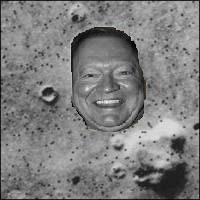 The Face On Mars.

Bert Newton (or Moonface) is one of the most evil things to come out of Australia since vegemite, (and he probably tastes worse too). Bert started his life as an average Australian, not knowing of the destiny that was to befall him. He was born some time back in the age of Jesus, and probably made money impersonating the virgin Mary. Somehow (nobody really knows) he was able to zap himself forward into the 20th Century where he would crawl into his new mother's vagina while she slept, and was later born fully grown. As a child he lived in Sydney spending most of his time pretending to be the Prime Minister, and enduring hours of sexual abuse from his parents (they weren't mean, how would you feel with Bert as a child?).

When he turned 12 he attempted in vain to take over the ACT with a band of eggs on which he had painted particularly nasty faces. He attacked the government by tossing his evil egg army at its walls. Security took him away to a detention centre believing that he was foreign. Whilst in the detention centre, Bert used his filthy charm to enlist their help to aid in his escape. Bert ended up escaping in a bucket marked "plastics waste". Realising his potential to gain followers, Bert (now 14) hitchhiked his way back to Sydney to try and gain followers and eventually become Prime Minister.

At the tender age of 16 Bert dropped his fantasy of being the Prime Minister, and instead turned his attention toward spreading his influence in another way. Bert Newton turned to Radio. Getting a job on radio was Bert's new dream; he loved spreading his filthy opinion to the people, and unfortunately for us one person did hear him, and they took notice. Bert saved his new found funds from the radio to begin a new PM campaign. He gained more money by perfoming in a freak show, and he had his face blurrily photographed and sold the images to astronomers. This is the basis of the "face on Mars" conspiracy. A few years later Frank Packer was about to start a television empire, Channel 9 and he wanted Bert to spearhead his campaign. So he approached him one day.

Bert Newton's real name is Albert Watson Newton. He was born in 1938 in Fitzroy, Victoria, although you should not believe this.

Unfortunately due to the death of Graham Kennedy he is no longer able to gobble his dick. Since then he has taken up a new hobby that still involves eating penis but this time it's Molly Meldrum's. 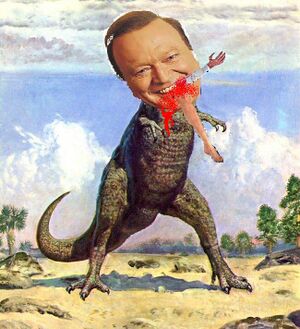 Bert Devours One of his many victims.

Bert Newton got a job at WIN; he was to be Frank Packer's apprentice. Frank taught Bert all he knew about television, and how it can manipulate the public. This tutelage included simple ways of frying babies, how to eat faeces and still look respectable, and how to summon Eye Beams. During this time Bert grew 16 levels, making him a level 19 Hell Spawn. Frank started to mould Bert's mind, shaping it to do his bidding, to eventually have Bert fulfill his evil agenda. So he gave Bert a job, the new TV show "In Melbourne Tonight". It was Bert's job to spread the filthy view that everybody should love their TV personalities. And it was startng to work. Slowly Bert became more and more enthusiastic in his job, sucking in more and more people, making them devote their prime times to him, making them do his bidding, growing in power as they same to him.

Bert still had his eye on being PM, but knew that now was not the time. He spent many a night roaming the streets in disguise as the moon and killing anyone who mentioned his rival PM or any other TV network. This is where his name Moonface came from. Marsface was tried, but never catched on. Some suggested Marshmellowface but the Marshmellow Protection Agency uproared at the idea.

Frank Packer was proud, his dreams were coming true, his empire was taking control of the people. As far as Frank and Bert were concerned, they commanded Australia between the hours of 6 pm to 10 pm. At this time Bert challenged Australia's PM Harold Holt. An epic showdown took place. Holt was never seen again. Bert became a dark person; he would command his viewers to kill asians and kitties, and to send Channel Nine their money, and he was getting away with it. He would personally devour anyone who opposed him. Even Frank was becoming afraid of his protege. Frank had to knock Bert down a few bars, but at the same time he had to retain Channel Nine's iron grip on Australia. The answer was clear, the next generation of evil was nurtured. Ray Martin was born.

(Ray vs. Bert) vs. Australia[edit] 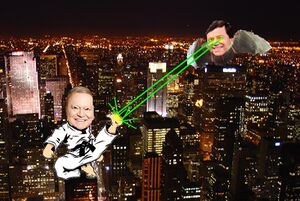 Bert And Ray Duke it out.

Bert Newton didn't realise that another personality was on the rise until it was too late, When Bert realised that Ray Martin had started to dominate the Journalism genre he got upset and attacked Ray on his tv show A Current Affair. After several fights a bitter rivalry was born, entertaining Australians while attacking each other, Ray and Bert were in a constant ratings fight, (and slap fight, with Bert's enormous fatty yukky hands). But one day they had had enough. Frank tried to stop them, but Bert and Ray went head to head in the be all end all showdown of the channel nine century. The fight took place in Sydney, casualties numbered in their thousands. Frank was killed trying to prevent it. Both of Frank's masterpieces attacked each other each dealing massive blows until finally the fight was won. Bert Newton had been vanquished by Ray Martin.

Turn sequence for the fight: 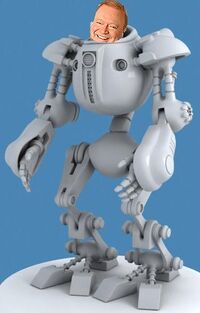 BertX without his organic materials grafted.

Kerry Packer did not mourn his father; it was straight to work, reuniting the Channel Nine team to produce the mind numbing television to control Australia. Ray Martin climbed the popularity stakes unopposed, but without Bert, viewers started to turn off Channel Nine. Kerry knew what had to be done. Bert Newton's body was exhumed and the billion dollar process began. Using only the very best technology, Bert was slowly converted into a machine, his mind immortalised in a hard drive. The new Bert had been born. BertX, as he was know by employees of Nine, jumped straight back into his own spot, and together, BertX and Ray took back all of their viewers, and even gained more.

Bert Newton found, that with his new body, he had many superpowers. Many people began to worship him, in a religion called Bertastasism. This worship included throwing rocks at the moon and filling Bert face casts with plastic (or Plaster of Paris for the poor). Bert relished his new life, both literally* and figuratively (*he had a relish making machine incorporated into his body).

Features of BertX's new body include:

Bert Newton's new reign was not to last. With competition heating between Networks Nine, Ten and Seven, there were a few people who did not know where their loyalties lay. The "channel surfers" realised that they were being brainwashed and decided to do something about it. Many years of research went into finding Bert X's weak spot and when it was the surfers went straight to the task of building a weapon.

Success. Bert Newton was attacked by the surfers and after a fatal flaw in his system, ceased operation.

The Second resurrection and The Descent[edit]

Network Ten was struggling in the ratings battle, and seeing the success of Bert Newton decided to get him first. A young roving agent was employed by Ten to infiltrate Kerry Packer's empire and retrieve Bert's body, and in return he would one day have his own talk show. After a top covert mission, the agent now known as Rove successfully retrieved what was left of Bert Newton's being and returned to Network Ten. Rove also brought with him terrible stories of evils that went on at Channel 9, one very chilling about a new experiment with TV personalities. Bert Newton once again went through a series of highly technical procedures and was brought back to life. Unfortunately, Network Ten did not realise how evil Bert had become over the years and upon his resurrection over half of the station's employees were killed by a raging Bert. After their unsuccessful attempt to make Bert their own, they locked him in the sewers below the city. Bert descended into his new lair, only coming out for a random television appearance, or to devour human flesh for sustenance. Kerry Packer knew that without Bert Channel Nine was doomed, so he put into action his new plan. He had spent many years raising another personality should anything go wrong. Daryl Somers was born. 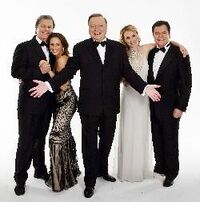 Bert Newton spent many years below Network Ten eagerly awaiting his return to television. Early in the new mellinium Bert started planning his escape. And escape he did, using his TV personality power that had magnified greatly since his descent (thanks to increased emphasis on TV personalities from all networks) and he used this to fight and charm his filthy way back to Channel Nine.

The day of reunition was a great one for Channel Nine, but spelled doom for the rest of the planet. Kerry welcomed Bert back with open arms. However Bert, bitter after years of abandonment destroyed Kerry. The circle was complete, the station had many personalities, and was now run by personality Eddie McGuire. Eddie made a master plan to take over the universe, starting with the logies. He picked 5 generations of evil to help him achieve his plans, now known as The Filthy Five. The world cowered before Channel Nine, hoping that Networks 7 and 10 could hold them off. Bert Newton led his filthy Team into 2006 with his new evil show "Bert's Family Fued". So confident with his powers to tear families apart and use them as troops in Channel Nine's army, he doesn't even try to hide it.

Bert Newton has formed several alliances over the years, mostly with other televion "personalities" Although he doesn't mind doing business with skinnies (people who aren't clinically obese), Bert much prefers a fulfilling friendship with a fatty. 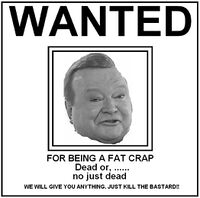 Obviously a poster made by somebody opposing The Bert. 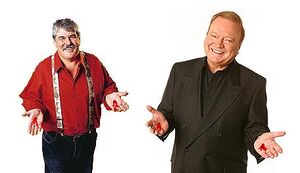 Bert and Huey displaying the stigmata together.