“Lots of people think that Ricky Ponting looks like President Bush. But I think that such a comparison is insulting to Mr. Bush.”

“I think he's an arrogant prick who can't captain for shit”

“Fuck, he can only be from Tasmania”

~ The Rest of Australia on Ricky Ponting

Ricky Thomas Ponting (b. December 19, 1874, Launceston, Tasmania) is a Tasmanian water rodent and the current leader of the Grand Knights of Australia, also known as the Australian Cricket Team. He is the leading batsman in world cricket at the moment, although his captaincy has come under question, particularly after the embarrassing double-loss to England in the 2005 & 2009 Ashes. He was humiliated by his opposite number Michael Vaughan, after the victory Vaughan was heard to shout 'OWNED' repeatedly in Ponting's face. Ricky Ponting is now considering moving to Jupiter as it seems the Australian public don't want him on their land. Famous cricket star Paris Hilton is being lined up as his replacement. After all the talk Michael Vaughan received a roundhouse kick to the side of the head by Chuck Norris. A large scar can be seen on his face but talks now say that is just his face. Ponting is believed to be the lovechild of a jug and a hamster. 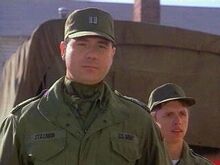 Ponting during his brief stint in the Army

Ricky Ponting began his career as a centre-forward for the Shaolin Temple FC, China. There he learned the art of Drunken Boxing from the undisputed master, Stephen Chow. From there he went to the US, where he was discriminated against for looking like a "foul prisoner who escaped from England's dungeons", but he managed to learn the Art of Cheating there. He returned to Australia and made his first performance at the Bourbon & Beefsteak Bar, Sydney. His impressive performance was witnessed by the Grand Knights of Australia, who immediately signed him up to be their no.6 batsman. Despite sporting a blackened eye at the media conference, he was visibly pleased with the outcome and was ready to repay the faith.

Leadership of the Grand Knights[edit]

Ponting's batting continued to develop under the guidance of such legends as Steve Waugh and Quentin Tarantino. Despite being earmarked to take over the leadership of the Knights from Waugh, the transition was always going to be a bloody battle. Eventually a "swordfight" was organised in the boys lavatory at Sydney Grammar College, umpired by Paula Abdul and Simon Cowell. Being the older of the two, Waugh failed to reach the dizzying heights Ponting obtained, and Ponting was appointed the leader of the Grand Knights.

The first year was easy-going, as the Knights set off to exotic journeys to Bangladesh, Pakistan and Oprah. However things got a little tricky as they encountered the monsters from England, led by Michael Vaughan. They played for a useless little urn containing the Ashes of some useless pieces of wood, and in another swordfight against Andrew Flintoff, Ponting was defeated.

For those without comedic tastes, the so-called experts at Wikipedia have an article about Ricky Ponting.

The embarrassing loss to England has prompted calls for Ponting to step down as the leader of the Grand Knights. His sword skills were simply insufficiently powerful, he can't conjure SUPER-SQUILLION-TRILLION POWERBOLTS like in Dragonball, and has repeatedly refused to protect his fast bowlers by using a third-man. Nevertheless, Ponting continued in the job, and in his 100th monstrous encounter, he scored two centuries and ensured total domination over the invading South Africans.

Calls from the Noble Lords demanding his resignation from leadership of the Grand Knights were swiftly silenced in 2006-2007 when he was believed to have received a vision from God (Who bore a striking resemblance to Donald Bradman; prompting suspicion that the second coming has been and gone) who offered him a chance of redemption by reclaiming the Holy Grail from the Monsters of England. Ponting rallied his knights, and surrounded by the monsters and their Barmy Army in the Australian city of Adelaide, proceeded to invoke a law now known as the "Wrath of Ponting," in which a furious and heroic charge was led by Squire Hussey to destroy the marauding English hoard in an embarrassing day for the English now fervently denied by Duncan Fletcher; the brother of recently retired Iraqi Information Minister, Mohammed Saeed al-Sahaf.

The massacre continued for a brutal 500 years, (or 5 tests, in modern terms) and by the end, Ponting himself was said to have stood undefeated atop the body of dead English Batsman Kevin Pietersen in Sydney. The rest of the team had already been burned at the stake for High Treason. Ricky Ponting declared the battle won. Michael Hussey and Adam Gilchrist were both knighted for their respective performances, although sadly, the war had claimed the life of Ponting's long-time right hand, Grandmaster Warne, whose tomb now resides directly above that of former English captain Mike Gatting (unfortunately there wasn't enough room to place them side by side). The "Wrath of Ponting" failed to be invoked during the 2007 Commonwealth Bank One Day International series, cedeing the title to the English once again

Speculation exists as of April, 2007 as to whether or not the "Wrath of Ponting" has been invoked again as Australia stand undefeated in the ICC Cricket World Cup; having decimated their rivals England, torn apart the usurpers of the title of "number 1 ODI team" South Africa, and all but massacred every lesser team that dared stand in their way. That only left the Irish smiling on their impending doom, possibly due to inebriation. If the Wrath of Ponting has not been invoked, it stands likely that Australia is set to be destroyed by newer-archrivals New Zealand in the final battle of the quarter finals.

Ponting was quoted as saying that "four eyes" (sic, Daniel Vettori) would be wise not to "misunderestimate (his) resolve" in the coming showdown.

As it turned out, despite poor use of the English language, he was right. And Australia proceeded to obliterate New Zealand, South Africa and Sri Lanka to become uncontested masters of the world; that is, until it went to India in 2009 for its worst blow ever. This time, Sicky Daunting was overconfident (more than he normally is, which is something) mainly because of the fact that his monkey-ape friend Andrew Symonds had still not evolved fully to human and was giving him the wrong ideas. As a result, among the four test matches they played, India kicked its ass in two of them, and as a result, Ponting's true prisoner-characteristics came back and he lashed out at Australia's own citizens. And then there was rebellion, and some say it would be only a matter of time before the team would be rid of an unevolved species and a "douche bag who fucking supports him".

In 2005 the British Government was criticized for letting this man into their country, mainly because he resembles a weasel.

2008 and 2009 saw what is commonly believed to be the beginning of the end of the Grand Knights as they have been known to date. After a series of victorious campaigns that all but obliterated their opponents, whispers of Rebellion from the far-coasts of Africa began to stir. Not content to sit under the heel of Australian domination, the Africans (predominantely from the South) assembled an elite formation of canibals and barbarians who were given a most holy quest - to infiltrate and destroy the home of the Australian Grand Knights - the Melbourne Cricket Ground. The success of this mission is still being measured, but after a brutal surprise attack (See also: Pearl Harbor) most of the Australian Knights were murdered and their training grounds laid waste.

The steely resolve of the invaders, led by Darth Graeme, Dark lord of the Smith, feared little for their own lives and believed in a manifest destiny that could only come with their own domination of the sport of Cricket, culminating in the utter destruction of the Grand Knights and their leader, Ricky Ponting.

In February 2009, the Grand Knights formally declared war on Lord Smith's cannibals, and waged an invasion of The Wandering lands of South Africa to avenge themselves of the travesty which was begun only weeks before. (The previous Indian domination of Australia is ignored by both the Grand Knights and the Cannibals, mostly because the Indians are considered twats.)

So far, Ponting has expressed a desire to continue to lead the Grand Knights, possibly to the 2013 Ashes Redux in England and reclaim his dignity by finding and bitch-slapping the old gentleman who had punched him on the mouth on his way to bat at the Oval. [1] He has so far fought off all attempts on his life, including numerous SMS-attacks from Shane Warne as well as temptations to join Dancing with the Stars. He is also rumoured to take over from Obi Wan Kenobi as the Jedi Cricket Team captain, and change his name to Obi Pon Tingobi.

Ricky Ponting's favourite phrase is 'Ah look', which he suceeds in using at the begging of every sentence. e.g. D'you want a beer punter? Ah look, i'll have one. This phrase might have been inspired by his first husband Shane Warne, his second husband Glenn McGrath or his current husband Justin Langer or his wife Adam Gilchrist. This phrase seems to have spread over all of Australia. According to an extremely important poll by Cricket Australia, over half the population of Australia use this phrase over 2,000 times each day.