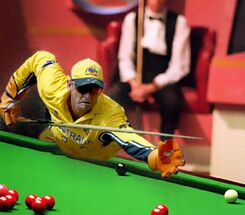 Adam Gilchrist is also one of Australia's finest snooker players.

~ Adam Gilchrist on being eye level with ass all day

Adam Gilchrist is an Australian cricket player/God. He can extract 8 octaves from four different species of cricket. He is also a batsman and has named and catalogued (but, interestingly, not discovered) more species of bats than anyone else.

To further add to the confusion Adam Gilchrist also hits small red leather objects of diamond-like hardness about large open grassed areas for a living. His skill at this is regarded as "High" or in DND parlance +8 or as we Ingsoccers like to say doubleplusgood. He is famous as the only man to hit a cricket ball so hard that he struck oil - though 148 women have done so (probably while "multitasking"). His batting technique has been likened to hitting the ball "upstyle."

He is noted in cricket as a "walker". And can be seen performing this complex feat of bi-pedal locomotion when he feels it proper or when prompted by a strange green man made of light who perches atop poles on street corners.

He has great difficulty playing musical instruments he has never seen or that might not exist (see below).

Mr Gilchrist is also a gifted wicket keeper. He receives his gifts mainly on December 25th and on his birthday April the 14th of November. As a wicket keeper he has the largest collection of wickets in the known world - nearly 400, many of which in some way involved Warnie.

Only abstract physics could describe what would happen if Adam Gilchrist and Andrew Symonds drew bats against each other. If there was some kind of deathmatch between Mahendra Dhoni, Andrew Symonds, Adam Gilchrist, Gary Sobers, Shahid Afridi, Chris Cairns and Kevin Pietersen no one has the faintest idea who would win, the only certainly is that a strange force only measurable in Benaud units would be produced. The force would likely rate a 'superb' or perhaps the rarer 'tremendous'. These are just two on the famous Benaud scale which is used to measure levels of 'Play' (the least being 'average' and the greatest being 'marvelous' - marvelous having only been recorded once when The Don returned from the dead and raised his career average to 99.999999999).

Mr Gilchrist's most common saying is "Bowling Shane-o" which he is heard to utter after any repetitive event takes place. On one occasion he is reported to have muttered the phrase after beat on a Kraftwerk record. It is part of his complex obsessive compulsive make-up which includes a compulsion to hit things when he is standing up and a compulsion to catch them if he is in any other position.

Adam Gilchrist is only a slightly lesser bowler than he is wicket-keeper. He can bowl with both hands, including the rarely seen hand 'Cronje', and bowl in any style (including Tiger-Crane). His fastest ever ball was clocked at 100 miles per hour and his slowest ball actually travels slower than the speed of entropy - thus attaining Stealth Spin (something only he, Murali and Warnie can do - though Murali's methods of coercing the ball to travel at sub-entropic speeds are suspect due to his fangled arm).

Gilchrist has been known to bowl an over of progressively slower Stealth Spin balls before the game and when they finally do re-enter normal space-time later in the match (on contact with the pitch, bat or wicket) he catches them getting the baffled batsman out or Gilchrist claims they are responsible for the "mystery nicks" his amazing hearing alone can detect (Maybe the size of his ears has something to do with this). His and Warnie's mastery of this art form, as keeper and bowler respectively, is the actual reason the Australian Cricket Team is unbeatable whenever they have enough time to prepare.

Because he is so phenomenally great at wicket-keeping (collecting, collating, cataloguing and so on) he has never bowled at competitive levels.

Gilchrist wears gloves to hide a shocking case of "gigantic hand" syndrome. For some less laid back religions a large hand is a sign of abomination. For a man with hands as large as Mr Gilchrist's failure to wear gloves will result in mass religious genocide. Or in the case of English ashes tour regicide.

Much like the majestic Sarus Crane or perhaps the lolling Hippopotamus Adam Gilchrist is a mammal. He is warm blooded and is omnivorous. Omnivores can eat anything they like provided it is edible. Therefore Adam Gilchrist cannot eat plastic or methane. Only one cricket player is universalivorous and that is the famed Inzamam ul-Haq. ul-Haq ate that Cornish Game hen Brick talks about at the end of Anchorman. Anchors are made from steel and Mr. Gilchrist has a steely gaze. This is because his eyes are grey.

Gilchrist's skill in catching bats is aided by his huge ears which resemble a bat's wings - he can flap them about in a manner similar to the mating dance of several species. Impressive though they are, his ears do not aid his ability to levitate, which, fittingly, is non-existent.

His ears are also a source of his awesome-powa when batting (er ... the type that involves a cricket bat, but not the type of cricket bat used in the capture of critters like the cricket and the bat, Wisden might disagree citing several obscure historical references but we are talking about hitting cricket balls (the red leather type (though they can also be white)) with a lump of willow not a ball made of crickets). Through precisely angling his ears Gilchrist can channel the energy of the wind and sun to produce and store qi for use when playing a stroke. However if the energy build-up is not released in time , a rend in the time/space continuum occurs and he disappears up his own arse!