Warning! This article may appear devoid of humour to audiences outside Australia. That's right, I SPELT IT WITH A U.

Rob Mills, or Millsy as he is more commonly known, is a type of vegetable. Preferably high in starch content, like my favourite vegetable, potatoes. Mmm, i love potatoes. Especially diddly dee ones. 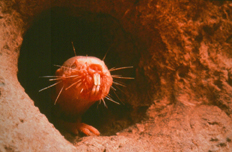 Here is Millsy in his normal habitat. And his friend, Gary The Naked Mole Rat.

Millsy rose to infamy through the televisual program Australian Idol. Nobody is for certain what his voice actually sounds like, for all who receive the sound waves of Millsy are known to spontaneously combust, spontaneously.

Using his natural talent, Millsy eliminated the competition, the judges, and the teenyboppers who watched the program. He was declared the Australian Idol Of 1327 and unfortunately signed to a record company.

His Career, Or Lack Of[edit]

For those without comedic tastes, the so-called experts at Wikipedia have an article very remotely related to Rob Mills.

Millsy had a centipetal and flocculatory career. He released a compendium of recorded pieces on his album, "Spontaneous Combustion". Sales for the album were disappointing, and a campaign was launched by Sony BMG. However, the campaign only went 1847 metres above ground before falling back to earth and lowering pH levels of streams and rivers.

Another campaign was launched, however this time without a liquid hydrogen fuel tank. Customers were offered vast sums of money to take the album into their places of residency. These sums exceeded $120874f9s87340 yet not a single person accepted the offer.

Millsy and Sony BMG, formed a plan to raise publicity and potentially give away the albums. Millsy released a tape of himself engaging in some activity highly unsuitable for children. It was released onto the internet, using viral marketing. The campaign however "backfired" (pardon the pun) as the internet spontaneously burst into flames. As a result, not a single person had seen the footage. Millsy was later forced to reveal what had been in the tape (of which the original copy also spontaneously combusted). He said, using sign language as to avoid instant death of the interviewer, "I was.. well yes, it was unsuitable for children. I'll admit that. I'll also admit the involvement of a very long time friend Paris Hilton. But it was certainly not what you think it was. Paris and I just shared a lovely night together. A lovely night together with this infrared camera of mine."

When Millsy was asked again about the tape, he admitted "Ok! You got it out of me! I was singing to her, and she might have spontaneously combusted or just passed out from food poisoning... while on fire."

Millsy has been busy being the butt of jokes and participating in an Uncyclopedia article. The future of his career looks like it could do with a haircut. Millsy doesn't plan to record another album, but perhaps more due to a court order prohibiting the replayation of any of his works and a second court order prohibiting a single sound to leave his mouth. Analysts say this swift action by the Federal Government of Australia was the only reason why it was re-elected.

Is He Part Of The X-Men?[edit]

Millsy's amazing natural abilities of Spontaneous Combustion have caused speculation (largely by himself) that he might be an X-Men. However, what is more amazing is that Millsy himself has not spontaneously combusted. He is currently being studied by scientists, as this might allow for a cure to be produced.

Some theories are that he might be deaf, and therefore oblivious to his atrocious singing. However this has been proven untrue, on a test on deaf people. An adequate sample size of 1000 deaf persons were assembled in a soundproof hall and given a live performance by Millsy. Upon closer inspections of brain scans, it was shown that all of the 1000 participants had lost the "will to live" section of their brain. This information could be vital in finding a cure.

You can make a difference by contributing to the Millsy Victims Charity, which helps victims of this malicious killing machine and funds research into finding a cure. You can also make a difference by writing utterly hilarious Uncyclopedia articles and spread the word on this problem which could spell the end of the world. Spell it like A-P-O-C-A-L-Y-P-S-E. He also hosts The Mint where he talks and stalls for time so they can scam as much money from retards as possible.