Spoida'man is Australia's premier superhero. He has saved many a naughty sheila from evil as he downs some Fosters and parties with guys named Bruce.

Spoida'man, or Poida' Pawrker, as he was once known, was an average Sydney area teen with lots of problems. The love of his life, Maury Jayne Wotson' didn't notice him because he was a tosser.

Spoida'man knew that if he was to gain entry to Maury Jayne's pants, he would have to do some heroic stuff. So he set out and completed several tasks to prove himself. He saved a area man's beer from going cold, he beat to death a rugby official who had made a questional call, and he directed the newest Russell Crowe movie, yes thats right another crap film with that dickhead. These actions not only granted Spoida'man entry to Maury Jayne's pussy, but it made him so beloved with the Aussie public, that everyone started claiming to be Spoida'man.

“People of the commonwealth, I'm Spoida'man”

Unfortunately for Spoida'man, whores like Maury Jayne were chock full of STD's and Spoida'man got syphilis and died. 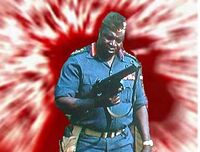 The possible cause of Spoida'man's death

They're faster than speeding bullets,

More homoerotic than the WWE!