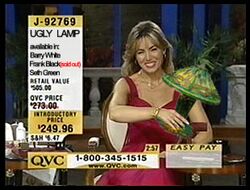 QVC:Purveyor of fine crap. Here we see a ugly lamp being sold to the gullible idiots who buy from QVC.

For those without comedic tastes, the so-called experts at Wikipedia have an article about QVC.

Started in 1973, QVC, or the "Quickly Vending Crap" Channel, is a home-shopping televisual show aimed at lonely thirty-somethings who still live with their parents, teenage mothers, and old ladies who smell of cats.

When the German Sausage Channel went into receivership in 1972, television executives decided that they had to replace the channel with another, otherwise the balance between good and evil would shift drastically and possibly bring about the end of the world, maybe.

Grasping at straws and running out of time, things looked grim for the executives, when one of the interns suddenly had an amazing idea. He proposed a television channel where idiots viewers could buy items that no sane person could possibly want. Others questioned exactly where he intended to buy all these goods, which is when he told them the genius of his idea. He drove home, filled up his car with all the crap out of his garage he didn't want and drove it back to the executives' room, and piled it on the table.

The intern in question was none other than Michael Jordan, and at that moment QVC was born.