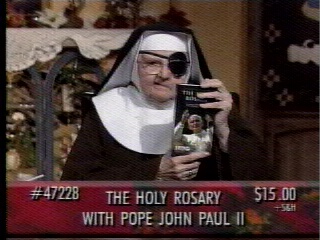 For those without comedic tastes, the so-called experts at Wikipedia have an article very remotely related to Eternal Word Television Network.

Officially approved by The Vatican, it is the supreme television network which officially broadcast speeches by God, Jesus Christ, and shrively, old nun named Mother Angelica. Its nickname is "The Channel Nobody Watches". The network's ideas include worshiping Mary as our supreme saviour and mother, the damnation of Protestants, Jews, and Muslims, transforming Rome into the capital of the Earth, crowning Pope John Paul II as God, and making Pope Bennedict XVI the supreme dictator of the world. It is a nutty Catholic channel that is overrun by mortal sin and run by robotic nuns, old priests, Italians and Polish people. It has been rated by the American Television Association as the worst watched show in America, right behind Government TV and Cornerstone Television. The only good show on the network is Jesus and Pals, a spoof with the premise "What if Jesus was not the lord, but a parking lot attendant".

EWTN was first conceived by Jesus in the Bible:

"And then after we control the radio with that Rush Limbaugh guy, John, and Mother Angelica will build us a television network: EWTN!"

Several nuns at a small monastery received a vision to build a television network to spread the "word that Mary Magdelene is better than Jesus." The nuns began broadcasting sermons by Mother Angelica in a basement, and soon some other priests from little, right-wing churches joined in. The churches and monastary has no money so Jesus sends down checks from heaven.

In an attempt to actually get people to watch this channel, Raymono Aro wrote a book called "Mother Angelica: The Divine Story of a Nun, Her Spasms, and a Network of Hatred".

EWTN encourages its younger viewers to follow in the footsteps of the Pope by joining the Hitler Youth. EWTN proclaimes that we should spend our entire days praying to Mary statues, saint cards, and crosses to help us find the faith and grace of Jesus Christ. The network supports the coronation of John Paul II as the second Messiah and wants to make Rome the capital of the world with the St. Peter's Basilica as the new White House. It believes that all men should become non-gay priests, the little boys altar servers, the women nuns, and girls as members of the church choir. The network doesn't like non-Catholics and thinks that Protestants are morons who just don't listen to the Pope and that Orthodox people are crazy Greeks and communist Russians. EWTN philosophy states that Jews are human demons and that Muslims are terrorists trying to blow up the Vatican. However, it never has openly admitted its hatred of other religions. It also believes that Jesus was really a knight who killed his enemies, not a peaceful prophet.

EWTN supports a variety of religious broadcasting for the whole family.

Donut Man and his poor indentured servant Duncan, who was infused with a soul and forced to convert children to follow the teachings of Goa Tse as part of his milennia-long misery, and is hopeful that Jesus fills his hole.

The Faith Factory for 10 year olds and under. Parents force little kids to watch a boring nun talk about how to properly hold the Eucharist. It also includes its "Marriage for Staright Catholics" talk show hosted by a priest telling us that divorce is evil, gay marriage is worst than the Holocaust, and that having sex before matrimony is worse than murder, although slightly better than kitten huffing or attending a Jesuit school.

There's also that creepy Donut Man show with the talking donut and that guy in the conductor's outfit talking about filling the hole with Jesus against the recommendations of Dunkin' Donuts. At least we think so, though we haven't ventured to watch the special version of Donut Man on EWTN After Dark. 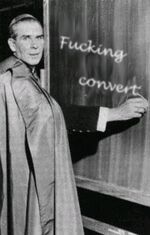 Recently, the Vatican announced that the next pope will be chosen on a reality show to be aired on ESVN. Father Andrew Greeley will host the show and losers will be burned at the stake on live TV. The competition will be open to all heterosexual, male Catholics in good standing with the Church and anyone else with net assets above $35 million. The title of the show was not announced, but anonymous sources state that Survivor: The Vatican and The Papacy Reloaded are being considered (a celebrity wrestling programme featuring the Doctors of the Church was rejected by the board of directors).

Some of the more famous broadcasters on the network are Pirate Nun herself, who occasionally serves as a celebrity announcer for frisbee games between the Swiss Guard and deserters from the Israeli Defense Forces; Al-Qaeda and the Kenny Kuhn Klan also field teams. Dr. Strange is best known for his inspirational series, If You're Not Catholic, You're Just not Listening.

Another famous presenter was an articulate Black Sheepdog who gathered a faithful following. Despite its public resemblance to a Catholic priest the network removed him in 2011 after the Vatican was unable to renew his registration.

Religious news anchor, Pee Wee Herman,distorts the news to show that the Catholic Church is better than all other religions and governments. He also interviews neo-Nazis like Pat Buchanan and Regnum Christi cult freaks. The World Over even makes FOX News look liberal - not that this is necessarily a problem.

When Pope John Paul II died in 2005, Father Robert Levis felt that it was his time to wrestle the Vatican away from the liberals. He launched his campaign for Pope and made several trips to Rome seeking support. When Mother Angelica heard about Father Levis' politiking, she decided to launch her own campaign to become the first Popess in history. Fr. Robert Levis argued that despite Mother Angelica's facial hair, arm pit hair, uncontrolled belching, and bad breath, she is not a man. He states that the Bible clearly shows that only humans with a penis can hold the office (See the Book of Peter Chapter 69: 6-9). Undefeated, Mother Angelica battled on to prevent Robert Levis from becoming Pope. Despite his conservative credentials, membership in the NRA, and hate for Democrats (who do Democrats hate more? God or George Bush?), she still accused him of being a "liberal loon." Taking advice from Anne Coulter, she decided the best way to ruin Levis' attempts at reaching the Papacy was to out him as a homosexual because he never succumbed to her sexual advances. When questioned about the morality of her efforts to out him as a homosexual, she replied, "Its not like he hasn't accused others of being gay before."

Aimed at violent, holy, teenage Catholics who express their hatred and emotional problems through prayer, these lifeless 15-year-old call upon all young adults to pick up a sword and fight against the Church's many enemies, including the Cissegara and the Society of Jesus.