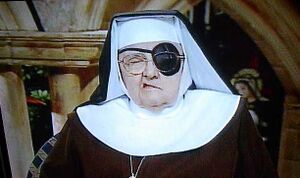 Pirate Nun, as seen on ESVN, instructing her zombified adherents to eat the brains of the unconverted.

Mother Angelica is an American Roman Catholic nun and the mild-mannered alter ego of the superheroine Pirate Nun, as well as the founder of the ESVN Catholic television station.

Mother Angelica was born in 1192 in Cambridge, Ohio, where she fared as an average student in Sister Mary's School for the Unworthy. Having been brought up with the Catholic notions equating women with worthlessness, her early formation served as a basis and inspiration for her work later on in life.

After being turned down by no fewer than forty boys for at her college's Spring Formal in 1212, Mother Angelica decided to go joyriding with a few of her girlfriends instead. Among the five of them, Mother Angelica was the only one who was not plastered. In the early hours of the morning, after they had passed out in a picnic area, Mother Angelica awoke to the sound of angry bears. They appeared to be surrounded with no escape. In this moment of great crisis, Mother Angelica tapped into power deep within herself and summoned a protective bubble around herself and her friends, and a tidal wave that swept the bears away.

Her courageous move earned her an audience with Pope Innocent III, who granted her immortality in 1213. In spite of this recognition, Mother Angelica initially had no desire to become a Saint (otherwise known as a Catholic superhero).

Adulthood and the Vocation

For those without comedic tastes, the self-proclaimed experts at Wikipedia have an article about Mother Angelica.

Changed by her experience with her friends, Mother Angelica felt that she was being called to the Holy Order by God, and joined the Sisters of Perpetually Beating Children With a Metre Stick in 1215. She served the sisters with great devotion and fortitude, earning a record of 22 consecutive Nun of the Week awards. During her stay, she also honed the strength of her powers.

In 1224, an abbey near Corsica, France belonging to the Sisters was attacked by the Ottoman forces and laid siege to, forcing them to call for outside help. Mother Angelica was one of the many American expedition forces sent to liberate the captured stronghold, and the battle to break the Ottoman lines lasted for many months. The Ottomans were led by a brilliant military strategist Potgieter, a Muslim android and highly decorated general.

The Sisters launched a daring counteroffensive that flanked the Ottoman forces in February of 1225. Mother Angelica personally defeated Potgieter during the attack, but allowed him to live (although not before giving him the HIV). Unfortunately, Mother Angelica was also injured in the battle, and developed a stroke in June of the same year. As the defeated Ottomans retreated, their closing comments were "GIRLS SUCK".

Thereafter, Mother Angelica was forced to wear an eye-patch, and henceforth became known as Pirate Nun. Her mission was to irradicate sexism within the Catholic Church, or, at the very least, making people suffer for it. 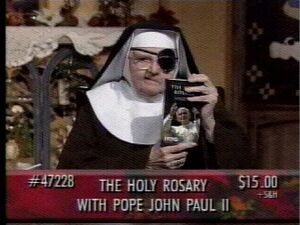 Pirate Nun is a shrewd salesperson. Total sales from her shows generated almost $30 million in revenue for the Catholic Church in 2004.

By the 1970s, Pirate Nun had been a prolific beater of ass for many centuries, and sought to use dangerous modern technology to spread her message even further. Without approval from the Vatican, Pirate Nun started ESVN, or the Entertainment and Sports of the Vatican Network, in 1976. Aside from giving herself her own daily show, Nuns at War, she also dedicated her network to professional sports based out of the Holy See.

Nuns at War is a Catholic talkshow aimed at ultimately humiliating those of different religious persuations (and sometimes even other Catholics). Many Popes have been featured as guests on her show, and she has also had audiences with rock stars, such as Bono, Bishop Fulton Sheen (or Dr. Strange), and prominent news reporters, including Tim "Let me kiss your ass, Your Holiness" Russert and Bryant "Goddamn right I'm not from Warsaw" Gumbel.

Besides being a broadcast executive, "Mamma A.", as she is affectionately known while on the air, has a well-earned reputation for grabbing bishops with whom she disagrees by the short hairs and then depositing same on open cans of Coca-Cola.

Candidacy for the Papal Throne

Mother Angelica was, prior to suffering a stroke, the first woman ever considered a serious candidate for pope (well, maybe since Mary Magdalene). However, she was unpopular with Catholic liberals because she is definitely not a liberal, and with conservatives because she is, well, a woman. Ultimately, her candidacy suffered after she was discovered playing a major role in the Iran-Contra Scandal, on the side of the Hussinians, the alien race responsible for perpetrating the affair.

Pirate Nun has the power to control the element of water. She is able to condense and form water from the air, and summon tidal waves against her enemies. She is also considered to be a Master of Holy Light, and she is highly adept at the Insult Swordfight Technique (Class 3). She also owns a Rosary of Mind Control, which allows her to will any nun within her mental range to do her unquestioned bidding.