Unsuited to be confused with Uncyclopedia

An encyclopedia is a work of fanciful illustrated children's literature with lots of bright colors, short paragraphs, and pop-up images.

Encyclopedias are made for children and as such are primarily a book of words that, when read, pull you into the infinite depths of knowledge and or madness. Unlike uncyclopedia, encyclopedia are often dumb, one of the dumbest one is Wikipedia.

The very first encyclopedia was created in 666 B.C. by Conan the Librarian, who stayed up for seven days and seven nights editing Wikipedia articles on immortality inside the wilderness of the abandoned mall. Climbing the peak of man's knowledge required a massive team of highly trained Sherpa. Almost to the summit, Conan set out ahead on his own. Reaching the crest of the mountain he did battle with a yeti. A voice echoed from the snow, that of the Snow Maiden lulling him into slumber into the snow. But in his sleep, Conan had a vision, "Go forth and gather two of each animal that walks the earth! Once you have done this, return and establish libraries!" Venturing into the lands around the mountain, Conan spent 4 years gathering the animals before the flood from the melting of the Hyperborian ice caps. 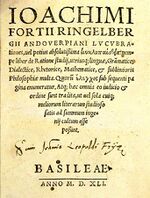 The meaning of this should not be Greek to the reader. One must love both circular logic and repeated violation to recur to an encyclopedia. Its alphabetical format makes it virtually impossible to find anything in it. Most encyclopedia users simply spend hours reading the text (and looking at the pictures — Every full-price encyclopedia contains a couple of photographs showing bare tit) and thinking he or she is learning, although retaining nothing the next day.

Though the notion of a compendium of knowledge dates back thousands of years, the term was first used by Oprah Winfrey, who has parlayed failure to retain material into a veritable art form. Oprah's television show is as good a sleep aid as is a good encyclopedia.

In British usage, the spellings encyclopedia and encyclopaedia are both current. Although the latter spelling is considered more "proper" by the queen, the former is becoming increasingly common in British English, in part due to the spread of American English. In American usage, only the former is commonly used. The spelling encyclopædia was frequently used in the 19th century and is increasingly rare, although it is retained in product titles such as the H.M.S. Encyclopædia Britænnica and others. In æddition, cyclopedia and cyclops are now rarely-used shortened forms of the word, originating with Odysseus in the 12th century BCE.