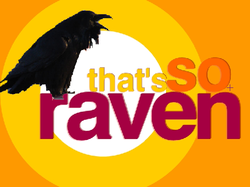 The show's original title was That's Not So Raven; this was changed by producers for unknown reasons.

“Come on, she's black, she's psychic, and she's fat. It's hard being like her. Giver her a break.”

~ Perez Hilton on That's so Raven

That's So Raven is a popular american wildlife documentary broadcast on the Disney Channel. Set in Baltimore, the plot revolves around a common Raven behaving typically and tackling the social issues of the day. 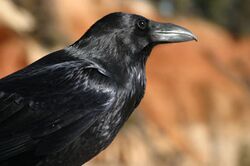 Raven would often spend her Wednesdays perched on her nest looking for communists.

Each episode is broken up into different segments as Raven or other birds of prey deal with real-life situations, such as molting, racial prejudice, and crippling depression. The focus of the show is Raven and her day-to-day habits although on certain occasions the focus of an episode will switch to a neighboring sparrow or occasionally a finch. Although in one of the episodes, Raven was eating a sandwich the whole time.

That's So Raven deals with many social issues in today's societies through Raven. Racism is constantly touched on, and the ravens are usually treated like second-class citizens by all seagulls. One memorable episode dealt with the group of ravens accepting the newest raven in town into the group. At the end of the episode, the new raven is revealed to be a seagull covered in oil. The seagull precedes to peck out the eyes of the ravens' leader.

The most notable show of racism was found in the episode titled "Hurricane Isabel." In this episode, most of the city birds were leaving before the hurricane hit the city. Whenever new birds joined the group leaving the city, the ravens were always forced into the back of the flock, along with the crows, to make room for the other birds.

For those without comedic tastes, the so-called experts at Wikipedia have an article about That's So Raven.

Much of the show features the dog-eat-dog mentality of today's society, as shown by the ravens' yearly fights with their top rivals, all of which are cleverly disguised football jokes... did I say that out loud?:

These contests were usually brutal. Some years the ravens came out on top, but some years they were nearly wiped out by the others. In recent years, the Steel Men of the North have been eating a mysterious burger that has given them much strength. The ravens have yet to figure out how to combat this. 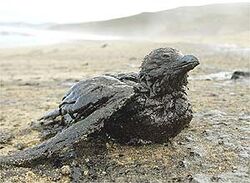 Sure, you can feel sorry for her, but if you've ever watched The View, you'd see she's kind of a bastard.