From Uncyclopedia, the content-free encyclopedia
(Redirected from Tomb Raider)
Jump to navigation Jump to search 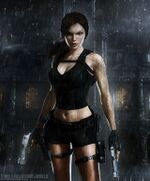 Lara Croft with her "please nail me hard" look

Lara Croft is a highly respected and esteemed archaeologist who everyone would nail given the chance. It has been reported that she raids tombs but those reports have been unsubstantiated. Miss Croft's lawyers have contacted us and told us that any suggestion that she does in fact raid tombs would result in them suing our sorry asses. So please, for our sake, do refrain from any such comments and/or accusations.

Lara was born into a family of wealthy English nobles who definitely did raid tombs, along with raping and killing tribes of people in their small, simple cities in South Mexico, Africa, Asia and France. Lara's parents wanted her to take their place when they were killed in the family business, so they quickly trained her in gymnastics, hand-to-hand combat, and of course shooting at the age of 2.

For those without comedic tastes, the so-called experts at Wikipedia think they have an article very remotely related to Lara Croft.

When she was 12, Lara solved her first puzzle completely alone in a different universe on the planet Urgon wearing a space traveling monkey hat. Her parents were very pleased at this, but when she eventually became a moody teenager who experimented with drugs and other women, they were quite pleased as well.

Shortly after her parents being turned into babies, Lara "accidentally" killed her mother in the Himalayas on an adventure. This happened when Lara walked up to an ornate stone dais with a sword set into it and pushed the sword in. Her mother, who she turned into a baby, was with her and she managed to be right in the middle of the dais when Lara pulled out the sword. Lara managed to jump out of the way before the FRYING beam flashed from the ground. It wasn't pretty, her mother had been fried to a crisp. On the way back home Lara just about died from hunger and had to eat her mother and leave her bones behind. Officials found the bones later but decided it was the remains of a small wolf. Shortly after Lara ate her mother she sent her baby father to Thailand BY HIMSELF to retrieve some artifacts. Natla smote him and Lara was arrested for 2 years for extreme child abuse. She got out of jail at the age 26. She continued her life as normal after that.

In 1999, at age 31, Lara became trapped in a Tomb in Egypt, and was assumed to have died. She had nearly escaped from the collapsing pyramid of the Tomb of Set. However, she refused to let Werner Von Croy save her, since he had only recently sent several dozen mercenaries on death missions after her in some kind of vain attempt to kill her. However, those close to her should have known that several thousand tons of sand and limestone were not enough to bump her off, and she lived to raid many more tombs.

In 2003, she decided to try and make amends with Von Croy at his apartment in Paris, deciding to brush aside the hundred or so of Von Croy's staff that she had wiped out as water under the bridge. However, he was killed by a serial killer dubbed "The Monstrum". She then set off on a Miss Marple style quest of overly long dialogues and mysterious people whose bodies flash away into nothing when killed, before finally discovering that "The Monstrum" was in fact a man named Peter Eckhardt. Despite being a supposed immortal superhuman, she quickly found out that as with every man she ever meets, he was nothing a few bullets and a bit of running around couldn't sort out.

In 2013, a recent university graduate, name unknown, was shipwrecked on an island off the coast of Japan. Driven almost to the point of insanity by 3 years of tedious studying (as any college student can sympathize with), she finally snaps and decides that she is in fact Lara Croft. Believing she is now on an island inhabited by the Sun Queen Himiko, she sets out to destroy any plane, helicopter and boat that attempts to rescue them, blaming it on storms created by Himiko's trapped soul. She also believes that the island is inhabited by a religious cult of several hundred Americans, all of whom must be shot dead with magically self-transforming guns. Having killed 4 of her shipmates, she takes her girlfriend Samantha to the highest point on the top of the mountain, strangles her to death, and comes back down holding her dead body, claiming to her remaining 2 shipmates "she's going to be all right. We can leave now". Although clearly dead, they do not dare question their insane friend, since they know what she is capable of. It is unclear exactly what happened next, but she was probably locked up in a high-security NHS mental institution.

Several women have claimed to be related to Lara Croft, but none has suceeded in proving so. One girl claimed to have traveled to Siberia upon hearing ‘the voice of the Prophet’ in her head, went beneath a glacier and claimed to have found a city she called ‘Kittehz’, named after her love for kittens. Another woman said she had slayed Kukulkan, the Peruvian version of Ra, in some lost city she called Potaititi, a city she called after potatoes. Other ones also claimed to have sided with monsters such as ISIS, Horus, the Dallas Cowboys, Kratos and Commander Shepard to defeat the likes of Pikachu, Set, Dwayne the Rock, Ronald McDonald and Donald Trump. However none of them have any proof to back up their claims, and as such they have all been dismissed.

The World Health Organization has classified Lara Croft as being the second greatest health risk to humans of any female creature known to man, behind only the female mosquito. They warn that even brief exposure to Lara Croft is likely to lead to severe lead poisoning; swelling and bruising of the skin; and catastrophic blood loss and say that the symptoms are almost certain to prove fatal if not treated immediately.