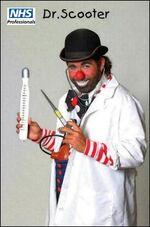 Welcome to the National Health Service (NHS) The NHS is publicly funded so it's completly free. Of course this is reflected in the standard of treatment.

On arrival at hospital don't expect someone to open the doors for you, and don't expect to see a doctor immediately,

not on your first day.

Or even your first week.

If you really must see a doctor there is something called a 'waiting list', if you haven't booked your accident in advance you'll just have to wait in line like everybody else. Especially if you want something for free. It's only fair. And remember to have your appointment card ready when you reach reception. Otherwise you'll be sent home.

We don't care how many limbs you're missing.

If you can't be bothered to call in advance and tell us you might be getting killed, you obviously don't care about living.

So really we're doing you a favour.

We find this system saves a lot of time.

If you haven't actually got fingers to hold the card in, don't be alarmed, just ask someone to cellotape it to your head.

Always wipe your feet on the way in, the hospitals are dirty enough already, without you dredging more filth inside. Unless of course you don't have any feet, in which case be careful not to drip blood on the floor, someone might slip and get hurt.

And if you happen to grow bored whileblood and intestines seep through your fingers, and drip on the coffee table, don't panic. We've got a huge selection of magazines, all from 1983. But don't bother looking at the crosswords they've all been done, however there is a spledidly interesting article about a pencil factory on page five, enjoy! And if you could wipe your organs off the table that would be helpful too.

The organisation does have one or two tiny budget probelms. As you can probably tell there have been cutbacks. You may find, if you eventually reach your appointment, the doctors have been replaced by mannequins. Don't worry, we have realised. The mannequins, some of whom are children, are a cost cutting measure. They are fully trained, but generally incompetent at performing medical procedures, however they're excellent at carrying out do not resuscitate orders. Because we here at the NHS firmly believe in a patient's right to choose, if they choose to live, thats ok. If they choose to die, well..it would be very helpful. 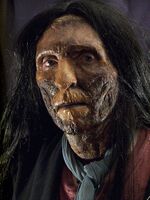 The Vice-President of the NHS says...'NHS Care made me the man I am today!'.

If you're still worried about being operated on by a lump of plastic in some jeans, it is comforting to know that overall the reaction of patients to plastic inanimate, doctors was positive, most can't tell them apart from real doctors! However some cynics have complained of their tendency to simply stand behind windows all day, wearing expensive clothes. But at least they dress well, and their hand writing's far more legible than human doctors. In my opinion the best thing about them is they won’t answer back, and can’t talk to journalists. 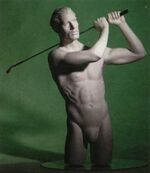 A new breed of doctor, for the 21st century, note the futuristic surgical implement.

Of course the reason for all these problems is obvious, fat people, the locusts of our time. If they don't stop breeding soon we'll have to give up completely, with waistlines swelling faster than, the bloated corpse of our finances. And with creditors shrieking like vultures. We've tried to adapt and make improvements. It is difficult though. We're swamped by hordes of the obese. There are now so many that Britain is slowly sinking, under the weight of its own flab. And the NHS seems to be drowning the fastest. It's not like we haven't tried, we widened hospital doors to american standards, made toilets from reinforced concrete, and hid all the vending machines. There's nothing more we can do.

As you've probably heard some of our hospitals are in need of a little spring cleaning. Most of the tabloids would have you believe that hygiene is non existent. Only last week the Daily Mail claimed that:

"Most hospitals also double as farms, with livestock wandering the corridors and wards, which are knee deep with manure, and the patients own vomit. If somebody slips they are bound to drown in the steaming sludge and be lost forever, their bodies are rarely recovered, the rats see to that. Rodents also tend to pick off the older weaker patients at night, leaving only a pile of gnawed pajamas and congealed saliva. The patients are fed on the same swill as the pigs, or often just leftovers which the pigs spat out and vomited on. Doctors insist this mixture is 'nutritious’ as is the mercury the patients are told to drink, to cure their arsenic poisoning. Conditions have been described as medieval one patient told us If you’re ill all they do is cut off limbs, and stick leaches on your head"

Most of this isn't true, at worst the manure is ankle deep, barely noticable, we've painted most of it white, now it just looks like the concrete floors have grown a interesting type of fur. Most people comment on how 'different' it looks, they of course don't know the truth, but why should they? It's none of their business and none of yours either, so stop prying. Only a percentage of hospitals are used as farms, so what if that percentage happens to be ninety, you try making money out of sick people. It didn't work for the Nazis and it hasn't worked for us, end of story. Its not that bad anyway. We aren't barbarians. The pigs are kept in separate cages from the patients. Most of them think they brighten up the wards, as do the chickens. To be honest I think people today are far too paranoid about filth and disease, relax, take a shit on the floor, see no one's died yet, it must be ok. Thats the logic we used. And so what if the filth has bred an invincible type of bacteria, at least we've achieved something, right? And that's what counts.

I'll admit we have had some equipment shortages recently, ever since 1948. But it's not as terrible as the cynics would have you believe, it's not like the NHS does surgery with plastic utensils stolen from KFC. They're purchased from KFC,there is a difference. And does it matter if the scalpels are rusty and blunt, would you rather we used shards of broken glass? They work we've tried them. Do you want us to try them on you? Didn't think so. And honestly we would like to wash our hands before operations, but we'd have to walk three miles to the well, with the bucket and then all the way back to the hospital. Then you have to pick the dead insects out of the water, did I go to medical school to do that? I don't think so. Anyway you'd be dead by the time we'd finished. Of course usually you'd be dead after the operation. It depends whether you want death sooner or later, either way it's going to get you in the end, you might as well accept it, I have. 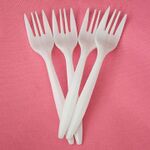 Our State of the art surgical Equipment.

Many critics have questioned the integrity and qualifications of our non-mannequin doctors. But we're still adamant that an O level in catering and other domestic sciences is perfectly acceptable training for a doctor, butchers aren't that different from surgeons. They both work with blood and knives, I can't see the difference. Can you? And it's not like NHS doctors receive only the barest of training: 5 minutes spent with a rusty spoon, a dead hobo, and instructions to 'drain the humours'.

People shouldn't believe these scare stories, that hobo had left his corpse to medical science, we were perfectly entitled to gouge it to pieces with spoons or any other form of cutlery. These arguments are ridiculous, like the people who say we 'overuse' amputations. People have more than one leg for a reason, one of them's just a spare, you don't really need it, it's like getting extra pieces in a mechano set. It's perfectly alright to throw them away. Amputation is a well established, medieval medical procedure. It's our standard treatment for most medical complaints, including the common cold.

Is like that pensioner who went running to the papers, like a media whore and told them he "just wanted an aspirin, and instead they offered me assisted suicide." People like him have no gratitude at all do they? We offer him not just one asprin tablet, but 50, for free! And he complains about it. What kind of warped mindset is that? It makes me sick. Not sick enough to see a doctor, that really would be insane. But still rather ill.

On public health, obesity rates have risen by a "Perverse" 500% since 1980 and nearly 25% of the adult population is obese, this is a direct consequence of the NHS belief that fat was a cure for all known diseases. A government report, The NHS and the NHS Plan: Is The Extra Money Working?, also cast doubt on Government claims that more hospital surgery is being carried out during the day. But our weasel faced snitch told us a different story:

“Most of the time they just cut up dead pigs.” Our informant told us, “Surgeons will do anything to look like they’re busy. Often they just go to the local butcher’s shops, and buy plies of meat, which they dump on the operating table, and if the hospital administrator comes by, they pretend to cut it up, all the administrator can see is blood and knives. He assumes that they’re doing their jobs. If any genuine patients come in, they just lock the operating theatre doors and pretend they’ve lost the keys. Until the patient either leaves or dies. Some times they deflate tires on ambulances. On Mondays it's worse. I’ve seen them shoot at ambulances, with machine guns, and drop grenades out of the windows, to keep them away from the hospital. Often the medics have to fight their way in. Patients have been used as human shields, on a regular basis. ”

The NHS complaints procedure is notoriously bureaucratic and obstructive. Evidence has shown that some patients were locked in ambulances (primitive horse drawn carts with square wheels, which transport the 'afflicted' to their graves.) outside hospital for weeks, in an attempt to prevent them from complaining. “They wouldn’t let me go till I ticked the excellent box.” one distraught child told us. The NHS often accuses those who complain of witchcraft, and conducts vigilante burnings of 'witches', which are not supported by the government.

Public spending on the NHS in England has increased under Labour from £44 billion to £76.4 billion. But James Gubb, the author of the report, said his study showed the money had not been well spent. “There were trips to Vegas.” He explained. “Money was lost, shit loads of money. They could have spent it properly; instead they pissed it up the wall.” Apparently the NHS report on expenditure simply had one word written on it, “Blackjack.”

He added: "In the vast majority of areas improvements in the NHS have in no way increased in proportion to the vast sums of money ploughed into its coffers. Is the extra money working? To a limited extent one has to say yes, for there have been achievements; lost pens have been found. However the NHS's historic inability to deal with anything of a medical nature still remains painfully apparent.”