From Uncyclopedia, the content-free encyclopedia
Jump to navigation Jump to search
You're Gonna Die!!!
left
Whoops! Maybe you were looking for Post Apocalypse?

Guess what, you're gonna die!

A lot of people think they'll live forever. These people are FOOLS. They are all destined to DIE. The only people who won't die are immortals. You, however, are not one, so you will die. Well i dont know why i am talking about this... 'SIGH'...

You don't only live twice[edit]

The person who said this is either a liar, an ignorant bastard, or a Martian from outer space. I am not, of course, referring to M15. You live once and you die once (although once written twice is twice, and twice written once is once... this is confusing). But I stand by what I said before. The only people who live twice are those people with canards wearing kilts.

What Happens When You Die[edit]

A lot of religious freaks and philosophers have pondered this question like idiots, when all they need to do is perform a simple experiment:

1) watch someone die 2) see what happens

What happens is the body is eaten by germs and worms and starts to smell so bad that it will kill anyone who remains within 200 feet of it. Therefore, after someone dies, they are generally either buried or burned to prevent them from dragging everyone else down with them.

Some people have themselves frozen when they die, apparently in the hope that someday some cannibals will find them and eat them.

There are many different ways to die, but they involve one fundamental thing, which is that the person STOPS. A universal trait of all people who have died is that no part of them moves. Unless you count the horrible stink emanating from the corpse.

After decades of searching, the same government scientists who discovered die have also concluded that there is no way to not die. All the evidence points to one startling fact: die is the only thing that everybody wants to do. Because everyone DOES die, and because most people generally do as they want, logically, most people want to die. The researchers conclude that people who try to not die are among the unhappiest people on Earth, because they are trying to do what they don't want to.

This guy is smiling cause he DIED.

This has been proved in other ways besides logic, too. In the simulations known as video games, thousands of players cooperated for years in an experiment where their characters attempt to not die. After 10 years of the simulation, 99.999999 percent of all players had "died" at least once. The lone holdout, former Atari 2600 owner Gustav Jones with 1,256,034 kills and 0 dies, failed to go online for a week in April 2009, and was discovered dead in his mother's basement. The autopsy revealed that the trauma of being deprived of die in the simulation caused Jones's own DNA to compensate by disintegrating.

What To Do If You Die[edit]

The only other legal exception is in the case of Frankenstein, because he was reanimated against his will. But in exchange for being allowed to move, Frankenstein is required to make sure lots of other people get to die. 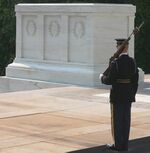 Among the most likely to break these laws are the members of the philanthropic groups known as "armies." Members of these groups selflessly distribute die with no thought of reward, and for their own good are retired once they themselves have died. But some are so enthusiastic about distributing die that they are driven to disobey the law, leading most modern nations to imprison them in special jails. The largest such prison in the United States is the Arlington Maximum Security Cemetery, surrounded by a zombie-proof fence and armed guards at all times. The most notorious inmate of this prison, The Unknown Soldier, escaped so many times that he now is kept in permanent solitary confinement within a concrete vault.

In ancient times, people were happy. None of them had to wait any more than about 20 or 30 years to die. There were always dangerous, helpful things. This had an added bonus of making life exciting. Normal life was a short series of exciting things followed by die. Things like giant mammoths that helped by stomping on people, and big tigers and lions which ate people, and by natural disasters, such as the fire going out..

But eventually misguided people started ruining things. They produced so-called "advances" like "wheels" and "bows and arrows" to fool innocent people into avoiding die for 40, 50 or even 60 years. Wise men fought back and invented war.

The Golden Age of War[edit]

War was actually invented by accident. At first, aging hunters, desperate to die, would fling themselves against herds of mammoths in the great hunt. The mammoths would always trample plenty of hunters, and the lack of hunters meant many women and children back in the village would starve, too, producing plenty of die. These hunts were very successful in the promotion of die, but only when there were plenty of mammoths around. Eventually the mammoths grew jealous of all the die the humans were getting, and they started demanding to die too. They liked it so much, that eventually, they nearly all had died.

One day, hunters from two different villages were stalking the last herd of mammoths. Both groups could see there was about to be plenty of die for the mammoths, but not very much for any of the hunters. One of the hunters had a brilliant idea, and humanity made the evolutionary leap known as "cooperative hunting." This hunter decided to help the other tribe of hunters by giving them some die. Instead of throwing his spear at the mammoths, he threw it at the other tribe, The other tribe promptly returned the generosity and many humans of both tribes received die that day. On the other hand, the mammoths were completely snubbed and slunk off into the next valley to pout. Soon all tribes practiced cooperative hunting, and eventually it became the great and holy tradition of war.

Many of history's warrior-kings were generous to a fault with die. A nation with much die to distribute was seen as wealthy, so rulers began to compete to see who could be the most philanthropic. Over the centuries, this led to the hedonistic excesses known as the Second World War. Prior to the war, Germany had owed debt reparations involving die it had been provided in the previous war. Some in Germany thought they should keep the die to themselves, but the fascists believed honor demanded they pay back all the die they owed. Soon they were in power, and their leader negotiated a pact with the USSR that their two nations would reap the most die in the coming fiesta. Britain, France and Poland promised to provide some die as well, but they proved stingy, and refused to give anything unless Germany gave first. Finally Germany gave a generous amount of die to Poland, and then to France, but neither of them gave any die to Germany at all. The Germans, ever forgiving, were going to lavish die on Britain anyway, when the USSR promised endless amounts of die over on their territory.

When the British saw the Germans and Russians were having all the fun, and hogging all the die, they became very jealous. They had the Japanese convince the stingy Americans of the value of generosity. All three showed up late to the party, but they got some die as well.

But after all the die had been distributed, suddenly very few nations had any die to distribute. What die there was in big nations was all earmarked as aid to be exported to little nations, like Vietnam, Afghanistan or Angola. As a result, citizens of modern, first-world nations are often forced to live 80 years or more. Some miserable souls even live to 120 and beyond!

The ruling class has tried to cover up this poverty using propaganda campaigns to convince people that they don't actually want to die. As a result, people in countries like America and Japan constantly deprive themselves of die. They are forced to settle for watching die on television and in the movies. The least fortunate are employed distributing die in small countries like Iraq, though a few of them are given die by charitable locals.

There have been several missions to bring die back to the world, such as the die distribution of September ninth; however, first world countries are remaining stubborn and depriving themselves of die. Fortunately they have not been able to get rid of die completely, so they can still experience it to the fullest. 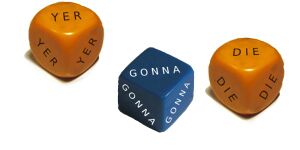 The Great Gamble of Life
Retrieved from "https://uncyclopedia.com/w/index.php?title=Die&oldid=5980936"
Category: