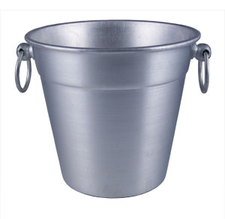 The humble bucket has existed for thousands of years, surpassing lesser tools in seniority, if it already hasn't in usefulness.

A Bucket is a cylindrical storage devices used to contain a variety of liquids. Born out of a necessity to transport liquids without them spilling onto the ground, Buckets have existed for thousands of years and have nobly served humanity throughout history. In fact, during the siege of Constantinople, buckets were used to stop fires caused by fleeing residents. Other than holding liquids, buckets also have different uses, such as holding the vomit of drunk bar patrons, dousing fires, starting fires, impromptu toilets for impatient bar patrons, and as an impromptu murder weapon for arsonists attempting burn down bars. Though other tools have been important to mankind, they all pail in comparison to the humble bucket. Could you make a pun out of an Oscillating Saw? Thought so. 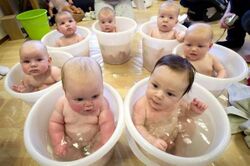 As shown by this picture, buckets can be a force of life, and a force of death, as they'll most likely drown later.

Ever since the dawn of mankind, man has needed a trusty, reliable tool to temporarily transport liquids. Unfortunately, no matter how hard one tried, you could not use your bare hands or a sheep stomach to store liquids for long periods of time without it spilling or curdling into cheese. Thus was born the need for The Bucket. Anthropologists have found evidence of early humans using primitive versions of buckets, and Lucy, the famous Early Ape, was actually found with a bucket in her hand. Unfortunately, the bucket was not identified as Lucy's until much later, as the anthropologists studying the remains had to use it to store their pickaxes and oscillating saws.

During the Middle Ages, feudal lords would use large, specially modified versions of the Bucket to pour hot, boiling oil onto invading soldiers, showing that the Bucket, a tool of peace and convenience, could also be used for war. Seeing its great power, many feudal lords stopped using the Bucket (lest it destroy everything in its path), and opted for the much safer and less powerful cannon. Fortunately, many militaries didn't exploit the Bucket's maximum potential for bloody warfare, saving the Earth from turning into a barren wasteland via a Bucket Apocalypse.

The Renaissance Period saw an explosion of uses for the bucket. Never before had the bucket so much purpose and meaning. People would use the bucket to throw out their excrement into the streets, street urchins would use it splash water into unsuspecting citizens out for a walk, and artists would use it to hold their paint. The bucket's contributions to the fine arts is uncredited in most serious works, but without it, many forms of art wouldn't have existed: a surprising amount of Avant-Garde artists today use the bucket. Without the Bucket, Michelangelo couldn't have made his masterpiece on top of the ceiling of the Sistine chapel, which required several buckets to be laid on the ground to catch paint that dripped onto the floor; without the humble tool, he would've had to paint on a canvas! 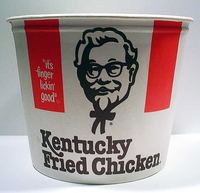 The concept of using the bucket to serve food to humans is a relatively new concept to those who aren't homeless.

Despite different tools invented to replace the Bucket, the humble tool has still managed to stay relevant in the modern world. Because of recent technological advances, the bucket has never been better, with increased storage capacity, longer storage times, and smaller sized handles, which can only be bought with a date plan and a valid credit card. The bucket has stayed relevant for thousands of years, outliving countless boy bands, governments, people, species, and ideas, making it impervious to the effects of time.

The Bucket is praised (if at all) for its grace and versatility in usage. The bucket is rivaled only by the Swiss Army Knife in number of uses, and is unmatched in grace and beauty, two traits that are rarely found in objects that aren't buckets. Aside from its obvious use as a medium to transport liquid, Buckets can also be used by engineers, plumbers, janitors, drunken arsonists, sailors, underfunded firefighters, scientists, and others. In warfare, they can be used to distract enemy soldiers and stop most heavy vehicles: nothing is more distracting to a soldier than a few gallons hot boiling water melting their eyeballs until there's nothing but empty sockets.

The bucket, like most household items, can be used to ease the process of giving birth, and can be used to feed especially rotund infants. Later in life, the bucket can be used to feed young toddlers who haven't yet learned to eat with their fingers, though you would need a large tube to use the bucket for this purpose. In gourmet dining, you can connect a tube and an ostrich's mouth to a bucket filled with bird feeder to make a giant version of Foie gras, and then use the bucket and tube to strangle people who criticize you for animal rights violations.

Even though famine, plague, pandemics, and bad hygiene may strike the Earth, the humble Bucket will continue to thrive, free from the petty concerns of the Earth. Even as the human species withers and dies, killed by bitter infighting or aforementioned bad hygiene, the bucket will be the world's lone survivor. Even if the whole universe were to be destroyed in a reality shattering event, the humble tool would be left, forever alone drifting into nothingness. Though we might be able to live without the internet or indoor plumbing, we cannot live without the bucket.