“Rugrats? Do they like, have rats crawling on rugs there? Ewww!” 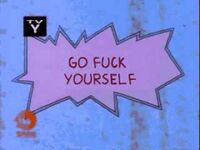 The Rugrats' most infamous episode

Rugrats is a 1990s/early 2000s American animated television series on Nickelodeon. It centers on the lives of lumpily-shaped infants who walk, talk, go on crazy adventures, and somehow remain babies for 13 years.

Rugrats is set in your typical Jewish-American household, complete with all the extras not limited to a basement full of useless inventions and some babies that spend more time in your own house than in their parents actually house.

The plot lines of the Rugrats are that of your typical '90s Nickelodeon cartoon. Extremely predictable same old, same old story lines topped up with content that is actually family friendly, I mean where's the fun in that???

For those without comedic tastes, the so-called experts at Wikipedia have an article about Rugrats.

The show revolves around five pre-teen children, three boys and two girls and their parents, oh and Grandpa and Spike the Dog. 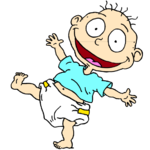 The fearless and bold Hero of our Story. Tommy Pickles

The heroic dog Spike, this guy fought a wolf in the movie ya know!

Spike - Spike is the babies dog. He possess all the regular perks of your average dog, including the ability to fight large wolves and make rap songs against angry leopards.

Grandpa - Like every single animated sitcom, The Rugrats also has your friendly neighborhood senile old man. Grandpa (Lou Pickles} is Steward Pickles father. He is renowned for being the family nuisance because he has no real home to go to.

Lou Lou - Lou Lou is Lou Pickles wife, well actually his second wife. Lou and Lou Lou have been happily married for the few short years they have known each other. She is apparently a fantastic ballroom dancer. 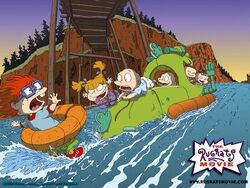 The brutality of it all, this is seriously as violent as it gets!

After the series became a global phenomenon, the creators decided to make a soap opera spinoff called All Grown Up!, where the characters, despite being only preteens, strangely act like teenagers and face the problems of teen life, such as alcohol, sexual confusion, theft, and money.