For those without comedic tastes, the self-proclaimed experts at Wikipedia have an article very remotely related to Jump the shark.

~ Aquaman on his skills

Part of the Extreme Olympics, the Jump the Shark event is middle of the road on the Carmen-Wilde lethality index, with almost 80% of competitors surviving the event. 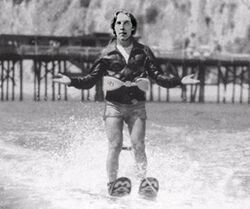 The Greek Olympics did not have this event. Greek sitcoms did vault over the horns of enraged bulls, but the bulls' teeth had been deliberately blunted as a safety precaution, and, as such, they could not deliver a fatal bite.

In 1943 Winston Churchill proposed establishing an event in which Allied television pogo-stick commandos would leap over Nazi submarines. This was abandoned when The Bermuda Project determined that pogo sticks would not provide sufficient bounce when used on television.

However, after the war Joe Stalin revived the event using a large hammerhead shark instead of nuclear-powered subs and naturally bouncy lumpenproletariat instead of pogo-stick commandos.

LSD deficiency is often cited as a probable cause.

The contestant, termed a piscador, must first perform the pasa de bandilleras by placing three triple-ought fishhooks in the shark's lips, one after the other. This enrages the shark, and it often eats two or three of the line judges at this point.

Next the piscador dons a tulle petticoat and dances on point before the shark. The shark inevitably charges, flopping forward on his great huge flukes and bellowing. The shark and the piscador then dance a pas-de-deux while a flamenco orchestra plays a fiery dirge.

In the last stage of the event the piscador takes a long thin sword and daringly leaps over the shark whilst screaming incoherently. The shark of course attempts to catch the foolish piscador in his ferocious jaws, and often succeeds in biting away two or three of his (or her) lower limbs. This actually boosts ratings. If the piscador is successful in leaping the shark without being canceled after the first season, he must use the sword to disembowel at least two Nielsen-rated viewers before being subdued by the remaining line judges.

A rare example of a shark jumping itself.

Many believe that the introduction of Scrappy Doo caused its parent program Scooby Doo to "jump the shark" in a highly metaphorical sense (it placed fifth in 1972, twelve meters behind Love American Style). These critics fail to realize that the show already sucked to begin with.

The Fonz jumped the shark successfully in 1977; this is regarded by many as the fulfillment of his role as a latter-day Jesus for his ability to walk on water.

Jerry Springer performed admirably in the 1987 Olympics, not only succeeding in leaping over the bloodthirsty beast but also in impregnating it at the same time. (The shark later gave birth to 3,000 hybrid shark/talk-show-host babies, all of which were euthanized by the Dutch.)

In 1991 Angelina Jolie lead the event up until the finals, but then bit the shark savagely on the head. The severely traumatized shark had to undergo psychotherapy at Baden-baden, and Jolie was disqualified. She later attempted to jump over Brad Pitt, but in a similar faux pas bit him on the rump.

Homestar Runner was a more promising contender near the start of the new millennium, but was unceremoniously killed when, during a practice run, the shark was hoisted out of the water by an unseen bear and began to eat Homestar's limbs first (of which there are only three) and then the promising athlete himself. Much hilarity ensued.

Jaws jumped the shark as soon as it had a sequel. Critics were particularly confused why it was set in the sky.