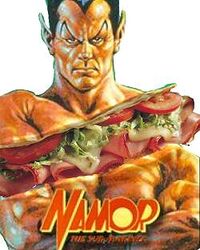 For those without comedic tastes, the so-called experts at Wikipedia have an article about Aquaman.

Aquaman is an Atlantian superhero, considered by many to be the best superhero (as voted by sea monkeys). Although Aquaman's best superpower is the ability to talk to fish and his main weakness is air, there are many superheroes that are worse than Aquaman; just not Namor the Submariner, who also can fly, ages slower, and is interesting.

Aquaman is still a virgin, despite being in his mid-60s and having fathered a child. However, Aquaman has experienced a resurgence in his cool factor by doing weed and entering the Olympics under the pseudonym Michael Phelps.

Aquaman has no superpowers besides the uncanny ability to always suck—oxygen. While swimming fast and talking to fish were considered super-human feats in the 1940's, today his abilities are easily matched by most marine biologists with basic correspondence school diplomas. Therefore, Aquaman's abilities are no longer considered "super" powers any more than a trained parrot.

Aquaman's ability to speak to sea creatures is rather irrelevant these days since fish do not really like humans any more (seeing as how we killed most of them with leaking oil pipelines, acidified oceans, melting icecaps and garbage islands. It's rumored he dated a sea urchin before being dumped. Although Aquaman is Lord & Master of the sea, he is still frequently assaulted by rogue sea animal criminals. One such example is the time Aquaman was attacked by an octopus that stumbled onto a sunken shipment of meth amphetamine, who threw eight shoes at him before being eaten by a very old sleeper shark.

Aquaman's intolerance of air is extremely disadvantageous to him considering that everything interesting happens outside of the water. This often makes Aquaman quite lonely at night. He doesn't even have fish to converse with. Since Aquaman has spent his entire life in the ocean, he has adapted to the point that he now has all sea creatures' weaknesses in addition to a human's to guns. This includes oil spills, mercury poisoning, homeless polar bears, boat propellers, algae blooms, fish hooks, and getting strangled by those plastic ring thingies that keep a six-pack together.

Aquaman was created by the United States military as propaganda during World War II. Most people didn't particularly enjoy Aquaman to begin with, and now that he was overly eager to be Uncle Sam's yes-man, nobody paid any particular attention to him during the war years, like the cleverly camouflaged chloroplasts of a squid disguised as a commercial failure sunken ship. However, Aquaman did serve a useful purpose with his revolting properties. Japanese children were so delighted with a superhero story involving sushi that a dynamic cultural shift led to the Japanese embrace of western customs that we see today. An alternative theory suggests the United States simply vaporized some of their cities, but everyone knows that splitting atoms is science fiction.

Aquaman's origin story is currently a mystery. The writers of the series were often so high that they wrote multiple story arcs without realizing it. These stories range from his life as an insane sailor to the time he was the illegitimate son of a lighthouse keeper and a manatee. The most generally accepted origin of the character, however is that he is King Arthur of the oceans, Solomon of the Seven Seas, charging into battle on a sea horse.

Supporting Cast and Other Adventures[edit] 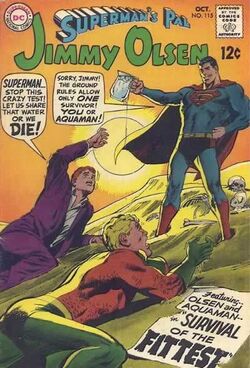 Black Manta was Aquaman's arch nemesis. Stop and think about. Aquaman's arch nemesis. If you can't do better than Aquaman, you need a new job[1]. Black Manta committed suicide in 1997, by removing his helmet for 15 seconds and breathing the air in Beijing. His suicide letter was too waterlogged to be legibly read. Basic words such as "worthless," and "pickle" were deciphered, but the police didn't spend any longer than 10 minutes tops trying to solve the case.

Things aren't bad in Atlantis under Mayor Aquaman, schools of fish are over crowded, and there's squid ink graffiti everywhere, but it's not nearly the death sentence of living in Gotham City. The fire department in Atlantis is a lot smaller than most major cities, although the sharks can smell an ambulance coming from a mile away, there's fewer homeless hermit crabs living out of their shells than in prior administrations.