Black Adam often wears makeup in public to hide his blackness. This is so he can get a seat at Olive Garden without waiting two hours.

Black Adam was the first real man according to the Crime Bible, the central holy book of the Grand Unified Church of Evil. He is commonly confused with the comic book character Captain Marvel primarily because Marvel ripped off his costume design in an attempt to ruin his reputation. Black Adam is general regarded as the father of the modern criminal justice system in the Western World. 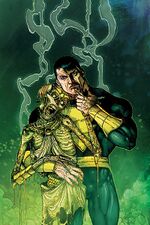 When Satan saw how poorly Adam, the biblical first man, was doing with his bitchy naked wife and his rocks, he decided to create a rival to give Adam and his descendants an even harder time. So, Satan went to Anti-Eden and from the sand made his own first man out of black jack and hookers. And he did call this new man "Black Adam" as he was to be Satan's big screw you to the All Mighty. But Black Adam was horny, and so Satan made Black Eve, who was just like regular Eve and all other women in every way. And they fornicated verily, and it was good.

A few years went by and Adam died and his people struggled to survive while Black Adam's aflorished. They built pyramids and casinos and big statues of cats to display their wanton greatness. When Adam's people, calling themselves "Jews," came to Black Adam's homeland to gamble, they were enslaved. Black Adam made them labor for tweleve years to build a 6 mile high statue of him, and when they were done, he made them watch as he knocked it down.

Adam had so much fun torturing the Jews, he made it a national pastime. Every year people would come from all over Anti-Eden to the Jew-Burning festivals held in Black Adam's honor. The tradition of torturing Jews would eventually be adopted by other cultures around the world and would inspire many people for centuries to come.

Sometime during a Gap Year after finishing college, it was discovered that Black Adam had anger issues, when he was banned from the local pub. This was the result of the Third World War, which he called with a stroke of original genius, World War III. It took a lot of superheroes (A LOT) to finally beat him. Not really though. Black Adam handed their asses to them on a silver platter, sending the Vs. Boards into an uproar. But then Black Adam beat the shit out of those pussies, too.

The events that transpired inspired the Jonas Brothers song of the same name.

As Black Adam is, in fact, black, he is capable of incredible feats beyond the range of normal human ability. These powers come from a magical acronym, not unlike Marvel. He has the stamina of Shu, and the swiftness of Heru. Black Adam is uncertain what AZAM stands for.

Black Adam once bench pressed 10 reps with a school bus packed with high schoolers, even complaining that it was too light on his 5th rep, 2 large super gorillas, Gorilla Grodd and King Kong were placed on top of the bus.

He once drank Bill Brodsky under the table.

One Day Black Adam and Chuck Norris had a round-house kick competition. It is said to be the next DC Crisis.

The fourth kill in four weeks. Black Adam was particularly proud of that one.

Black Adam has generously given the world a special inside look at the going-ons in his life for a full year, by writing a autobiography in 52 parts. The series is called 52 (there is currently much conjecture as to the meaning of the title.) As of the fourth week, Black Adam has already acquired an impressive body count of four, averaging to one brutal murder a week. This trend is expected to continue for the remaining 48 weeks, resulting in 52 kills by the series' end. Prior the series' starting, Black Adam employed a modified version of the famous "Three Stooges Two Fingered Eye Poke" to end the life of an adversary. Black Adam's formidable muscles allowed him to apply the technique with such force that the victim's eyeballs exited through the back of his skull. This technique has grown in popularity since then, and was recently used by the secret service to thwart an attack by Midget Cockpunching Terrorists on President Bush. Many of Black Adam's victims are killed in a similarly impressive manner.

Black Adam, being the portrait of justice, fairness and levelheadedness that he is, has inspired the saying "What Would Black Adam Do?" or, "WWBAD?" for short. The numerous citizens of the world who look to Black Adam for hope and guidance often try to look at unpleasant situations as if they were Black Adam himself. They often try to emulate his sense of justice, while still appreciating Black Adam's ironic brutality.