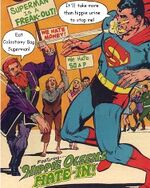 Jimmy Olsen ( b. 1927 ) is a fictional character in the Superman series published by DC Comics. Olsen is normally depicted as an angry, Irish drunk who works at the Holy Bible with Superman, and hates his fucking guts for no apparent reason.

It was often hinted at by some of the less talented Superman scribes that there was a love triangle between Superman, Lois Lane, and Jimmy Olsen, however regular continuity maintains that Olsen hates Lois just as much as he hates Superman, and only sleeps with her out of spite.

Like most Superman villains (cough, Lex Luthor, cough) Jimmy Olsen does not actually possess any superpowers, preferring instead to rely on his ethnic propensity for violence and booze-fueled rages. At one point Olsen did employ a Kryptonite shillelagh, but abandoned the weapon when it was later discovered that its radiation was growing a tumor in his brain the size of a grapefruit.

Jimmy Olsen was originally created by Jerry Siegel & Joe Shuster as an unflattering caricature of rival comic book creator Stan Lee. The Golden Age Jimmy Olsen would typically stumble around New York stinking drunk, yelling out such Stan Lee-isms as "Webshooters!" and "Excelsior!" before running into some sort of trouble that Superman would have to rescue him from. Afterwards Olsen would often curl into a ball and cry over the shame of his own unmanliness, to which Superman would cheerfully kick him in the crotch before flying off. 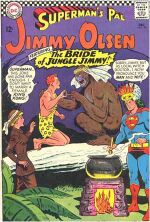 In the Silver Age Jimmy Olsen was completely reinvented, mainly because the writers of that time were too doped up on ether to remember anything about the Jimmy Olsen of the Golden Age. Now it was revealed that his original name had been James O'McIrishman, before the screws at Ellis Island changed it. Still a stumbling drunk, Jimmy Olsen took on a darker aspect, now sporting his trademark Green Shamrock Suit ( which was colored purple because all the green markers at DC were being used to make Green Lantern ) and a fierce temper. Where before Superman had been like a drunken frat boy to Jimmy's ugly girl home alone, they were now bitter enemies, and many a Superman tale revolved around Supes having to beat Jimmy down, yet again, for being a belligerent, Irish drunk.

It was during the Dark Age of Comics that Jimmy Olsen was finally retconned into the character that is recognizable by comic book collectors today. Jimmy was now inexplicablly linked to IRA terrorism, and would only speak in the Irish language. The majority of Golden & Silver Age characters were killed by car bombs, and the comic books would contain scenes where Jimmy habitually slapped women in his office around, usually accompanied by incomprehensible Irish cursing. It was at this time that Superman achieved his ultimate victory over Olsen, having him deported just before Jimmy was about to receive hospital treatment for his alcohol-induced liver failure. 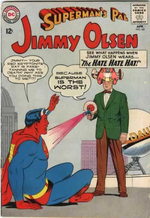 Oh jeez, how did he get his hands on kryptonite AGAIN?

Jimmy Olsen is sometimes depicted as Superman's pal, although Superman despises him. This is what Superman had to say about Jimmy.

“I really don't like that kid. He's brought me a lot of trouble over the years. Always in drunken bar fights. That's how these gingers are. Always drinking. He's a little Conan O'Brien. I feel kinda sorry for him, but he can be a jerk. He's always saying stuff behind your back, and he and his geek friends are always at my house playing RuneScape. I think there gay. Not the cool kind of gay like Batman & Robin, but, you know, actually gay.”

In response, Jimmy Olsen threw an angry cat with kryptonite fur at a picture of Superman.

Knowing Jimmy Olsen though, it's only a matter of time before he comes back to trouble the Man of Steel once more.

Furthermore, if Olsen wasn't friends with Superman, he wouldn't be getting all his crazy-ass super powers which last, like, a week before they're gone, leaving Jimmy running around Metropolis in tights like some sort of lunatic jazz dancer.

Not like it was much worse than that green sport jacket and/or sweater vest with tan slacks ensemble he wore when he didn't eat something from outer space or fall into a box of radiation.