Goys may not have enough chutzpah to understand Jewish wit. Kvetch about it all you want, but that won't help you understand it. Fill your kepellah with knowledge more suited for you.
Whoops! Maybe you were looking for God?

“I was sitting in my office thinking, 'what could Jack Kirby my next superhero's powers be?' I already had one that was super strong, one that could fly, one that could stretch, and an irritating woman, so I needed something that was original. And then I saw this fly sticking to the wall, and I decided that would be his power. But what would I call them? The Incredible Insectoid? No, that was terrible. Fly Man? Than it dawned on me, Stripperella, after the fly strips! Just look at dose gazoongas, dems some nice yams. Hummana hummana! AROOGA!”

~ Stan Lee on giving young girls and older men at strip clubs someone to look up to, metaphorically and literally. 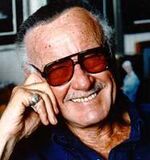 WTF is up with that hairline? Seriously.

“So now that I had my own Wonder Woman, I found myself sitting in my office (again) thinking of a superhero to be the equivalent of DC's Superman. And that's when I thought of a character who's power would be like a magic-version of Superman's powers. I'd have him look the opposite of Superman. long hair, bearded and wearing shabby robes instead of luxury spandex. And that's how I came up with our main character for that book, Jesus Christ.”

“Who Wants to Be a Superhero? Not me, I always preferred the villains! I'll see you in hell Jack before your widow sees any royalties, your contract was work for hire! MWAHAHAHA!!!”

~ Stan Lee on robbing Jack Kirby of his legacy.

Stan Lee was born to Bruce Lee and his wife, Radiation Girl. His name given to him at birth was Stanley Lee Lee. He was the only child out of fifteen that had no birth defects, his defective siblings inspiring him when creating the comics "Defecto" and "X-Men" Many of his sibling went on to have successful careers. His twin brother, Hugh Heffner, owned a large mansion and lives with genetically engineered Rabbit-Human hybrids.

When Stan was a small kid, he created two heroes: Steroidman and The Spooker. However, people didn't like them and they failed, but two kids from the ghetto in the Bronx beat him up and stole his ideas, changing the names of the character, and now they are rich. How? Steroidman became Superman and The Spooker the Will Eisner's The Spirit. After discovering that creating characters was 'for chumps', he begin to steal the ideas of 'honest hard working suckers', and so, Marvel Comics were born.

When Stan was 12 years old, his parents volunteered him for an experimental procedure to permanently freeze his body's growth and deterioration while his mind matured indefinitely; in other words, he would live forever but always look 12. Oscar Wilde, looking on as he always did (as he is an omnipresent being), saw what his parents, the surgeons, and Stan himself could not see: that to appear 12 years old forever is a horrifying curse rather than a blessing (he was having premonitions of Justin Bieber even then). He intervened, but in the middle of the procedure. As a result, the opposite of the intended effect occurred: though Stan would age physically, he would always be an annoying, conceited, whiny 12-year-old.

He was later hired by Marvel Comics to feed Jack Kirby fish heads in his cage during lunchtime between performances. During one of Kirby's tranquilizer induced comas following an escape onto a nearby construction site that had cost one of his handlers an eye during the capture, Stan had to take over for a few hours while the beast slept it off. That show off artist would always rub in his talent when he would attempt to learn how to draw and Jack would just doodle something five times better looking using his foot, the nerve of some people. Stan had been tasked with coming up with a new super hero, one that was original and interesting. As those were the good old days when it was common practice for creatives on Madison Avenue to be constantly shit faced drunk at work, Stan was drinking bourbon, wishing he didn't have to bother to yell at his hot red head secretary Jean to ice his drink, and wouldn't it be nice if she just knew what he needed without him having to use the intercom? That's when he realized those were powers every executive wishes they had, and that he was onto something. On a roll, Stan took out his dime bag of weed from his hollowed out bible needing more inspiration, as he got high as he continued to wrack his amazing brain over the next big thing in comics. While he waited for the elevator to go upstairs he realized he wouldn't have to wait for any more elevators if he could just fly up the side of the building, when the elevator arrived he said "finally!" offending a crippled bald man in a wheelchair who asked him why he didn't just take the stairs. "I didn't risk my life writing training manuals and scripts for the army as a poet to take this kind of guff from a know it all civilian like you!" Stan responded. "Actually I have a souvenir from Korea lodged in my spine from my time as a medic, nowadays though I teach special needs and at risk children and volunteer my time helping out the civil rights movement." the man retorted. "Korea? Pft! That wasn't even a real war," belittled an angry Stan before walking out to show the boss what he had come up with.

His boss hated it, no little kid wanted to fight crime as some bald dude in a wheelchair, so he shelved it for now, people just weren't ready for the X-Men yet. After three days without sleep he was about to call it quits and throw in the towel when he spotted a spider climbing up the wall and swatted it with a newspaper with a headline on a nuclear spill. Thus Spiderman was born.

Spiderman was a smash hit and within a decade Stan was rolling in money. He took temporary leave from Marvel to enjoy his wealth and there are many stories and claims about what Stan got up to during his holidays. One such incident noted is that he got into one of his many legendary fights with 13th Level Wizard Alan Moore in a bar in Dorset, devastating the local countryside and putting the badger on the endangered species list. Moore almost won the day were it not for Stan's patented Spidersense, and that Alan had consumed 4 gallons of Absinthe intravenously and had to return to the future before the time portal closed or else be stranded back in time during an era when you weren't allowed to have adult subject matter in comic books and he'd have to write boring schlock. For More Information see the article on The Adventures of Stan Lee's Toupee.

For a time, Stan Lee lived with his man, Houseroy at the Mockingbird Estate in Mississipi, receiving a weekly paycheck from the mouth of a statue located in the living room. During the 1970's, Lee temporarily became the manager of David Copperfield, an escape artist from the parallel world of New Genesis. This stint was interrupted when Lee stole Copperfield's Star Trek communicator. While attempting to operate the communicator which he thought was a device to cure baldness, Lee accidentally operated a homing beacon that was sent to the planet Apokolips. This caused a group of feminist Nazi lesbians to beam to Earth and trash Lee's house in revenge for sexist remarks Lee allegedly made about Wonder Woman. It is often speculated that Jack Kirby alerted the feminazis to the location of Lee's house.

When Stan returned to Marvel, things had gotten out of control. Many of Stan's beloved creations had been killed multiple times, and had to be recreated by the hands of drunks, thugs and Brian Bendis. Frank Miller had changed Daredevil from a Catholic do-gooder to a Satanic Assassin and Garth Ennis had changed The Punisher's story lines from gritty realistic crime sagas into a kind of playhouse theater show. Even his Arch-Nemesis Alan Moore had been hired by Marvel to write about lesbian orgies--one of the few positive and lucrative changes.

Stan decided that if Marvel was to once again become the pillar of society that it used to be, then he needed absolute control. He made a bargain with John Constantine and the masters of Orion in order for him to have God-like control over his creations. However, rather than becoming the supreme being of universe-616, Stan simply became part of a living tribunal of gods. He is currently subordinate only to Making More Money Through Alternate Covers and Rehashed Status-Quo-Restoring Event Books. Against the two mighty beings, Lee can only do so much good for his characters. However, in a ludicrous and implausible development, he once shot Ed Brubaker with a bullet that sent him into the future, before he returned six months later. Irritated by this, he did a similar thing to Grant Morrison after shaving him bald to steal his hair for his toupee.

When he's not in Hollywood doing another cameo appearance for a movie or TV show that he might have possibly thought about vaguely sometime in the past, Lee resides in his Sanctum Sanctorum, located in Greenwich Village.

Stan Lee has always been the bitter rival of Alan Moore, having met the 13th level wizard at various points throughout his life as he travels backwards in time like Merlin towards the moment of creation. Some say that it started because Stan could only get his Night Elf Rogue to level 7, while Alan is a 13th Level Wizard and can summon lesbians to assist him in his absinthe fueled rampages in southern England (and sometimes Glasgow), which is seriously cool when all you can do is shadowmeld and turn into a wisp for corpse retrievals. The truth behind it was that Stan saw no need to introduce pathos or melodrama into his stories, whereas Alan could make stones weep.

In 2001, after much level-grinding on Lee's part, Moore and Lee faced each other in a magical duel. When it seemed Stan would be defeated, he stole the rights to "Captain Marvel" and beat Moore into submission by pretending to be a dyslexic 12 year old dying of cancer after injecting himself with radioactive waste to get superpowers, and tricking Alan Moore into spelling his name backwards, his only weakness.

On the premiere of "Spider-Man" the motion picture, Stan Lee was confused on whether Toby had real powers or not...He's still convinced til this day that Toby is

He was also slated by many of his critics for stating that he thought Kirsten Dunst looked like "a ginger Miss Piggy".